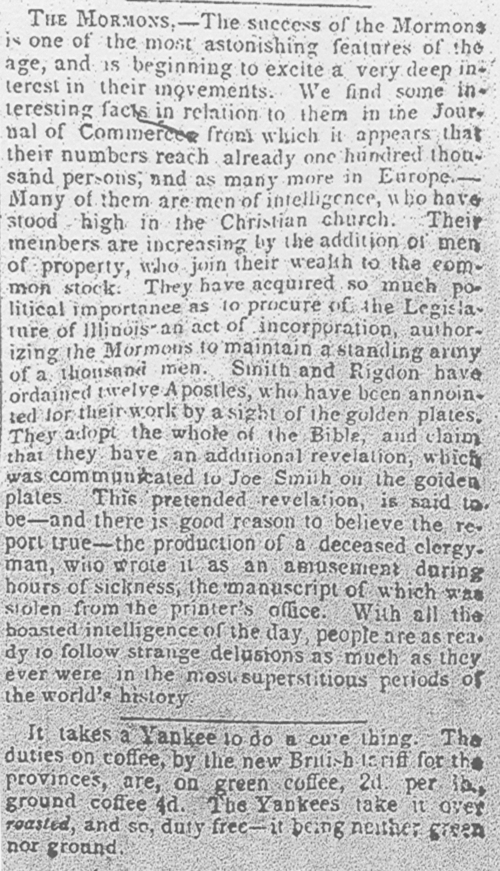 THE MORMONS.—The success of the Mormons is one of the most astonishing features of the age, and is beginning to excite a very deep interest in their movements. We find some interesting facts in relation to them in the Journal of Commerce from which it appears that their numbers reach already one hundred thousand persons, and as many more in Europe.—Many of them are men of intelligence, who have stood high in the Christian church. Their members are increasing by the addition of men of property, who join their wealth to the common stock. They have acquired so much political importance as to procure of the Legislature of Illinois an act of incorporation, authorizing the Mormons to maintain a standing army of a thousand men. Smith and Rigdon have ordained twelve Apostles, who have been annointed for their work by a sight of the golden plates. They adopt the whole of the Bible, and claim that they have an additional revelation, which was communicated to Joe Smith on the golden plates. This pretended revelation, is said to be—and there is good reason to believe the report true—the production of a deceased clergyman, who wrote it as an amusement during hours of sickness, the manuscript of which was stolen from the printer’s office. With all the boasted intelligence of the day, people are as ready to follow strange delusions as much as they ever were in the most superstitious periods of the world’s history.