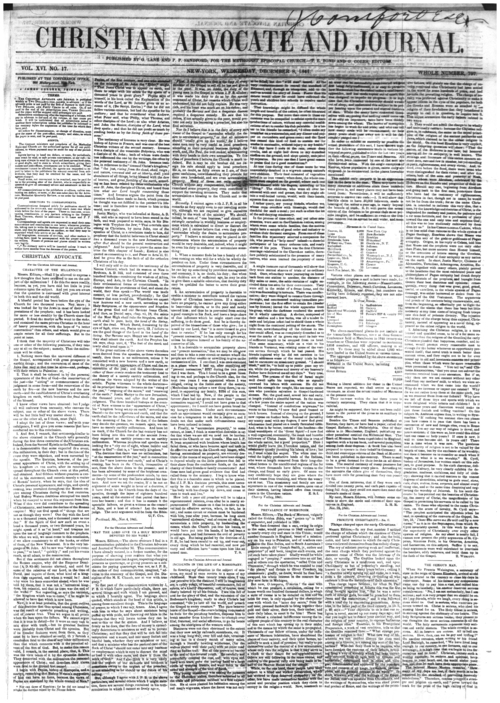 Messrs. Editors,—The Book of Mormon, vulgarly called the Golden Bible, was “gotten up” in 1827 et sequenter, and published in 1830.

Who then dreamed that a sect, owing its origin to the same, would previous to 1842 extend itself to nearly every city and state in this Union; would number thousands in England, boast of a missionary on his way to Palestine, and of teachers emigrated to the East Indies, and to South Australasia?

Little enough did “Joseph Smith, jr., author and proprietor” of said book, imagine such events, and yet such have taken place! Gladly would he while engaged in “peeping;” sometimes into an old hat, and at others into the spectacles, “called Urim and Thummim,” through which he was enabled to read “the plates,” and dictate to Oliver Cowdery, his amanuensis; gladly, no doubt, would he then have swapped his whole interest in the concern for a fifty acre farm in Michigan.

But now, O tempora, O mores! the ease with which he can produce a revelation, calling for a house worth one hundred thousand dollars, in which a suite of rooms is to be entailed on him and his heirs for ever, is only equaled by the obsequiousness with which the “latter day saints,” from far and near, proceed forthwith to bring together their gold and their silver, their iron, their timber, and their daily labor, to erect it for him! There has been almost a criminal indifference among the intelligent people of this country to the real character of this sect which has sprung up in their midst, and to the means by which the same is propagated. Thousands of our fellow citizens, under the influence of Mormon infatuation, have abandoned the places of their nativity, and their quiet homes, nominally to seek a land of promise; but really to put themselves under the control of a few adventurers, whose only care for religion is that it may serve as a cloak to their desire for self-aggrandizement. Others are still following in the same course, and rushing to the general rally now being made in behalf of the Nauvoo House and the temple.

While, on the other hand, these people have been subject to a blind and wicked persecution, which has secured to them deserved sympathy; on the other, few have made themselves familiar with the actual and peculiar position which they claim to occupy in the religious world. Now, inasmuch as no error can be successfully coatroverted without first being fully understood, it is easy to perceive how Mormonism has flourished under a misdirected opposition, and has made capital out of much that was designed to impede its progress. It is high time that the Christian community should awake out of sleep, and understand this subject in its proper bearing upon the present and eternal destinies of men. While the many have contented themselves with supposing that nothing could come out of so silly an imposture, tares have been thickly sown among the wheat. The leaven of corruption has begun to work far and wide, and who can tell how many souls will be contaminated, or how many years shall pass away ere it will be thoroughly purged out?

In order to exhibit as correctly as possible the actual prevalence of this sect, I have thrown together the following statements made in various letters and reports, published within the last two years in their official paper, the Times and Seasons. All who have been immersed by one of the sect are denominated saints. With the single exception of Nauvoo, whose population is given, saints only are supposed to be enumerated in the places hereafter mentioned.

This exhibit only purports to be an approximation to the facts in the case. There may have been many removals or additions since these numbers were given in, and many places may not have been heard from. Nevertheless, it will be sufficiently accurate to answer two ends:—1. It will show that Smith’s claim to have 50,000 followers, made in hearing of the writer a year ago, is vastly beyond the bounds of truth. 2. It will prove the actual extent of the delusion to be greater than most persons imagine, and be sufficient to awaken the liveliest concern lest its spread be still wider, and more pernicious.

Mormons in the United States.

Various other places are mentioned in which considerable progress is said to have been made, for example, in the following states:—Massachusetts, Connecticut, Delaware, South Carolina, Louisiana, Kentucky, Illinois, and Ohio; but numbers not having been definitely reported, they are not enumerated here.

The above-mentioned places do not include all the transatlantic Mormons, since at their General Conference held at Manchester in 1840 twenty-six branches or Churches were reported as containing 3,616 members, and 402 officers, making in all 4,018. To these may be added about 1,000 who have landed in the United States at various times.

The aggregate furnished by the above statements is as follows:—

Mormons in the United States, including emigrants 6,900

Making a liberal addition for those in the United States not reported, we shall arrive at TWELVE THOUSAND, as about the actual number of Mormons at the present time.

Their increase within the last three years is certainly surprising. They claim that it is unparalleled.

As might be supposed, they have not been indifferent to the power of the press as an auxiliary to their efforts.

Besides the Times and Seasons published at Nauvoo, they have, or have had a paper, called the Gospel Reflector, at Philadelphia. One of their elders is in Manchester, England, publishing another periodical entitled the Millennial Star. The Book of Mormon has been republished in England together with a hymn book, and several pamphlets setting forth their dogmas. A book has also been prepared to operate in their behalf in Germany. A third and stereotype edition of the Book of Mormon has been published in this country. There is said to be a great demand for their books in all directions. The morbid curiosity of many procures for them hearers in almost every place. According to the accounts the elders give of themselves, they have more calls for preaching than they can possibly fill.

One of them intimates, that if they were each divided into twenty parts, and each part capable of doing full duty, they could not more than meet the demands made of them.

My next, Messrs. Editors, will contain some extracts to show the mode and extent of their operations in England.