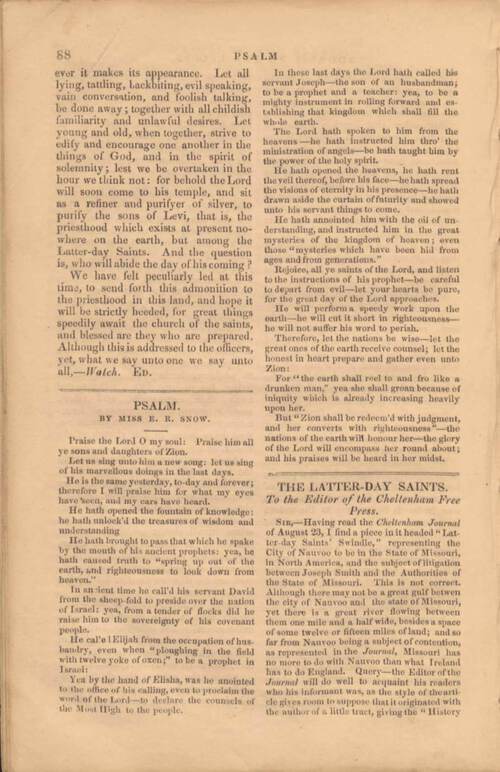 To the Editor of the Cheltenham Free Press.

SIR,—Having read the Cheltenham Journal of August 23, I find a piece in it headed “Latter-day Saints’ Swindle,” representing the City of Nauvoo to be in the State of Missouri, in North America, and the subject of litigation between Joseph Smith and the Authorities of the State of Missouri. This is not correct. Although there may not be a great gulf betwen the city of Nauvoo and the state of Missouri, yet there is a great river flowing between them one mile and a half wide, besides a space of some twelve or fifteen miles of land; and so far from Nauvoo being a subject of contention, as represented in the Journal, Missouri has no more to do with Nauvoo than what Ireland has to do England. Query—the Editor of the Journal will do well to acquaint his readers who his informant was, as the style of the article gives room to suppose that it originated with the author of a little tract, giving the “History [88] of Kentucky Tom,”* and I think, Sir, you will agree with me (after perusing the following), that the entire statement as given in the Journal, is a tissue of lies, got up by a malignant and depraved heart, for the worst and most diabolical purpose, in reading which we blush for humanity. On the 10th inst., I called at the residence of Mr. Margretts, with the hope of obtaining a personal interview with him, but although I was disappointed in this, as he was not at home, I was very kindly received by Mrs. Margretts his wife, and likewise his family. I proposed to Mrs. Margretts the following questions, and she gave me the following answers:—Ques—Have you and Mr. Margretts been to the city of Nauvoo? Ans.—Yes, we have. Ques.—What were your reasons for returning back to England? Ans.—I was not very well the short time I was there, and we did not find every thing so convenient as we expected, so me and my husband determined to return to England. Ques.—

Is Nauvoo a fine city? Ans.—No, it is not yet, but in a few years’ time it will be. Ques.—Is the land generally good in that part? Ans.—Yes I think it is the finest land I ever saw. Ques.—Were you and your husband put in prison when you arrived there? Ans.—No, we were not. Ques.—

Did any one ask you to deliver up your money to them? Ans.—No, but we had 10 per cent, offered us for our money. Ques.—Did your husband ask Mr. J. Smith to show him the plates that the Book of Mormon was engraven on? Ans.—No, my husband did not ask him, but another brother (or Saint) told my husband that he heard somebody else say that he knew a man that said he heard Mr. Smith say that an angel took them away again. Ques.—Did you make your escape secretly? Ans.—Why no, Sir, that would have been impossible, for we had more than a ton weight of luggage; besides, we had no need of coming away in that manner, we went on board a steamer between nine and ten o’clock in the morning, in company with five missionaries that were going to take their different locations upon that Continent.

The following information I received from Mr. Embry, a person in whose house Mr. Margretts and family now reside. I have been acquainted with Mr. Margretts upwards of thirteen years; he was never of any religious persuasion prior to his becoming a Latter-day Saint; he was never truly converted, for he knows nothing of a change of heart. I belong to the Latter-day Saints, and I believe their doctrines.

The following was given me by Mrs. Embry:—Ques.—Are you a member of the Saints?

Ans.—I am, for anything I know to the contrary; but I know I have not attended of late as I ought

* A little Tract, addressed “To the Followers of the Latter-day Saints,” signed “D. L. St. Clair. to have done Ques.—Do you believe in the doctrines the Saints teach? Ans.—I do; for I have experienced their power.

The above is the substance of what I was enabled to gather during my stay with those individuals, which every honest mind will admit sufficient to prove by what spirit those persons are led who, in order to put down a cause they do not approve, embrace every opportunity to fill the mouths of the world and the columns of the public prints with lies and slander.

A copy of a certifieate I have in my possession:—“This is to certify, that Mr. Joseph White has been in company with Mrs. Margretts, the wife of Thomas Margretts, and five of her children, and it is not on our account that all those false statements have been published, for we believe in the doctrine that the Latter-day Saints preach, having witnessed its power. Witness our hands this 10th day of Sept. 1841. Elizabeth Margretts, Joseph Embry, Sarah Embry, Leigh.”

Now, Mr. Editor, it remains for the Journal, to prove his authority for having given publicity to such barefaced falsehoods and glaring inconsistencies. No man having the slightest knowledge of that part of America the Saints are now peopling, to say nothing of the statements that have been made by the Margretts to many who are ready to come forward and prove to the contrary of what the Journal says, could give the smallest credence to such a budget of slander.

An admirer of your excellent publication.

MINISTER OF THE GOSPEL.