An Address to the Citizens of Salem (Mass.) and Vicinity 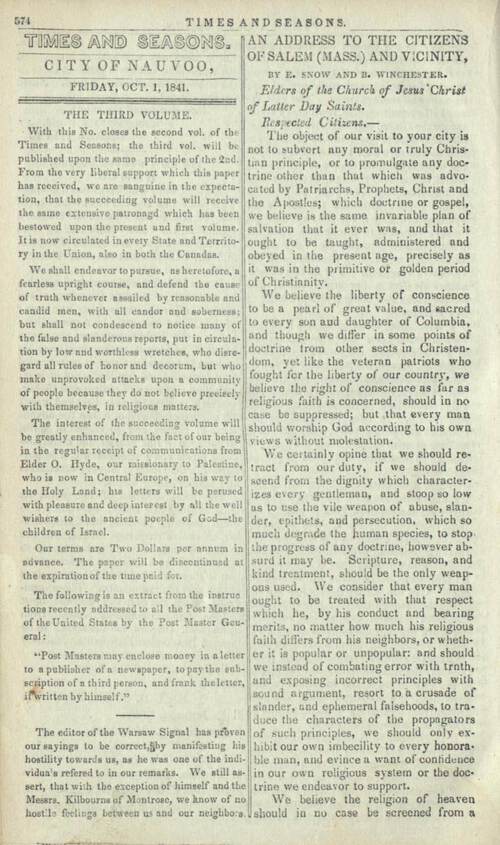 AN ADDRESS TO THE CITIZENS OF SALEM (MASS.) AND VICINITY,

BY E. SNOW AND B. WINCHESTER.

Elders of the Church of Jesus Christ of Latter Day Saints.

The object of our visit to your city is not to subvert any moral or truly Christian principle, or to promulgate any doctrine other than that which was advocated by Patriarchs, Prophets, Christ and the Apostles; which doctrine or gospel, we believe is the same invariable plan of salvation that it ever was, and that it ought to be taught, administered and obeyed in the present age, precisely as it was in the primitive or golden period of Christianity.

We believe the liberty of conscience to be a pearl of great value, and sacred to every son and daughter of Columbia, and though we differ in some points of doctrine from other sects in Christendom, yet like the veteran patriots who fought for the liberty of our country, we believe the right of conscience as far as religious faith is concerned, should in no case be suppressed; but that every man should worship God according to his own views without molestation.

We certainly opine that we should retract from our duty, if we should descend from the dignity which characterizes every gentleman, and stoop so low as to use the vile weapon of abuse, slander, epithets, and persecution, which so much degrade the human species, to stop the progress of any doctrine, however absurd it may be. Scripture, reason, and kind treatment, should be the only weapons used. We consider that every man ought to be treated with that respect which he, by his conduct and bearing merits, no matter how much his religious faith differs from his neighbors, or whether it is popular or unpopular: and should we instead of combating error with truth, and exposing incorrect principles with sound argument, resort to a crusade of slander, and ephemeral falsehoods, to traduce the characters of the propagators of such principles, we should only exhibit our own imbecility to every honorable man, and evince a want of confidence in our own religious system or the doctrine we endeavor to support.

We believe the religion of heaven should in no case be screened from a [574] candid and scriptural investigation. The scriptures, like the great ruler of the day, shed forth their rays of light to direct the footsteps of the traveller to eternity, and to enable him to shun the dark and winding ways of error and superstition until the day-star arise in his heart. They should be the test by which all religious matters should be tried, and the great regulator of our faith.

Rumor with her ten thousand poisonous tongues, though ever busy, should never be a criterian by which we should justify or condemn any man or set of men. The Jews condemned Christ and his apostles from evil reports, and came to a conclusion that they were the worst of deceivers: and why did they come to such a conclusion? because they were bigots and refused to hear but one side of the question. In this respect we as a people have reason to complain of our cotemporaries. Not that we think prejudice against us under present circumstances, is easily to be avoided; neither was it in the days of Christ, and his apostles: for there were more men in number to testify against them, than there was for them; but as they were judged rashly, so have we been; and the result has been that we have suffered much from the barbarous hand of persecution. No sooner had a few men, whose pecuniary means were small, (but who previously bore the character of respectable citizens) bore testimony of the truths we have embraced, than the people began to rage, and the cry of “delusion,” “fanaticism,” “false prophets,” and “Mormonism,” was heard from one end of our country to the other, and many have joined in the uproar who have scarcely heard the first sylable on the part of the defensive.—Editors have paraded before the public all kinds of tales and vulgar reports that men in their imaginations could invent concerning us, (a society of whose real principles most of them know nothing of, but from hearsay,) to decoy the public mind from the field of candid investigation, and like the Ephesians, to raise a tremendous uproar, and thus drown the voice of the innocent,—the voice of defence,—the voice of TRUTH!—this being the most effectual way to impede the progress of the work; but scripture and common sense are set aside as though they were useless. We court investigation; but we will never descend to traduce character in order to oppose doctrine; neither will we condemn from the hearing of one side of the question only: “A fool judgeth a matter before he heareth it.”—SOLOMON. “Doth our law judge a man before it heareth him.”—NICODEMUS It is reported that Joseph Smith, who was the first in reformation or the commencement of this work which we have espoused, is of notorious bad character. To this we reply, that his moral character before he experienced religion was equally good with any other respectable citizen of the state of New York; since that time, if reports are to be credited, (which by the by we avowedly denounce as falsehoods,) he has become a very bad man. The Apostle Paul sustained a good character among the Jews, till he became a christian, then let his accusers tell the story, he became one of the worst men that was ever on the earth;—so notoriously bad that they brought an accusation against him for sedition or treason.

When we consider that religionists and non-professors anciently spoke all manner of evil falsely against Christ and the apostles, we are not astonished that editors, priests, and people, should publish all manner of evil falsely against Mr. Smith, and others of the society, seeing that they have adopted the same faith, contended for the same spiritual blessings, and practiced the ordinances that primitive saints did.

It has been stated in public journals that we hold all things in common, or that we have a community of goods, also of wives. These charges we positively deny: for we hold to no such things nor never did; neither do those who become members of the society give up their property to the leading men of it. We raise money by subscription for the purpose of erecting public places for worship, and the support of the poor. The rules of the church forbid any thing like unvirtuous conduct, and they are rigorously enforced, when there is any occasion whatever for it. It has been said, that the whole society are a set of seditious persons, not willing to conform to the laws of the country.

This is also false, for we highly esteem the laws of our country, and we chalenge the world to prove by affidavit, or by other creditable testimony, that the society as a body, have ever been, for the first time, insubor- [575] dinate. There have been unruly members, but for the want of penitence they were excluded from the church. The same may be said of all the Orthodox societies.

It has also been stated as a fact, that we have unlawfully taken possession of a large tract of land in Iowa, and claimed a title direct from heaven. This is equally false with the other charges before mentioned; for it is but a short time since. Dr. I. Galland, who sold most of the above mentioned land to individuals of the society, published an article in one of the Philadelphia papers, contradicting the report, stating that he had in his possession the obligations of the purchasers, which he could show, and Mr. Snow hereby states that he wrote most of the deeds for said land, in June, 1839. Indeed, such reports are only got up to excite prejudice and indignation against us.

Some man who was somewhat fruitful in imagination, has written a letter to some New England editor, stating that the Mormrns, so called, were making preparations to make war with their neighbors, &c. Now this is the foolish imagination of some anonymous letter writer, who did not really know the difference between a meeting-house and a fort. Some of the society are obliged to do military service, and all the military operations, or organizations, that we know of in Illinois, where the leading men of the society reside, are done by the authority and according to the laws of the State. If this is a preparation for war, then all the State of Illinois are preparing for war.

Another scurrilous tale has been paraded before the pablic, saying that we discard the sacred Scriptures, viz: the Old and New Testaments. Such a report is awfully absurd.

Indeed, we esteem them as highly as any other men, so much so, that we consider the New Testament supersedes the necessity of all creeds, liturgies, and books of divinity that men ever have or can invent.

Some pretend to say, that we preach another gospel, This is a misrepresentation, for we believe that no other gospel but that which Paul preached, is the power of God unto salvation, who says: “Though we or an angel from heaven preach any other gospel unto you, than that which we have preached unto you let him be accursed.”

Again, some of our opponents have the audacity to assert that the position we take encourages immorality. This is also a wanton implication without the least shadow of truth. Hear our lectures, and read our books, and then judge.

We might seperately speak of several other tales that are afloat, and occasionally drift into the mouths of the retailers of slander, which are ridiculous and absurd, such as the new-bible story, money diging story, walking on the water story, the Spaulding romance story, the murder of Martin Harris by Joseph Smith, who by the by, is still living and a member of the society, and knew nothing of his being murdered till he read the account of it in the newspapers, which came so well authenticated that we never have heard of his having any disposisition to controvert it!! But we think that we have dwelt sufficiently long on evil reports: for should we examine each one distinctly, and refute it by a plain statement of facts, our enemies would coin new ones; for no sooner are they detected in one, than they put another in circulation. We now turn from the wickedness of men, to make mention of the righteousness of the Great God, and our faith in his precepts.

(TO BE CONCLUDED NEXT NO.)