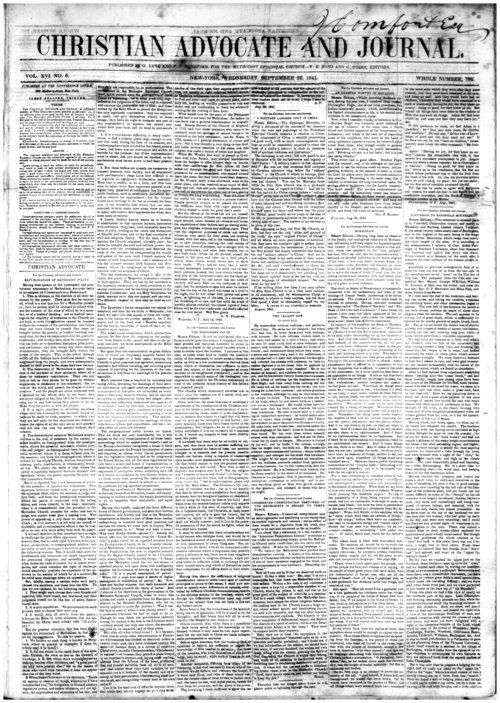 Messrs. Editors,—Having long been an observer of the deadly and contagious influence of Mormonism, and seeing with deep regret the apparent apathy that existed in the Churches in regard to this subject, while the standard of the “false prophet” has been lifted up, and, like the magician’s wand, it beckons its deluded followers to the fertile regions of the west; it was with much pleasure I saw, in a late number of the Advocate and Journal, an exposure of some of its false assertions. Hoping thereby to serve the cause of truth, I send you the following extracts and remarks, to be laid before your numerous readers, if you shall consider them worthy of a place in your columns. O. S.

The truth or falsity of Mormonism is inseparably connected with the authenticity and truth of the writings of Joseph Smith, purporting to be divine revelations. The evidence of their truth must be internal or external. Having carefully examined the books called “The Book of Mormon,” and “The Book of Doctrine and Covenants,” I have found, on almost every page, the black signature of the deceiver. They cannot justly claim the sanction of good sense; much less of divine inspiration.

In support of this assertion, see Book of Mormon, page 68, Pratt & Goodson’s edition: “Wherefore he [Messiah] is the first fruits unto God, inasmuch as he shall make intercession for all the children of men. And they that believe in him shall be saved. And because of the intercession for all; all men come unto God, wherefore they stand in the presence of him, to be judged of him, according to the truth and holiness which is in him.

Wherefore of the law which the holy one hath given unto the inflicting of the punishment which is affixed; which punishment that is affixed is in opposition to that of the happiness that is affixed, to answer the ends of the atonement; for it must needs be that there is an opposition in all things. If not so my first-born in the wilderness could not be brought to pass, neither wickedness; neither holiness nor misery; neither good nor bad.

Wherefore all things must needs be a compound in one; wherefore if it shall be one body, it must needs remain as dead, having no life, neither death, nor corruption, nor incorruption; happiness nor misery, neither sense nor insensibility. Wherefore it must needs have been created for a thing of naught. Wherefore there would have been no purpose in the end of its creation. Wherefore this thing must needs destroy the wisdom of God and his eternal purposes, and also the power, and mercy, and the justice of God. And if ye say there is no law, ye shall say there is no sin. And if ye shall say there is no sin, ye shall say also there is no righteousness. And if there be no righteousness, there be no happiness. And if there be no righteousness nor happiness, there be no punishment nor misery. And if these things are not, there is no God. And if there is no God, then we are not; neither the earth; for there could have been no creation of things, neither to act, nor to be acted upon, wherefore all things must have vanished away.” Here we have a part of the dying instructions of the “prophet Lehi;” abounding with contradictory absurdity, and fit to be classed only with the ravings of a maniac.

For a man pretending to common sense to talk of things having neither life nor death!—corruption nor incorruption!—neither sense nor insensibility! is the climax of absurdity. What shall we say then of him who claims the direction of Infinite Wisdom while penning this senseless jargon! To talk of the possibility of a thing being created without sense, and yet not insensible, is enough to make an honest man blush; but here we have it proclaimed in the ears of the world as a revelation from the Almighty! When will Smith, or his satellites, tell us, as “there could have been no creation of things,” how “all things,” before they have an existence, can take to themselves wings and “vanish away?” Surely the wise man was mistaken; for an uncreated creation is something “new under the sun!” O! fallen, fallen man, blush for thy fellow’s shame.

The whole book is filled with discordant nonsense. To mention all, would be to re-write the whole. Even the blessed Saviour is made to appear equally ridiculous; for prophets, priests, historians, kings, Jesus, angels, and all, use the same invariable and inexplicable language. See page 500.

“There came a voice again unto the people, and all the people did hear and witness of it, saying: O ye people of these great cities, that have fallen, who are descendants of Jacob—yea, who are of the house of Israel—how oft have I gathered you, as a hen gathereth her chickens under her wings, and nourished you.”

If the whole book bore the marks of truth, this exception alone would be enough to expose the imposition. Here Jesus Christ is represented as speaking from the heavens, to the people of cities just destroyed, who were all buried in the ruins, together with the people of Jerusalem, except a few here in America “who were spared;” and that too in language abounding with blundering absurdity. Christ’s pathetic exclamation, “O Jerusalem, Jerusalem,” &c., as he looked down upon that devoted city, was the height at tender sublimity; but this is sickening and foolish.

If this quotation be truth, we find Adam in a quondary; for “God said unto them, Be fruitful, and multiply.” He said also, “Of the tree of knowledge, of good and evil, thou shalt not eat.” If he does not eat, he can “have no children,” consequently must break the other command, “Be fruitful.”

Again: “Having no joy, for they knew no misery,” carries the abominable idea with it, that misery is a necessary prerequisite to joy. Angels have joy when a sinner repents; but is there misery in heaven? “Doing no good, for they knew no sin,” drives us to the conclusion, that the first act which Adam performed was to take the fruit from the hand of his wife. Or, else his previous actions were all evil—doing no good; but yet not sinful; for the first act of rebellion produced his fall.

Till this can be made to agree with Scripture and reason, we need not fear to call Smith and his coadjutors impostors, and the Book of Mormon a younger brother of the Koran.