“To the Editors of the Times & Seasons:” 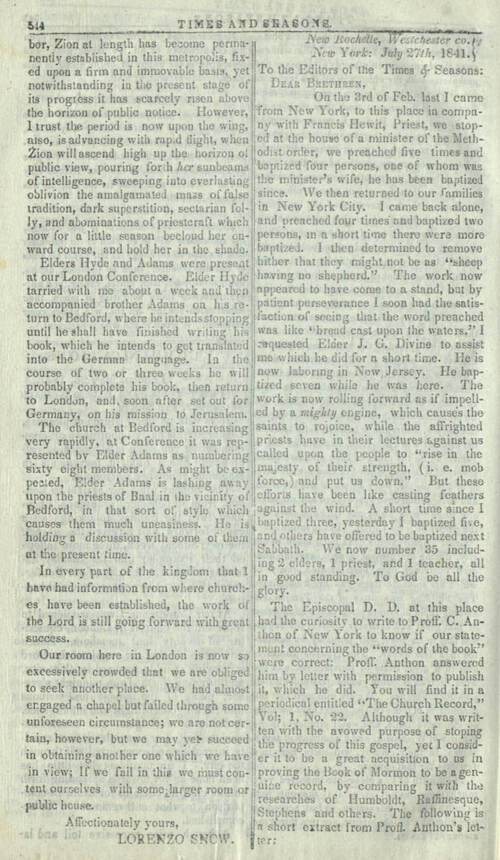 To the Editors of the Times & Seasons:

On the 3rd of Feb. last I came from New York, to this place in company with Francis Hewit, Priest, we stopped at the house of a minister of the Methodist order, we preached five times and baptized four persons, one of whom was the minister’s wife, he has been baptized since. We then returned to our families in New York City. I came back alone, and preached four times and baptized two persons, in a short time there were more baptized. I then determined to remove hither that they might not be as “sheep having no shepherd.” The work now appeared to have come to a stand, but by patient perseverance I soon had the satisfaction of seeing that the word preached was like “bread cast upon the waters.” I requested Elder J. G. Divine to assist me which he did for a short time. He is now laboring in New Jersey. He baptized seven while he was here. The work is now rolling forward as if impelled by a mighty engine, which causes the saints to rejoice, while the affrighted priests have in their lectures against us called upon the people to “rise in the majesty of their strength, (i. e. mob force,) and put us down.” But these efforts have been like casting feathers against the wind. A short time since I baptized three, yesterday I baptized five, and others have offered to be baptized next Sabbath. We now number 35 including 2 elders, 1 priest, and 1 teacher, all in good standing. To God be all the glory.

The Episcopal D. D. at this place had the curiosity to write to Proff. C. Anthon of New York to know if our statement concerning the “words of the book” were correct: Proff. Anthon answered him by letter with permission to publish it, which he did. You will find it in a periodical entitled “The Church Record,” Vol; 1, No. 22. Although it was written with the avowed purpose of stoping the progress of this gospel, yet I consider it to be a great acquisition to us in proving the Book of Mormon to be a genuine record, by comparing it with the researches of Humboldt, Raffinesque, Stephens and others. The following is a short extract from Proff. Anthon’s letter: [544]

“Many years ago, the precise date I do not now recollect, a plain looking countryman called upon me with a letter from Dr. Samuel L. Mitchel, requesting me to examine, and give my opinion upon a certain paper, marked with various characters, which the Doctor confessed he could not decipher, and which the bearer of the note was very anxious to have explained. A very brief examination of the paper convinced me that it was a mere hoax, and a very clumsy one too. The characters were arranged in columns like the Chinese mode of writing, and presented the most singular medley that I ever beheld. Greek, Hebrew, and all sorts of letters, more or less distorted, either through unskilfullness or from actual designs, were intermingled with sundry delineations of half moons, stars, and other natural objects, and the whole ended in a rude representation of the Mexican Zodiac.” I suppose that Proff. Anthon considered that this would be an incontrovertible argument against the Book of Mormon; but let us see: The celebrated antiquarian Proff. Rafinesque says, in speaking of the writing found on the ruins of the stone city found in Mexico, “The glyphs of Otolum are written from top to bottom like the Chinese, or from side to side, indifferntly like the Egyptian and the Demonic Libian.—Although the most common way of writing the groubs is in rows and each groub seperated, yet we find some framed, as it were in oblong squares, or tablets like those of Egypt.” American Antiquities page 127. Also on page 122 of the same work, is a fac simile of American hieroglyphics found in Mexico.—They are arranged in columns, the 1st column consists of four “Delineations of half moons,” the 2nd of three suns, the 3rd of the letter I and the human scabula, the 4th of one R and two O’s, the 5th column consists of 2 hands, the 6th of a triangle and two squares, the 7th of 2 fishes, the 8th of an S and a quill, the 9th consists of the letter N and blaze of fire, &c. &c. * * * *

Yours in the bonds of the new covenant,