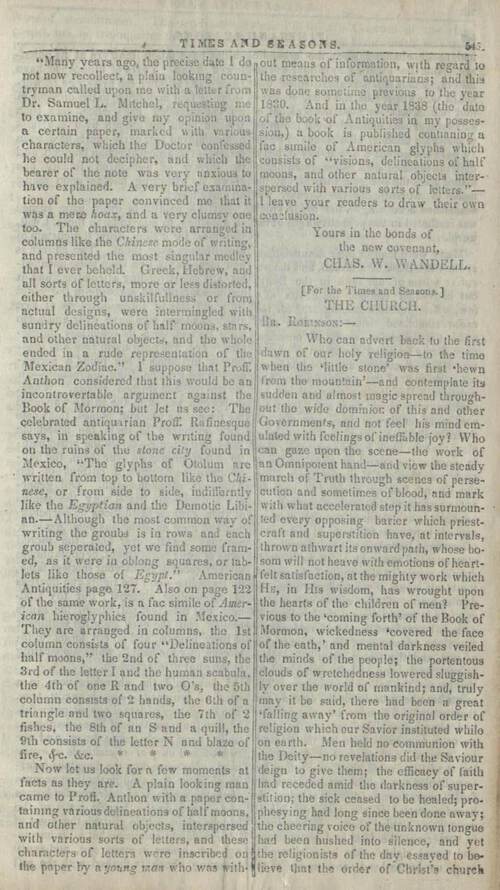 Who can advert back to the first dawn of our holy religion—to the time when the ‘little stone’ was first ‘hewn from the mountain’—and contemplate its sudden and almost magic spread throughout the wide dominion of this and other Governments, and not feel his mind emulated with feelings of ineffable joy? Who can gaze upon the scene—the work of an Omnipotent hand—and view the steady march of Truth through scenes of persecution and sometimes of blood, and mark with what accelerated step it has surmounted every opposing barier which priestcraft and superstition have, at intervals, thrown athwart its onward path, whose bosom will not heave with emotions of heartfelt satisfaction, at the mighty work which HE, in HIS wisdom, has wrought upon the hearts of the children of men? Previous to the ‘coming forth’ of the Book of Mormon, wickedness ‘covered the face of the eath,’ and mental darkness veiled the minds of the people; the portentous clouds of wretchedness lowered sluggishly over the world of mankind; and, truly may it be said, there had been a great ‘falling away’ from the original order of religion which our Savior instituted while on earth. Men held no communion with the Deity—no revelations did the Saviour deign to give them; the efficacy of faith had receded amid the darkness of superstition; the sick ceased to be healed; prophesying had long since been done away; the cheering voice of the unknown tongue had been hushed into silence, and yet the religionists of the day essayed to believe that the order of Christ’s church [545] had never changed since the apostolic age. But the ushering in of that eventful era, when the ‘still small voice’ was heard to ‘whisper from the dust,’ restored that which was lost; the deep gloom of superstition was radiated from the mind of man; the unpenetrable clouds of bigotry were dissipated; a bright sky of heavenly intelligence shed its enlightening radiance upon the benighted world, and the mode of worshipping the Creator was established according to the order which was instituted in the primative ages of the world.

Many were loud in their denunciations against the Book of Mormon, and the peculiar tenets of our faith in the Deity; but conviction reached the hearts of a few, whose uncompromising zeal for the cause stimulated them to action; and, amid the demoniac scoffs of enemies, they firmly breasted the storm of unprecedented persecution, and stood undaunted in defence of the principles they had espoused. Despite the unparalleled opposition with which they met, great accessions, from time to time, were made to their number; and now, that only ten or eleven years have rolled away their fleety months, their numbers have swollen to near one hundred thousand souls. But the Church has not attained to its present standing in the scale of exalted preeminence, by passing through flowery vales of happiness and repose; no! scenes of carnage have beset it on every hand; streamlets of innocent blood have made doleful music in the ears of the saints; the bleak winds of winter have borne the death-groans of the widow and orphan upon their frozen wings; the howling wilderness has echoed back, with melancholy moan, the entreaties of the palsied tongue of age, and the feeble cries of helpless infancy have been awfully mingled with the roar of the bellowing tempest. The saints have been barbarously driven from their peaceful fire-sides into the desolate and cheerless prairies—where there was no voice to console them but the ‘muttering tempest,’ and no tears to sympathise but the falling rain; the Constitution has been denied the right to wave its peaceful folds over them, and a place upon the broad footstool of the Almighty has almost been denied them.

Mobocracy—in America—the land of boasted liberty and equal rights—has been allowed to raise its hydra-head, and many of the saints have fallen martyrs at its unhallowed shrine. Tears of innocence have been made to flow; the privelege of worshipping God according to the dictates of an untrammeled conscience, has been wrested from the church by a heartless and uninjured foe; early hearts have been blasted—reciprocal affection blighted, and the sorrow of unrealized felicity has blown its withering mildew upon many an early heart.

But it is painful to dwell upon scenes so appalling to humanity as these; I will, therefore, for a time, draw the curtain of forgetfulness over them. The church is now measurably free from these uncalled-for and heart-rending atrocities, and it assumes a rank and standing in the world truly enviable to these devotees of vice and wickedness who have ever and anon since its rise, been its relentless detractors. Yes, it is once more free and prosperous: in Illinois it has found a permanent resting place from oppression— an asylum of undisturbed repose. When, in poverty and exile, the saints wandered far from their peaceful homes, this noble State extended to them the hospitable hand of welcome—threw the broad mantle of their protection over them, and hailed them as legitimate citizens of the American commonwealth. Oh! generous and patriotic State! may the genius of your glorious institutions be perpetuated, and may no ambitious demogogue or usurping despot, ever hold the sacred reins of your government, or contaminate the fair escutcheon of your spotless fame, by trampling upon the rights and liberties of unoffending citizens! For thy kindness and manifest patriotism, the saints render you the very greatful sentiment of their bosoms, and do not forget to intercede in your behalf, while supplicating at the altar of intercession.

I have said the church is now in a state of prosperity—this is verily true. The daughters of Israel now sit peacefully upon the mountains of Zion—happiness smiles upon each gentle brow, and the sweet-toned harp of rejoicing is in every hand. No more does the deep-toned clarion of hostile war send its thrilling accents along the precincts of their invaded homes—no more do the terrific yel s of the bacchanalian rabble disturb the quiet of their midnight slumbers; but al is harmony—joy beams in every eye, and every blooming check is flushed with the soft [546] roses of contentment. The everlasting gospel, too, is triumphant; the most glittering palaces of our beloved America have reverberated with its joyful sound—its trembling echoes have reached the most magnificent courts of aristocratic England, and thousands of the noble and ignoble, of both Governments, now worship at its holy shrine. A messenger, bearing the glad tidings of salvation, has been sent to the deserted countries of Palestine, and those silent and gloomy regions—once the theatre of many mighty miracles, wrought by the Omnipotent hand of Jehovah and his apostles— will soon re-echo with its long silent and almost forgotten sound.