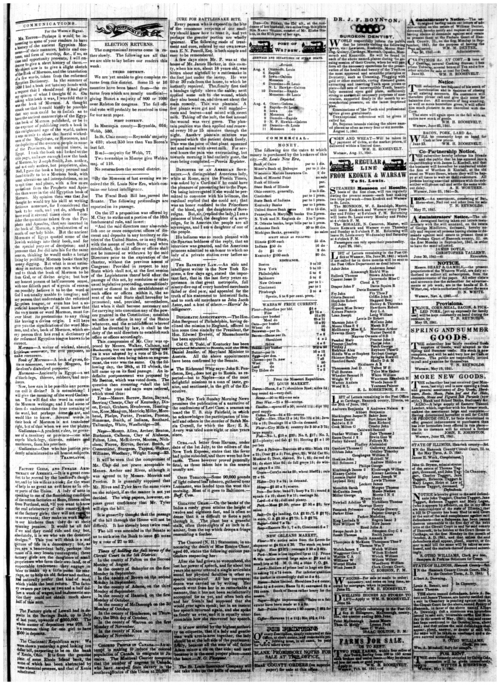 For the Warsaw Signal.

MR. EDITOR—Perhaps it would be interesting to some of your readers to have a history of the ancient Egyptian Mormons—of their manners, habits and customs, and form of worship, &c., if so, as time and opportunity presents, I will endeavor to give a short history of them.--My object now is to give a slight sketch of the Book of Mormon, and the translation of a few words, taken from the reformed Egyptian Dictionary. In the summer of 1830 I had a book put into my hands with a request that I should read it and give my opinion of what I thought of it. On asking what book it was, I was told that it was the book of Mormon. A thought struck me that it could hardly be possible that any man could be so foolish as to have the ancient manuscripts of the Egyptian book of Mormon published, or be to the expense of publishing such a book in this enlightened age of the world, unless it was merely to show the horrid wickedness of the Magicians, or Sorcerers, and the duplicity of the common people in some of the Provinces, in ancient times, in Egypt. I took the book and looked at the title page, and sure enough I saw the book of Mormon, by Joseph Smith, Jun. author, and not only author, but proprietor, also.

Well, I gave the book a hasty perusal and found it truly to be a Mormon book, with some alterations and interpolations, so as to suit time and place, with a few more quotations from the Prophets and Apostles than were in the old Egyptian book of Mormon. My opinion then was that Joe thought he would try his skill at writing fictitious nonsense, for I considered the book to be such, and yet do, although I have read it several times since. I consider the quotations taken from the Prophets and Apostles, that are inserted in the book of Mormon, a proianation of so much of our holy bible. But the ancient Mormons of Egypt quoted some of the Jewish writings into their book, and for the special purpose of deception; and I presume that Joe did into his for the same reason, thinking he would make a better living by peddling Mormon books than by money digging. But what is most astonishing in nature, there are men who pretend to think the book of Mormon to be from God, or of divine origin; but how any honest person of half common sense, with one fiftieth part of grain of reason can possibly believe it to be the word of God I am totally unable to imagine; and any person that understands the reformed Egyptian tongue, or even has but a superficial knowledge of it, must know that the very term or word Mormon, must forever blast its pretentions to any thing like having a divine origin. I will here give you the signification of the word Mormon, and also, book of Mormon, which every person that has read a dictionary of the reformed Egyptian tongue knows to be correct.

Now, how can it be possible any person can call it divine? It is astonishing! I will give the meaning of the word Gadiantan. You will find the word in some of the Mormon writings; and I find some of them do understand the true meaning of the word, but perhaps some do not, and would like to know. Several words in their book of Mormon is not translated right, but of that when we see the plates.

Gadiantan--A prudent ruler, or governor of a territory or province--one who expels black-legs, thieves, robbers and murderers, from his province.

Gadiantan--one who has justice prudently administered to all honest subjects.