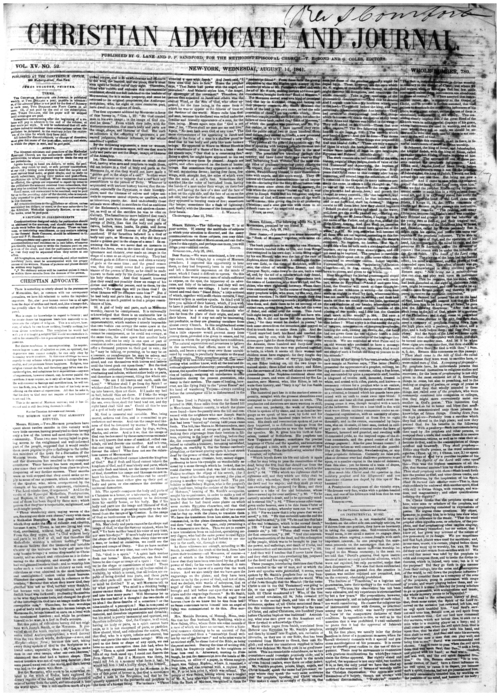 JUSTUS Dear Justus,—I promised you some account of the “Book of Mormon,” together with some extracts.

The book purports to be written by one Mormon, from records handed down to him, and from things that transpired in his own day; a little being added by his son Moroni, who was the last of the race of Nephites, about the year 420. According to the history one Lehi, in the time of Zedekiah, with his sons, the oldest of whom was Laman, and the youngest Nephi, came down to the sea, built a vessel, and, by the aid of a needle which they found, sailed over to America. Their descendants took the names of Lamanites, who were wicked, and Nephites, who were righteous, between whom there were continual wars. In the course of their history many prophets arose, who were, by the way, their greatest warriors. In their travels south they dug up some plates containing records; a prophet translates them, and finds them to be an account of an extinct race, sprung from Jared, who left the tower of Babel, and sailed over the ocean. This Jared built eight barges; and as they could not have windows, (Mr. S. did not know but the ancients had glass,) “for they would be dashed in pieces,” he took some stones from the mountain, and prayed to God to touch them to make them light. And the “Lord stretched forth his hand and touched the stones, one by one, with his finger.” Thus the stones gave light for them during their voyage over the Atlantic, three hundred and forty-four days. After many years this race was gathered together to battle, in which it seems all their women and children must have engaged; for they fought day after day till two million of warriors besides women and [text indecipherable], yet they fought on, one Ether looking on, till the two kings remained alone; these killed each other; and Ether, like the servants of Job, was left alone to record the proceedings. The Nephites continued about one thousand years, and were all destroyed by the Lamanites, save Moroni, who, like Ether, is left to write their history, and “bury it up” for Joe Smith to bring forth.

The historical part has in it the marks of some ingenuity, mingled with the grossest absurdities ever attempted to be palmed upon man as truth. The prophecies and doctrines are more wanting in skill, and were not, probably, the work of Spaulding. Christ is spoken of by name, and in as familiar language as we speak of him now, by Lehi and his sons, more than five hundred years before his advent. His death and resurrection spoken of just as they happened, in as different language from the Old Testament prophecies as was the teaching of the apostles. Mr. S. gives him his birth at Jerusalem, instead of Bethlehem. His prophets use New Testament phrases; sometimes the precise language of Christ and the apostles, and sometimes only changed a little, with a poor attempt at Old Testament style. Take the following, selected from a number, ad infinitum.

“Which layeth down his life and taketh it again—that he may bring to pass the resurrection of the dead, being the first fruit that should rise from the dead,” p. 63. “Even that old serpent, which is the devil,” p. 64. “They which are righteous shall be righteous still, and they which are filthy shall by filthy still; wherefore, they which are filthy are the devil and his angels; and they shall go away into everlasting fire, prepared for them; and their torment is a lake of fire and brimstone, whose flames ascend up for ever and ever,” p. 80. “To be carnally minded is death, and to be spiritually minded is eternal life,” p. 82. “There is none other name given under heaven, save it be this Jesus Christ of which I have spoken, whereby men can be saved,” p. 105.

“For we know that it is by grace that we are saved,” p. 105. “He that endureth unto the end the same shall be saved,” p. 119. “To be cast into that lake of fire and brimstone, which is the second death,” p. 129. “I fear lest I have committed the unpardonable sin,” p. 142. “These shall come forth in the first resurrection,” p. 188. “And also concerning the resurrection of the dead, and the redemption of the people, which was to be brought to pass by the power, and sufferings, and death of Christ, and his resurrection and ascension into heaven,” p. 191. “And then will I confess that I never knew them, and they shall depart into everlasting fire, prepared for the devil and his angels,” p. 214.

These passages, introducing doctrines that Christ first sounded in the ear of man, and at which the Jews and apostles were astonished, it seems, were spoken by Mr. Smith’s prophets four or five hundred years before Christ came into the world. Who of the Jews thought that the Messiah (for the name Christ is not in the Old Testament) was going to die, or rise again? Who ever heard of the new birth till Christ announced it? Who, of the first and second revelation, till St. John revealed it? Where is the second death, and lake of fire and brimstone, spoken of, till Christ mentioned them? On this continent they were baptized in the name of Christ, and called Christians, one hundred years before Christian baptism was instituted! Astonishing, what wise men grew on this American soil! How forward to acknowledge Christ!

Many whole pages from Isaiah, translated from Hebrew into Egyptian by Mr. Smith’s prophets, and then by himself into English, are, verbatim et literatim, as they are in our Bible, that has been translated from Hebrew to Greek, then into English; and where our translators supplied in italics what was deficient Mr. Smith puts in as good translation. This is a remarkable coincidence, as no two translators could translate precisely alike, and is alone sufficient to condemn the work in the minds of even limited readers, were there no other defect.

Mr. Smith’s prophets, priests, kings, angels, and Christ himself, speak the same bad grammar, except where they speak the very same sentences that the prophets, apostles, and Christ uttered. This makes it smack so strongly of Smithism, that none but those of the smallest capacity would by duped by it. These, however, are the ones which Mr. S. wishes, if they only have money, as others might discover his deceptions, and overthrow the whole concern. Take a few specimens of the grammatical construction:—“And this he done—And I sayeth unto him—

My brethren which was in the land—They stood before the king, and was permitted—

They was added to his Church—Those that was taken captive.” The five following are comprehended in six lines, p. 212: “The records which was handed down—And this he done—

Two stones which was fastened—These things was prepared—And was handed down.” these are only a sample of those in which the book abounds; and yet the writers were learned at least in two languages, Egyptian and Hebrew. Mirable dictu!

The work consists of a bad imitation of the wars, history, reign of kings, judges, deeds of valor of the Old Testament and Apocrypha, the baptism of John, preaching of Christ and his disciples. It appears that Christ came to this country after his resurrection, and uttered here the substance of what is contained in the Gospels; in many instances precisely the same, in others a little changed: as, “Go ye into all the world, (spoken to the twelve disciples whom he had chosen here,) and preach the Gospel to every creature. He that believeth, and is baptized, shall be saved; he that believeth not, and is not baptized, shall be damned.” He was careful to tell them here how they should baptize: “Behold ye shall go own and stand in the water, and these are the words ye shall say,—Having authority given of me of Jesus Christ, I baptize you in the name of the Father, and of the Son, and of the Holy Ghost, Amen. And then shall ye immerse them in the water, and come forth again out of the water,” p. 478. So you see what will become of all those who are not baptized, according to this formula, which Christ forgot to teach on the eastern continent. No baptism, no heaven. But Mr. S. forgot this when he took such a stand against infant baptism, saying they were already pure, and did not need to be baptized. The prophet is careful to make his bible speak out in plain terms all his doctrines, and to overthrow others. Infant baptism, Universalism, priestcraft, “popularity,” Christian Churches—all, in fine, except Mormonism, are hewn to pieces, and given to the winds.

Hear his apology for his bad grammar and stupid nonsense, spoken by Moroni, who, you will recollect, wrote in Egyptian:—“And I said unto him, Lord, the Gentiles will mock at these things, because of our weakness in writing—for thou hast made us mighty in word by faith, whereunto thou hast not made us mighty in writing; and thou hast made us that we could write but little, because of the awkwardness of our hands; wherefore, when we write, we behold, and stumble because of the placing of our words; and I fear lest the Gentiles shall mock at our words,” p. 564. Did ever a writer of divine revelation make such an apology as that before? What a pity it is that among the gifts of tongues, interpretation of tongues, prophecies, healing the sick, casting out devils, &c., the Lord had not given them the use of their hands a little better, and a decent knowledge of the language they wrote in. We are reminded of what Paine said to an old woman who professed to have a message from God to him, “Tut, tut, nonsense, God would not employ such a foolish old thing as you are to do his errands.”

[scan is indecipherable] new temple at Nauvoo says, “The latter (Smith) presented the appearance of a prophet, militant, being dressed in military costume, riding a fine horse, and surrounded by quite a respectable staff, besides a lifeguard of twelve men, mounted, dressed in white, and armed with rifles, pistols, and knives—a necessary retinue for a prophet who is an outlaw, having been demanded by the governor of Missouri as a criminal, a demand which his guards have promised with an oath to resist even unto blood. I could see and hear all that passed—and a most imposing scene it was, though mingled with a touch of the ludicrous. Here on a lone bluff in the wild west were fifteen military companies under an ecclesiastical organization, with an assembly of spectators variously estimated at from five to eight thousand; and in the centre, surrounded by bayonets, was an ill-made, ill-bred man, decked in military garb—an indicted criminal under the laws of Missouri, honored and guarded, and swelling with ill-concealed pride, as the inspired organ of the divine commands, and the grand centre of all this strange pageant! Alas for poor human nature! I had never before so well conceived of the possibility of the Mohammedan, Swedenborgian, or any other prophetic delusion. Certainly no false prophet or dreamer ever had shallower pretences to go upon, or a smaller capital in the trade of delusion, than this man; yet he boasts of a train of dupes, amounting to between 50,000 and 100,000.”

How much like Christ and the apostles is this military prophet and his lifeguard! and yet American citizens are duped by this ape of Mohammed!!!

A Presbyterian clergyman of the vicinity says, “He dresses very fine, walks with a golden-headed cane, and one of his followers told him that he was worth $100,000.”