Reply to the Preston Chronicle 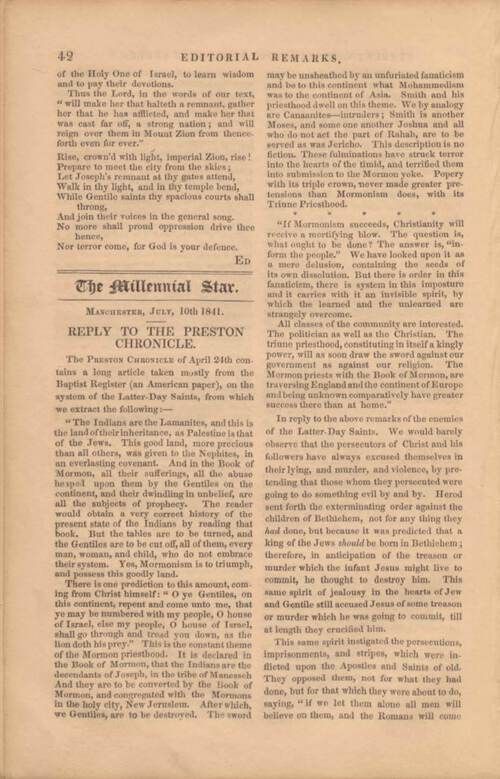 REPLY TO THE PRESTON CHRONICLE.

The PRESTON CHRONICLE of April 24th contains a long article taken mostly from the Baptist Register (an American paper), on the system of the Latter-Day Saints, from which we extract the following:—

“The Indians are the Lamanites, and this is the land of their inheritance, as Palestine is that of the Jews. This good land, more precious than all others, was given to the Nephites, in an everlasting covenant. And in the Book of Mormon, all their sufferings, all the abuse heaped upon them by the Gentiles on the continent, and their dwindling in unbelief, are all the subjects of prophecy. The reader would obtain a very correct history of the present state of the Indians by reading that book. But the tables are to be turned, and the Gentiles are to be cut off, all of them, every man, woman, and child, who do not embrace their system. Yes, Mormonism is to triumph, and possess this goodly land.

There is one prediction to this amount, coming from Christ himself: “O ye Gentiles, on this continent, repent and come unto me, that ye may be numbered with my people, O house of Israel, else my people, O house of Israel, shall go through and tread you down, as the lion doth his prey.” This is the constant theme of the Mormon priesthood. It is declared in the Book of Mormon, that the Indians are the decendants of Joseph, in the tribe of Manesseh. And they are to be converted by the Book of Mormon, and congregated with the Mormons in the holy city, New Jeruslem. After which, we Gentiles, are to be destroyed. The sword may be unsheathed by an unfuriated fanaticism and be to this continent what Mohammedism was to the continent of Asia.

Smith and his priesthood dwell on this theme. We by analogy are Canaanites—intruders; Smith is another Moses, and some one another Joshua and all who do not act the part of Rahab, are to be served as was Jericho. This description is no fiction. These fulminations have struck terror into the hearts of the timid, and terrified them into submission to the Mormon yoke. Popery with its triple crown, never made greater pretensions than Mormonism does, with its Triune Priesthood.

“If Mormonism succeeds, Christianity will receive a mortifying blow. The question is, what ought to be done? The answer is, “inform the people.” We have looked upon it as a mere delusion, containing the seeds of its own dissolution. But there is order in this fanaticism, there is system in this imposture and it carries with it an invisible spirit, by which the learned and the unlearned are strangely overcome.

All classes of the community are interested. The politician as well as the Christian. The triune priesthood, constituting in itself a kingly power, will as soon draw the sword against our government as against our religion. The Mormon priests with the Book of Mormon, are traversing England and the continent of Europe and being unknown comparatively have greater success there than at home.”

In reply to the above remarks of the enemies of the Latter-Day Saints. We would barely observe that the persecutors of Christ and his followers have always excused themselves in their lying, and murder, and violence, by pretending that those whom they persecuted were going to do something evil by and by. Herod sent forth the exterminating order against the children of Bethlehem, not for any thing they had done, but because it was predicted that a king of the Jews should be born in Bethlehem; therefore, in anticipation of the treason or murder which the infant Jesus might live to commit, he thought to destroy him. This same spirit of jealousy in the hearts of Jew and Gentile still accused Jesus of some treason or murder which he was going to commit, till at length they crucified him.

This same spirit instigated the persecutions, imprisonments, and stripes, which were inflicted upon the Apostles and Saints of old. They opposed them, not for what they had done, but for that which they were about to do, saying, “if we let them alone all men will believe on them, and the Romans will come [42] and take away our place and nation;” “these men teach contrary to the decrees of Cæsar, saying there is another King, one Jesus.”

The enemies of truth in these days have only to change these sentences enough to apply them to the Latter-Day Saints, and their complaints amount to the same: for instance, “if we (the editors of thr Baptist Register and the Preston Chronicle) let the Saints thus alone all men will believe on them, and they (the Mormons) will come and take away our place and nation.” “These Saints teach contrary to the creeds of the Baptists and other sectarians, saying there is another king, one Jesus.” They seem desperately afraid, too, that this Jesus will avenge the wrongs of the poor oppressed Israelites, and take vengeance upon the Gentiles for their injustice and oppression. The writer seems conscious that the testimony of the Book of Mormon, in regard to the Gentiles, having wronged and oppressed the Indians is correct. He pleads guilty, on the part of the Gentiles, and observes that Christ himself has promised to execute justice in this matter, except they (the Gentiles) repent, and come to Christ, and be numbered with Israel. Now, I would ask the Baptist Register and Preston Chronicle what objection they have to this repenting, seeing they themselves acknowledge that the Book of Mormon contains a true and correct testimony of wrongs, sufferings, and abuse heaped upon that remnant by the Gentiles? (Christians.)

If the Gentiles have actually been guilty of that which these editors acknowledge, and king Jesus is a just king, has he not a right to call them to repentance, and to threaten them with just retribution if they do not repent?

But, says the Register, “Mormonism is to triumph, and possess this goodly land?” “it carries with it an invisible spirit, by which the learned and unlearned are overcome.” He must have read Daniel, 7th chap, where it is predicted that the saints of the Most High will possess the kingdom and the greatness of the kingdom under the whole heaven. Messrs. Editors, you inquire what can be done; to which I reply, in the words of Mormon, “Do not think that you can turn the right hand of the Lord unto the left, that he may not execute judgment unto the fulfiling of the covenant which he hath made unto the house of Israel.”

It is not our intention to undertake a contradiction of all the falsehoods and misrepresentations which appear in the Chronicle and other prints; but we wish it distinctly understood that the interpretation given to the Mormon predictions as to the Latter-Day Saints drawing the sword against others who may differ from them in religious belief is without shadow of truth, being contrary to the whole spirit of the Christian religion, which they (the Saints) profess; and however the Lord may see fit to make use of the Indians to execute his vengeance upon the ungodly, before they (the Indians) are converted by the record of their forefathers, yet it is certain that if they once became Latter-Day Saints they will never more use weapons of war except in defence of their lives and liberties. The Latter-Day Saints never did draw the sword except in defence of their lives, and of the institutions and laws of their country, and they never will. But this much the Latter-day saints have openly and boldly avowed before God, Angels and Men, viz. That if there ever comes another exterminating order such as was executed in the state of Missouri by order of Governor Boggs, that they will maintain the laws and institutions of American liberty, and defend their rights to the utmost of their power; if it were to blow fifty such governors as Boggs into attoms and their armies too.

The laws and institutions of American liberty have been completely distroyed in the state of Missouri, and a gang of outlaws, murderers, and robbers have been rulers for three years. But such abominations shall come to an end and that right soon.

The holy principles of freedom established by the hand of God, through the instrumentality of Washington, and the fathers of our country, shall be maintained, and shall regain their ascendancy in Missouri, and the strong military powers of the Latter-Day Saints and all true Americans shall help to perform it.

Now, if the Baptist Register can call the Missouri murderers “citizens,” and thus partake of their evil deeds, let him do so; but the true republican can never recognise them as anything but a gang of outlaws. [43]