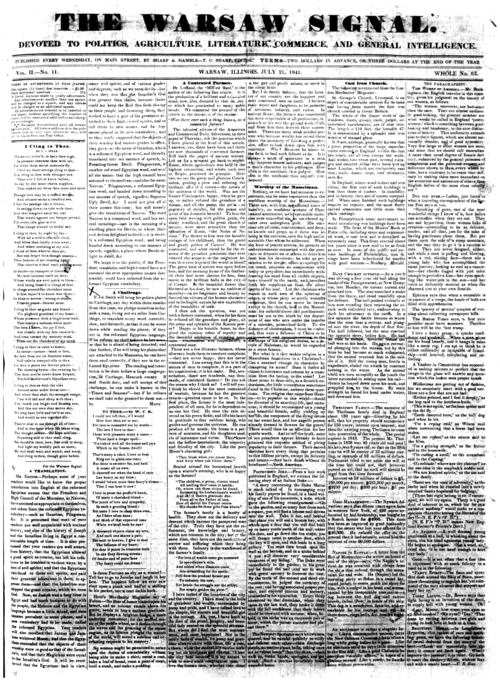 For the Warsaw Signal.

MR. EDITOR.—Perhaps some of your readers would like to know the proper translation into English of the reformed Egyptian names that the President and High Council of the Mormons, at Nauvoo, have assumed as appropriate to themselves, and taken from the reformed Egyptian vocabulary—such as Gazelom, Pilagoram, &c. It is presumed that most of your readers are well acquainted with the ancient history and also the history of Joseph and the Israelites living in Egypt a considerable length of time. It is also presumed that your readers are well aware, from history, that the Egyptians allowed a good spirit as creator, but left his creatures to be troubled in various ways, by a host of evil spirits; and that the Egyptians sacrificed to these evil spirits, and paid their greatest adorations to them, to appease them—and that the Israelites worshipped the great creator, which we term God. Now, as Joseph was a long time in Egypt and had much business to do with the people, the Hebrew and the Egyptian language became a little mixed, and soon became prevalent in some places, and a new vocabulary had to be made, called the reformed Egyptian. Your readers will also recollect that Jannas and Jambres withstood Moses; and that the Egyptians contended that the objects of their worship were as good as that of the Israelite’s; and that their Magicians were equal to the Israelite's God. It will be recollected that the Egyptians had in view, many evil spirits, and of various grades and degrees, such as we term devils—but when they saw that the Israelites' God was greater than theirs, because theirs could not keep the Red Sea from closing on their people and drowning them, they wished to have a part of his greatness attached to their Idols or evil spirits, and so call them by new names, and [have the] names placed in the new vocabulary; and as they really supposed that the objects of their worship had various grades in office, they gave one the name of Gazelom, which is a reformed Egyptian word, and literally translated into our manner of speech, is, Presiding Great Devil. Pilagoneram, is another reformed Egyptian word, and so of all the names that the high council have assumed to themselves—and also the name Nauvoo. Pilagoneram, a reformed Egyptian word, and handed down according to our manner of speech, signifies, Superior Ugly Devil, &c. I need not give all of their names this time; but will merely give the translation of Nauvoo. The word Nauvoo is a compound word, and has several meanings—one is the meaning of a dwelling place for Devils, or where their evil deities delighted to dwell—it is strictly a reformed Egyptian word; and being handed down according to our manner of speech, signifies, a place where Devils delight to dwell, &c.

We leave it to the public, if the President, translator, and high council have not assumed the most appropriate names they possibly could have selected from the reformed Egyptian vocabulary.