Dialogue on Mormonism. No II 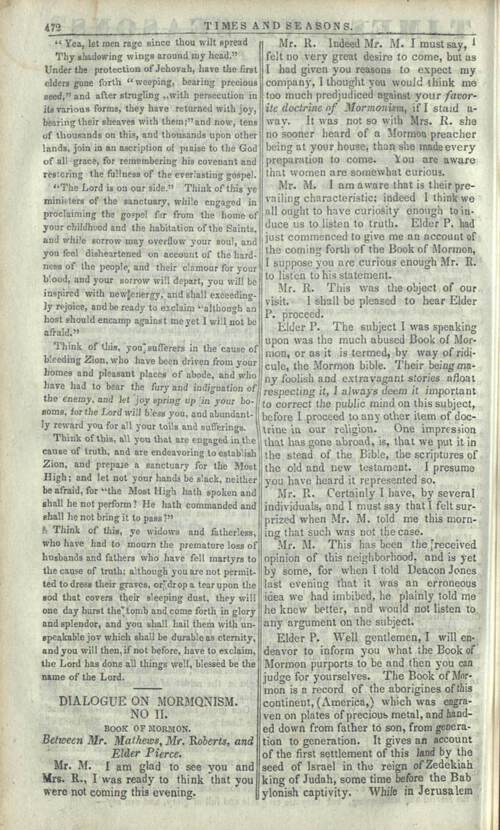 Between Mr. Mathews, Mr. Roberts, and

Mr. M. I am glad to see you and Mrs. R., I was ready to think that you were not coming this evening.

Mr. R. Indeed Mr. M. I must say, I felt no very great desire to come, but as I had given you reasons to expect my company, I thought you would think me too much prejudiced against your favorite doctrine of Mormonism, if I staid away. It was not so with Mrs. R. she no sooner heard of a Mormon preacher being at your house, than she made every preparation to come. You are aware that women are somewhat curious.

Mr. M. I am aware that is their prevailing characteristic; indeed I think we all ought to have curiosity enough to induce us to listen to truth. Elder P. had just commenced to give me an account of the coming forth of the Book of Mormon, I suppose you are curious enough Mr. R. to listen to his statement.

Mr. R. This was the object of our visit. I shall be pleased to hear Elder P. proceed.

Elder P. The subject I was speaking upon was the much abused Book of Mormon, or as it is termed, by way of ridicule, the Mormon bible. Their being many foolish and extravagant stories afloat respecting it, I always deem it important to correct the public mind on this subject, before I proceed to any other item of doctrine in our religion. One impression that has gone abroad, is, that we put it in the stead of the Bible, the scriptures of the old and new testament. I presume you have heard it represented so.

Mr. R. Certainly I have, by several individuals, and I must say that I felt surprized when Mr. M. told me this morning that such was not the case.

Mr. M. This has been the received opinion of this neighborhood, and is yet by some, for when I told Deacon Jones last evening that it was an erroneous idea that we had imbibed, he plainly told me he knew better, and would not listen to any argument on the subject.

Elder P. Well gentlemen, I will endeavor to inform you what the Book of Mormon purports to be and then you can judge for yourselves. The Book of Mormon is a record of the aborigines of this continent, (America,) which was engraven on plates of precious metal, and handed down from father to son, from generation to generation. It gives an account of the first settlement of this land by the seed of Israel in the reign of Zedekiah king of Judah, some time before the Babylonish captivity. While in Jerusalem [472] during the decline of the Jewish polity, the Lord appeared to a man of the name of Lehi, and commanded him to take his family and journey into the wilderness, and also informed him of the destructions which should come upon the Jewish nation. Lehi obedient to the heavenly command, took his household and journeyed in the wilderness for some considerable time, subject to hunger and many privations, till at length they came to the borders of the sea, where they were instructed to build them a ship, and launch forth upon the mighty ocean. Having got every thing prepared, they did so, and were carried forward upon the waters for a long time, until, at length they arrived on this western continent: and after returning thanks to the Almighty for his protection and great deliverance, they engaged in cultivating the soil, and were prospered exceedingly upon the land and became very numerous indeed.

Mr. M. You will observe by this account Mr. R. that this people who landed here were Jews, this you know agrees with the idea, which many learned men have had, that the Indians are descendants of the Jews.

Mr. R. I am aware that this idea is generally entertained among the learned.

Elder. P. I shall be pleased for you to make any remarks or ask any questions on any subject as I go along.

After their settlement here, part of the family being righteous, and part wicked and rebellious, they had considerable difficulty and strife, until at length the Lamanites, the wicked portion of the family, were smitten with a skin of blackness and became an idle and filthy people.

It also gives an account of their wars—the reign of their Kings and Judges—the prophesies of righteous and holy men who were among them, several of which have been fulfilled since the records have been found—their skill in architecture—their faith and knowledge of the truths of the gospel—the rending of the rocks on this land at the crucifixion of Jesus—and then gives a very interesting account of our Savior’s appearing to the people on this continent after his resurrection at Jerusalem, agreeable to the saying of his, “I have other sheep which are not of this fold, them also, must I bring in”—his teachings to the people—his choosing apostles and establishing his kingdom after the same pattern he did on the old continent.

Mr. R. This is certainly new to me, but there is one very serious objection in the way, which I must have removed before I can believe the Book; and that is, if Christ established his church and kingdom on this continent how happens it that the Indians have no tradition of the fact, and are altogether unacquainted with the gospel?

Elder P. It is a question, which naturally arises; and I think I shall, before I get through, be able to satisfy you why it is so. After Christ had established his church and sent forth his servants to proclaim the gospel, great success attended their labors, and the greater part of the people became obedient to the faith; true and undefiled religion flourished, and every blessing followed in its train. However, after sometime had elapsed, their began to be schisms in the church; predjudice and its attendant train of evils crept into their midst, until, finally, they began to fight one against the other—the Lamanites against the Nephites, until the Nephites were utterly destroyed from off of the face of the land—the last man remaining was Moroni, in whose possession were sacred records which had been handed down to him, and which he was commanded to hide up unto the Lord, in consequence of the wickedness of the Lamanites. who had not only derided the name of Christ, but sought the lives of all such as proffessed christianity. Consequently they were given up to a wicked and rebellious heart, and became willing instruments in the hands of Satan, and continued to wander in darkness, ignorance and superstition, until the present time, the degenerate and fallen sons of noble and worthy sires.

Mr. M. I have always thought that there had been a more enlightened people on this continent, than the present Indians. The remains of ancient buildings, monuments &c., are evident proofs on this point.

Mr. R. There can be no doubt on this subject. In the recent researches in Central America, the ruins of very large and splendid buildings have been found, but it does not necessarily follow that the Book of Mormon is true.

Elder P. By no means, but you will undoubtedly admit that it is circumstan-[473]cial evidence in its favor. Another thing I would observe is, that there is no correct account given of their descent, or their history—the world has been shrouded in darkness on these matters; but the Book of Mormon like the rising sun, eradiates the gloom, throws a flood of light on the history and proceedings of this people, and brings to light things which have been hid from generation to generation—contains many predictions respecting their restoration to righteousness, and again becoming a ‘fair and delightsome people.’ I cannot better express my ideas on this point than in the language of the hymn, which has been composed by one of our preachers, and which we sung a short time before you came. I will endeavor to repeat it.

Elder P. You and Mrs. M. will assist me then.

Who are ye? why you roam?

And how you get your living?

Have you no God;—no home?

With stature straight and portly,

And decked in native pride,

With feathers, paints, and broaches,

“I once was pleasant Ephraim,

When Jacob for me pray’d;

But oh! how blessings vanish,

When man from God has stray’d!

Before your nation knew us,

Some thousand moons ago,

Our fathers fell in darkness,

And wander'd to and fro.

And long they’ve lived by hunting,

Instead of work and arts,

And so our race has dwindled To idle Indian hearts.

Yet hope within us lingers,

As if the Spirit spoke:—

He’ll come for your redemption,

And break your Gentile yoke:

And all your captive brothers,

From every clime shall come,

And quit their savage customs,

To live with God at home.

Then joy will fill our bosoms,

And blessings crown our days,

To live in pure religion,

And sing our Maker’s praise.”