Present Condition and Prospects of the American Indians 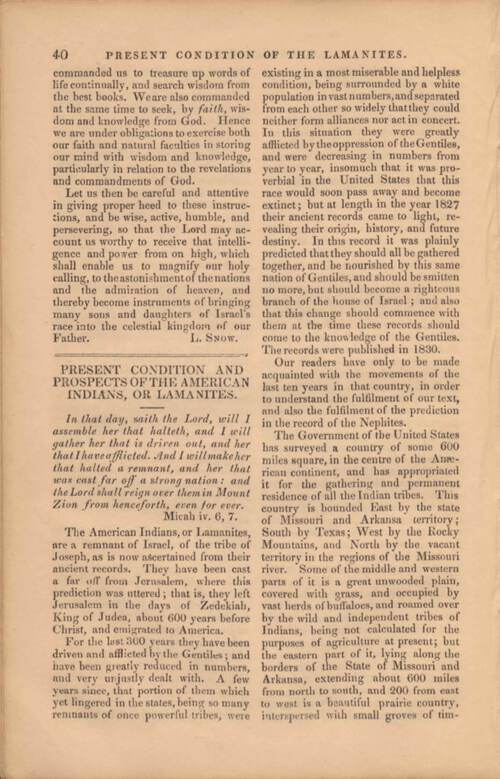 PRESENT CONDITION AND PROSPECTS OF THE AMERICAN INDIANS, OR LAMANITES.

The American Indians, or Lamanites, are a remnant of Israel, of the tribe of Joseph, as is now ascertained from their ancient records. They have been cast a far off from Jerusalem, where this prediction was uttered; that is, they left Jerusalem in the days of Zedekiah, King of Judea, about 600 years before Christ, and emigrated to America.

For the last 300 years they have been driven and afflicted by the Gentiles; and have been greatly reduced in numbers, and very unjustly dealt with. A few years since, that portion of them which yet lingered in the states, being so many remnants of once powerful tribes, were existing in a most miserable and helpless condition, being surrounded by a white population in vast numbers, and separated from each other so widely that they could neither form alliances nor act in concert. In this situation they were greatly afflicted by the oppression of the Gentiles, and were decreasing in numbers from year to year, insomuch that it was proverbial in the United States that this race would soon pass away and become extinct; but at length in the year 1827 their ancient records came to light, revealing their origin, history, and future destiny. In this record it was plainly predicted that they should all be gathered together, and be nourished by this same nation of Gentiles, and should be smitten no more, but should become a righteous branch of the house of Israel; and also that this change should commence with them at the time these records should come to the knowledge of the Gentiles. The records were published in 1830.

Our readers have only to be made acquainted with the movements of the last ten years in that country, in order to understand the fulfilment of our text, and also the fulfilment of the prediction in the record of the Nephites.

The Government of the United States has surveyed a country of some 600 miles square, in the centre of the American continent, and has appropriated it for the gathering and permanent residence of all the Indian tribes. This country is bounded East by the state of Missouri and Arkansa territory; South by Texas; West by the Rocky Mountains, and North by the vacant territory in the regions of the Missouri river. Some of the middle and western parts of it is a great unwooded plain, covered with grass, and occupied by vast herds of buffaloes, and roamed over by the wild and independent tribes of Indians, being not calculated for the purposes of agriculture at present; but the eastern part of it, lying along the borders of the State of Missouri and Arkansa, extending about 600 miles from north to south, and 200 from east to west is a beautiful prairie country, interspersed with small groves of tim- [40] ber, and is well calculated for a dense population. This portion has been surveyed, and divided off to the several tribes, as so many shires, or counties of one government. To this location the government of the States have gathered nearly all the Indian tribes within their jurisdiction. This gathering has been accomplished during the last ten years, that is, since the ancient records were published in English, with the predictions above alluded to contained in them.

This gathering, or transplanting, has been accomplished in the following manner,—first, by treaty between the United States and the several tribes, in which their lands were ceded to the general government in exchange for lands in this new settling. Some millions of dollars are paid to each tribe for the difference in present value between the old and new location, which difference arises out of their former possessions being located in the midst of an improved and settled country. This sum is paid them in clothing, cattle, horses, tools, farming utensils, salt, steel, iron, &c., besides a large sum of money, which is paid them annually, in some cases for twenty years after their removal. Having entered into these arrangements, the tribes were removed at the expence of the United States, by means of waggons, horses, steam-boats, canals, railroads, &c. On their arrival, each man is furnished with good fire-arms, and each tribe with one year’s provision, such as beef, pork, flour, Indian corn, &c., and mills for grinding, sawing timber, &c. are erected for them.

Thus the tribes are brought together as it were in the arms and upon the shoulders of the Gentiles, who have become as nursing fathers and nursing mothers to them; and thus they are planted in their new homes in the neighbourhood of each other, where their several tribes can amalgamate and assimilate into one great and powerful nation, as an integral part of the United States.

This new location is guaranteed to them for ever, and strict rules are established which effectually prevent the Gentile emigrants from settling within their territory. Their wild and hunting habits are now exchanged for agriculture and arts, and they are fast becoming an industrious, intelligent, and prosperous people.

Their attention has already been called to their ancient records. Some of them have become Latter-Day Saints; it remains for them to be brought to the knowledge of their forefathers as a people, and to know their origin as Israelites, and to receive the fulness of the Gospel, as written in their own records, and obey it.

The power and spirit of God will then rest upon them, and they will constitute a standard, or rallyng point, for all the other tribes which are scattered in the vast regions of Canada on the north, Origon on the West, Mexico on the south, together with all the tribes in central and South America. These all must come into the covenant, and be gathered and consolidated in one great national compact, under the nursing care of the Gentiles,—that highly favoured government, the United States, or that portion of it which by cleaving to the righteous and holy principles of liberty, justice, mercy, and truth, will be preserved from that overthrow which awaits the wicked.

These tribes now consist of more than ten millions of souls, and are scattered over a country of more than seven thousand miles long, and two thousand broad, extending from the frozen and scarcely explored regions of Hudson’s Bay on the north, to the extremity of Cape Horn, or the southern end of South America, and from the Atlantic to the Pacific, east and west While these movements are proceeding with such rapidity in regard to the tribes of the Lamanites, the great valley of the Mississippi is beginning to be an asylum for the oppressed, and is rapidly filling up by emigrants from all nations. The Saints from all parts of America and from many parts of Europe are pouring in emigrants like a flood, and the extensive fertility and resources of that valley are sufficient to sustain a population equal to all Europe. Already the nations begin to look to the valley of the Mississippi as the future capital of the world, and destined at no distant period to wield the destiny of the nations. The Saints have already founded several towns, viz—New Jerusalem, or Zion, in Jackson Co., state of Missouri, near the bank of Missouri river. They have also four towns on the bank of the Mississippi, in Illinois, and Iowa, and several others inland. These towns have a direct communication with the ocean by river steam-boat navigation, are well adapted for commerce and manufactures, and are surrounded with the richest and most fertile farming country on the globe.

New Jerusalem, or Zion, is destined for the capital of the settlements of the Saints, where will stand the great temple, the house of the Lord, to which the nations will resort, “to walk in his paths, and be taught in his ways,” thus fulfilling the fourth chapter of Micah. On the west of this city and temple will be the tribes of the remnant of Israel, as they are now being located, as described in the foregoing; and on the east of this city and temple will be the nations of the Gentiles, with their towns and villages, gardens and fields, extending for hundreds of miles, while both the remnant of Joseph from the west, and the Gentiles from the east, resort to the house of God, the Zion [41] of the Holy One of Israel, to learn wisdom and to pay their devotions.

Thus the Lord, in the words of our text, “will make her that halteth a remnant, gather her that he has afflicted, and make her that was cast far off, a strong nation; and will reign over them in Mount Zion from thenceforth even for ever.”

Prepare to meet the city from the skies;

Walk in thy light, and in thy temple bend,

While Gentile saints thy spacious courts shall throng,

And join their voices in the general song.

Nor terror come, for God is your defence.