Mormonism (from the Scotsman) 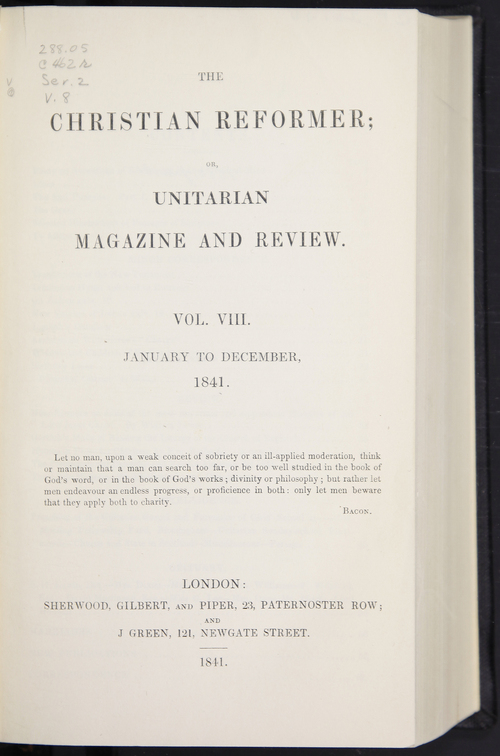 Mormonism (from the Scotsman). —

Many of our readers will be aware that a set of impostors, calling themselves Mormonites, have for several months back been busy in disseminating their tenets in Edinburgh, and attempting to entice the ignorant and unwary to join their ranks. The sect had its origin some years ago in America, from whence a few adventurers have lately come, in order to circulate their opinions in this country. One of these pretends to be an apostle, and declares that he has had intercourse with angels. They also assert that by a particular revelation they became possessed of a book called the Book of Mormon, of equal authority with the Bible, and that they have the power of working miracles, and of speaking in unknown tongues, &c. The absurdity of these pretensions should have rendered them harmless; but we understand that they have already entrapped a considerable number of individuals. The book called the Book of Mormon was, we understand, written by the late Rev. Solomon Spaulding, a retired clergyman, who resided in New Salem, America. It is, in fact, nothing more than a religious romance, in the style and phraseology of Scripture. On removing afterwards to Pittsburgh, the author shewed his MS. to a Mr. Paterson, an editor of a newspaper in that place, who offered to print it, but Mr. Spaulding refused to allow him. Mr. Paterson, however, had a person in his employment named Sidney Rigdon, who had an opportunity to copy the MS., and became the leader of a sect who adopted the book as a part of the sacred Scriptures. When the nostrums of this sect were promulgated in New Salem, where the author had lived, and where his work was well known, the fraud was exposed by the brother of the deceased, whose widow also signed a declaration stating these facts, which was published in the newspapers, and a copy of which we have seen. The adventurers we have now alluded to imagined, no doubt, that their distance from the scene of the original imposture would screen them from detection; but we hope the facts here stated will serve to put individuals on their guard.— (From the Scottish Pilot.)—On Tuesday evening, a Mr. J. B. Rollo, who was till lately an elder among this deluded sect, exposed the folly and imposition of the Mormonite system, before a large audience in Whitfield chapel. He described it as altogether a money-making speculation by Pratt, who came over here from America as apostle of the new faith. It seems, Mr. Pratt has decamped with more money and a great deal more good clothes than when he made his appearance here. He purchased largely from Sutherland, the tailor in Broughton (whose flight we recently related), and promised payment when they should both reach Mount Zion on the Mississippi. From Mr. Rollo’s exposure, it would appear the infant sect has had little peace from the pertinacity with which one case of delinquency after another on the part of this American swindler has been discussed at their meetings. The speaker did not explain how he had ever been led to give his adhesion to the ridiculous hoax he so wittily exposed. It is surprising that there are still many who cling to it as if nothing had occurred to damage the character of their leaders; but its adherents are the most doltish and illiterate of the community.