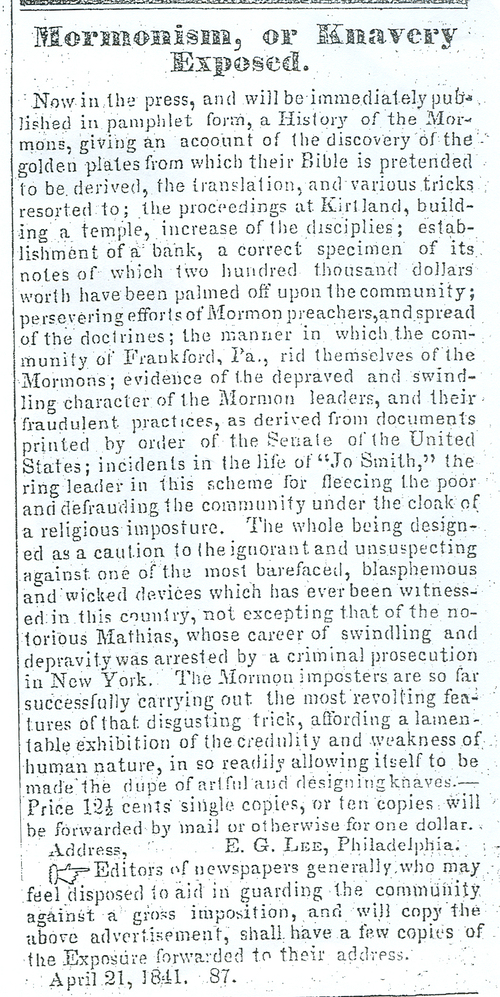 Now in the press, and will be immediately published in pamphlet form, a History of the Mormons, giving an acoount of the discovery of the golden plates from which their Bible is pretended to be derived, the translation, and various tricks resorted to; the proceedings at Kirtland, building a temple, increase of the disciplies; establishment of a bank, a correct specimen of its notes of which two hundred thousand dollars worth have been palmed off upon the community; persevering efforts of Mormon preachers, and spread of the doctrines; the manner in which the community of Frankford, Pa., rid themselves of the Mormons; evidence of the depraved and swindling character of the Mormon leaders, and their fraudulent practices, as derived from documents printed by order of the Senate of the United States; incidents in the life “Jo Smith,” the ring leader in this scheme for fleecing the poor and defrauding the community under the cloak of a religious imposture. The whole being designed as a caution to the ignorant and unsuspecting against one of the most barefaced, blasphemous and wicked devices which has ever been witnessed in this country, not excepting that of the notorious Mathias, whose career of swindling and depravity was arrested by a criminal prosecution in New York. The Mormon imposters are so far successfully carrying out the most revolting features of that disgusting trick, affording a lamentable exhibition of the credulity and weakness of human nature, in so readily allowing itself to be made the dupe of artful and designing knaves.—Price 121/2 cents single copies, or ten copies will be forwarded by mail or otherwise for one dollar.

☞ Editors of newspapers generally who may feel disposed to aid in guarding the community against a gross imposition, and will copy the above advertisement, shall have a few copies of the Exposure forwarded to their address.