To the Editor of the Star 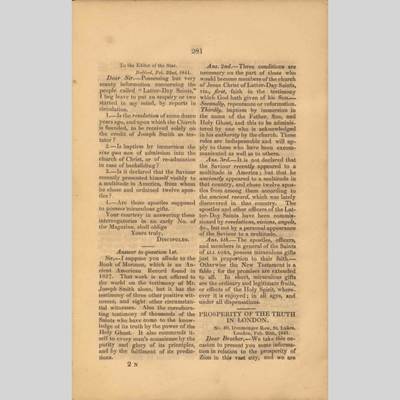 To the Editor of the Star.

Dear Sir.—Possessing but very scanty information concerning the people called “Latter-Day Saints,” I beg leave to put an enquiry or two started in my mind, by reports in circulation.

1.—Is the revelation of some dozen years ago, and upon which the Church is founded, to be received solely on the credit of Joseph Smith as testator?

2.—Is baptism by immersion the sine qua non of admission into the church of Christ, or of re-admission in case of backsliding?

3.—Is it declared that the Saviour recently presented himself visibly to a multitude in America, from whom he chose and ordained twelve apostles?

4.—Are those apostles supposed to possess miraculous gifts.

Your courtesy in answering these interrogatories in an early No. of the Magazine, shall oblige Yours truly, DISCIPULUS.

Sir,—I suppose you allude to the Book of Mormon, which is an Ancient American Record found in 1827. That work is not offered to the world on the testimony of Mr. Joseph Smith alone, but it has the testimony of three other positive witnesses, and eight other circumstantial witnesses. Also the corroborating testimony of thousands of the Saints who have come to the knowledge of its truth by the power of the Holy Ghost. It also commends itself to every man’s conscience by the purity and glory of its principles, and by the fulfilment of its predictions.

Ans. 2 nd.—Three conditions are necessary on the part of those who would become members of the church of Jesus Christ of Latter-Day Saints, viz., first, faith in the testimony which God hath given of his Son.— Secondly, repentance or reformation. Thirdly, baptism by immersion in the name of the Father, Son, and Holy Ghost, and this to be administered by one who is acknowledged in his authority by the church. These rules are indispensable and will apply to those who have been excommunicated as well as to others.

The apostles and other officers of the Latter-Day Saints have been commissioned by revelations, visions, angels, &c., but not by a personal appearance of the Saviour to a multitude.

Ans. 4 th.—The apostles, officers, and members in general of the Saints of ALL AGES, possess miraculous gifts just in proportion to their faith.—Otherwise the New Testament is a fable; for the promises are extended to all. In short, miraculous gifts are the ordinary and legitimate fruits, or effects of the Holy Spirit, where-ever it is enjoyed; in all ages, and under all dispensations. [281]