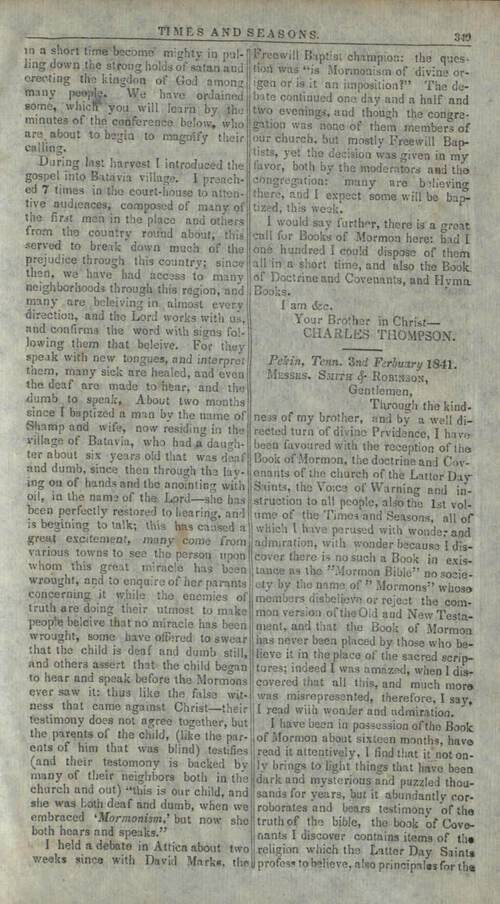 Through the kindness of my brother, and by a well directed turn of divine Prvidence, I have been favoured with the reception of the Book of Mormon, the doctrine and Covenants of the church of the Latter Day Saints, the Voice of Warning and instruction to all people, also the 1st volume of the Times and Seasons, all of which I have perused with wonder and admiration, with wonder because I discover there is no such a Book in existence as the [“]Mormon Bible” no society by the name of [“]Mormons” whose members disbelieve or reject the common version of the Old and New Testament, and that the Book of Mormon has never been placed by those who believe it in the place of the sacred scriptures; indeed I was amazed, when I discovered that all this, and much more was misrepresented, therefore, I say, I read [with] wonder and admiration.

I have been in possession of the Book of Mormon about sixteen months, have read it attentively, I find that it not only brings to light things that have been dark and mysterious and puzzled thousands for years, but it abundantly corroborates and bears testimony of the truth of the bible, the book of Covenants I discover contains items of the religion which the Latter Day Saints profess to believe, also principales for the [349] regulation of the church which seems to have been given by revelation since, as well as before, its organization, this seems to be very appropriate and not at all in contradiction with the scriptures. The Voice of Warning I think contains nothing but plain truth and sound reason, but alas! alas! when I read in the Times and Seasons of the persecution of the church of Latter Day Saints, I am struck with astonishment to think of such horrid and bloody persecutions in our land of boasted liberty, and in the midst of christnedom; good Lord! is blood and slaughter the religion of the Prince of peace? what! to see a bloody mob, headed by a band of men denominating themselves the ministers of the gospel, marching forth with sword in hand, taking the lives of innocent men, women and children, in order to maintain their religion, instead of maintaining it by the sword of truth, and power of the word of God: Ah! but their craft is in danger. Is not this enough to drive men into the, doctrine of infidelity? I verily believe, but for the interposition of divine Providence in placing the Voice of Warning before my eyes, by which I become convinced that they are not the ministers of the gospel, but priests of sectarians, that I should have fallen into the doctrine myself. Yours Respectfully.