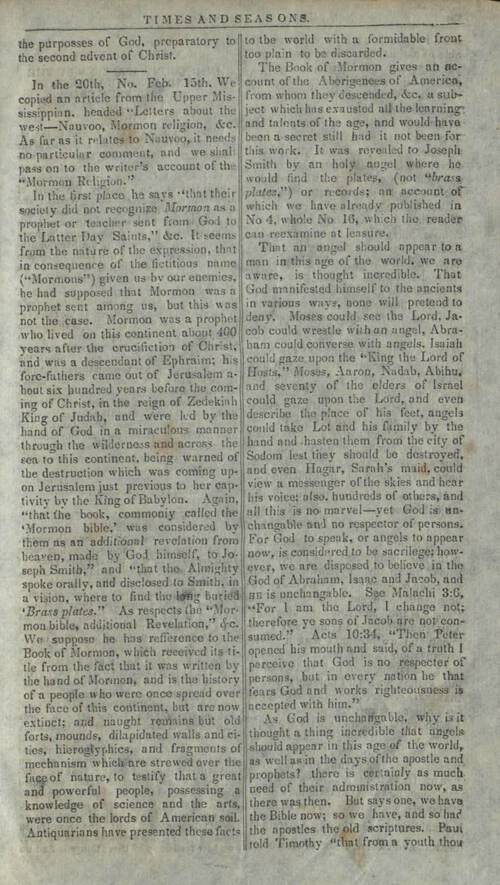 In the 20th, No. Feb. 15th. We copied an article from the Upper Mississippian, headed “Letters about the west—Nauvoo, Mormon religion, &c. As far as it relates to Nauvoo, it needs no particular comment, and we shall pass on to the writer’s account of the “Mormon Religion.”

In the first place he says “that their society did not recognize Mormon as a prophet or teacher sent from God to the Latter Day Saints,” &c. It seems from the nature of the expression, that in consequence of the fictitious name (“Mormons”) given us by our enemies, he had supposed that Mormon was a prophet sent among us, but this was not the case. Mormon was a prophet who lived on this continent about 400 years after the crucifiction of Christ, and was a descendant of Ephraim; his fore-fathers came out of Jerusalem about six hundred years before the coming of Christ, in the reign of Zedekiah King of Judah, and were led by the hand of God in a miraculous manner through the wilderness and across the sea to this continent, being warned of the destruction which was coming upon Jerusalem just previous to her captivity by the King of Babylon. Again, “that the book, commoniy called ‘Mormon bible,’ was considered by them as an additional revelation from heaven, made by God himself, to Joseph Smith,” and “that the Almighty spoke orally, and disclosed to Smith, in a vision, where to find the long buried ‘ Brass plates.” As respects the “Mormon bible, additional Revelation,” &c. We suppose he has refference to the Book of Mormon, which received its title from the fact that it was written by the hand of Mormon, and is the history of a people who were once spread over the face of this continent, but are now extinct; and naught remains but old forts, mounds, dilapidated walls and cities, hieroglyphics, and fragments of mechanism which are strewed over the face of nature, to testify that a great and powerful people, possessing a knowledge of science and the arts, were once the lords of American soil. Antiquarians have presented these facts to [the] world with a formidable front too plain to be discarded.

The Book of Mormon gives an account of the Aborigenees of America, from whom they descended, &c. a subject which has exausted all the learning and talents of the age, and would have been a secret still had it not been for this work. It was revealed to Joseph Smith by an holy angel where he would find the plates, (not “brass plates,”) or records; an account of which we have already published in No 4, whole No 16, which the reader can reexamine at leasure.

That an angel should appear to a man in this age of the world, we are aware, is thought incredible. That God manifested himself to the ancients in various ways, none will pretend to deny. Moses could see the Lord, Jacob could wrestle with an angel, Abraham could converse with angels, Isaiah could gaze upon the “King the Lord of Hosts,” Moses, Aaron, Nadab, Abihu, and seventy of the elders of Israel could gaze upon the Lord, and even describe the place of his feet, angels could take Lot and his family by the hand and hasten them from the city of Sodom lest they should be destroyed, and even Hagar, Sarah’s maid, could view a messenger of the skies and hear his voice: also, hundreds of others, and all this is no marvel—yet God is unchangeable and no respector of persons. For God to speak, or angels to appear now, is considered to be sacrilege; however, we are disposed to believe in the God of Abraham, Isaac and Jacob, and HE is unchangable. See Malachi 3:6, “For I am the Lord, I change not; therefore ye sons of Jacob are not consumed.” Acts 10:34, “Then Peter opened his mouth and said, of a truth I perceive that God is no respecter of persons, but in every nation he that fears God and works righteousness is accepted with him.”

As God is unchangable, why is it thought a thing incredible that angels should appear in this age of the world, as well as in the days of the apostle and prophets? there is certainly as much need of their administration now, as there was then. But says one, we have the Bible now; so we have, and so had the apostles the old scriptures. Paul told Timothy “that from a youth thou [353] hast known the scriptures which are able to make thee wise unto salvation:” yet they were divided into sects and parties, all understanding the scriptures their own way; and it was necessary that angels should appear to them, notwithstanding all their former revelations, and that too after they had been privileged with the ministry of Christ during his life, and he had been slain upon the cross, as was in the case of Peter when he was led out of the prison by an angel, also Cornelius the Centurian, and John upon the Isle of Patmos, Mary Magdalene, and also the Roman Soldiers who kept the sepulchre, and in many instances, which are too numerous to mention here. The Lord also, appeared to his apostles at different times after his resurrection, and we are informed that he appeared unto five hundred at once.

What individual in his sober senses, possessing common intellect, will profess to believe the sacred scriptures, and then have the daring affrontery to say that God has ceased to give revelations, that angels have ceased to come to earth, and then say, I am consistant? None but hireling priests and their dupes, who, by their inconsistencies, have driven the world into infidelity.

Much might be written upon this subject, but we have already been more prolix than we had intended.

The writer seems to express himself with full confidence as though the whole “Mormon” system was a mere sham, or delusion; however, he is willing to acknowledge that the society is “more sinned against that sinning.” This, we think, is an unbiased sentiment; and we presume that a candid investigation would unmask a field of light and intelligence to his understanding, so that he would not only believe that “this people, after all are generally quite conscientious in the matter,” but he would be “quite couscientious” himself. For a better understanding [of] the book of Mormon, the plates upon which it was engraven, and the manner of translation &c. we subjoin the title page, and also the testimony of the witnesses, which testimony is sufficient to establish the fact in any court under heaven, and CANNOT be controverted.

THE BOOK OF MORMON:

AN ACCOUNT WRITTEN BY THE HAND OF MORMON, UPON PLATES TAKEN FROM THE PLATES OF NEPHI.

THE TESTIMONY OF THREE WITNESSES.

Be it known unto all nations, kindreds, tongues, and people [see three witnesses’ testimony and also testimony of eight witnesses]