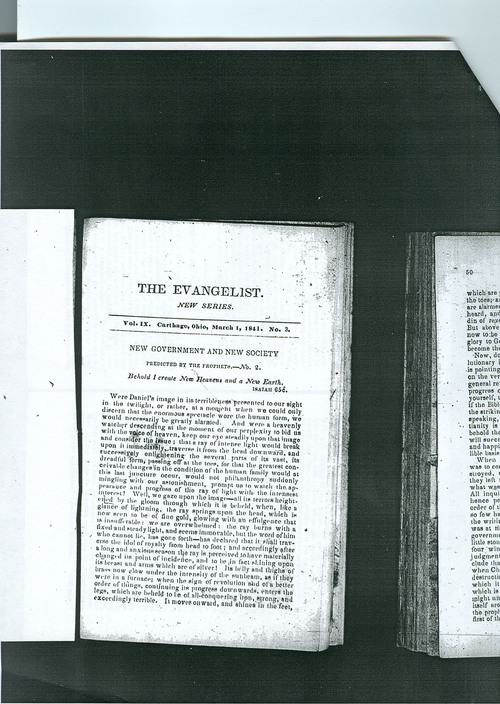 We have had a visit of the Mormons. There came hither a few weeks ago, according to a previous appointment, a Mr. Lummerce, a preacher of this sect. The topic was the Millennium, of course; and we attended, with the rest of our good citizens. The views delivered were precisely those of Winchester, afterwards retailed in a contracted form by Elias Smith.

In conclusion, he engaged to prove at a subsequent meeting, that the Mormon Bible had been a subject of prediction with the Jewish prophets. At this juncture we could not resist the temptation which his words afforded us of asking him for the texts to which he intended to refer for authority. He gave us them to the amount of perhaps half a dozen. The curiosity of the people was excited, and at the succeeding meeting the house was crowded. After his thundering harangue we sat down cooly and examined his texts, as we say, one by one. The first of them which we heard, was in Ezekiel c. 37, verses xvi and xvii:—“Moreover, thou son of man, take thee one stick, [62] and write upon it, “For Judah, and for the Children of Israel, his companions.” Then take another stick, and write upon it, “For Joseph, the stick of Ephraim, and for all the House of Israel, his companions.” And join them one to another unto one stick, and they shall become one stick in thine hand.” It is known to our readers, no doubt that the nation of Israel was dismembered in the days of Rehoboam, the son of Solomon. This schism was the source of unnumbered woes to both parties, for they continued to vex each other till the moment that God carried the ten tribes into Assyria. The intention of Ezekiel’s prophecy then, is to promote the hopes of God’s people, who were still existing in the nation, by giving them assurances that the time was coming when the tribes should again be united, and form but one people, or to use God’s own words: “I will make them one nation—they shall be no more two nations, neither shall they be divided into two kingdoms any more at all.”—v.22. But what does one reader imagine the two sticks or sceptres signified in the hand of our sagacious Mormon? I will tell him. He vouched then with much sound and little sense, that the two sticks signified was our Bible and the Book of Mormon!! which in these latter days were like the two scepters in the hands of the prophet, to become one Book for converting the world—to Mormonism of course, and for the bringing back of the Jews to their own land! We need not tell the reader that this commissioned officer of Jeseph Smith, Jr., supplied us in this place with two sticks to break his own head with. It was enough: all his other references were equally pertinent, and equally impertinent; the people perceived the imposture, and like a candle in the socket, Mormonism expired on the floor of the schoolhouse, where it had been for a few meetings lighted up. But this only by the way.

We promised to show to our readers that this vulgar imposture of the Mormon Bible had anticipated Christianity by hundreds of years, and had described the aborigines of the American continent as being posssessed of all its peculiar privileges, principles and ordinances long before the divine institution was brought into existence by its proper author, our Lord Jesus Christ. And this will we do, if God permit.

We have had ourselves, during last year, touching the name Christian, somewhat of a contention, characterized on all sides perhaps with too great intensity of feeling. Had King Benjamin of the Golden Bible been our dictator, he would have settled the business in short order. When he had resigned the government in favor of his son Mosiah, and was about to go the way of all the earth, he promised to give his people a name. Well, the time came for imposing upon them the promised cognomen; and what does our reader imagine King Ben selected for the grand appellation? He chose Christian. “And now,” [63] said his kingship, “it shall come to pass that whosoever shall not take upon them the name of Christ, must be called by some other name; therefore he findeth himself on the left hand of God. And I would that you should remember also that this is the name that I said I should give unto you.” Here, then, is the name of Christ imposed with a vengeance. Condemnation is declared to be the fate of all such as should refuse to wear it. And mark, reader, all this took place 124 years before Christ came, and ere the name Christian was ever uttered on earth. King Benjamin was a preacher as well as a prince, and on one occasion, is said to have acquitted himself with such astonishing success, that his audience, like that of the late Mr. Whitfield’s is described, as crying out in an agony of penitence, “O have mercy, and apply the atoning blood of Christ, that we may receive the forgiveness of our sins, and our hearts be purified; for we believe in Jesus Christ the Son of God.”—page 150. Abinadi was a preacher, and held forth in the presence of King Noah. But Noah had too much experience to believe without evidence, and he ordered his guards to give the prophet his mittimus; so they burnt him. But Alma, a youth belonging to the priesthood; picked up the doctrine, and resorting to the woods of Mormon, he taught them first privately, and afterwards publicly, till 204 souls were baptized, and finally 450. These formed the first Christian church, something upwards of a hundred years before our religion was founded. We shall here quote the history of the first Mormon baptism introduced by Alma. Observe, however, that the compiler of this profane romance had no settled apprehension of the Christian baptism as being for the remission of sins.

This piece of knowledge the impostors obtained from Rigdon at a later date than that of the publication of their Book. But here follows the baptism:

“And it came to pass that he said unto them, behold, here are the waters of Mormon; for thus were they called. And now, as ye are desirous to come into the fold of God, and to be called his people, and are willing to bear one another’s burdens, that they may be light; yea, and are willing to mourn with those that mourn; yea, and comfort those that stand in need of comfort and to stand as witnesses of God at all times, and in things and in all places that ye may be in, even until death, that ye may be redeemed of God, and be numbered with those of the first resurrection, that ye may have eternal life. Now I say unto you, if this be the desire of your hearts, what have you against being baptized in the name of the Lord, as a witness before him that you have entered into a covenant with him that ye will serve him and keep his commandments? that he may pour out his spirit more abundantly upon you. And now, when the people had heard these words, they clapped their hands for joy, and exclaimed, this is the desire of our hearts.” [64]

“And now it came to pas that Alma took Helam, he being one of the first, and went and stood forth in the water, and cried, saying, O Lord, pour out thy spirit upon thy servant, that he may do this work with holiness of heart. And when he had said these words, the spirit of the Lord was upon him, and he said Helam, I baptize thee, having authority from the Almighty God, as a testimony that ye have entered into a covenant to serve him until you are dead, as to the mortal body; and may the spirit of the Lord be poured out upon you: and may he grant unto you eternal life, through the redemption of Christ, whom he has prepared from the foundation of the world. And after Alma had said these words, both Alma and Helam were buried in the water; and they arose and came forth out of the water rejoicing, being filled with the spirit. And again, Alma took another, and went forth a second time into the water, and baptized him according to the first, only he did not bury himself again in the water. And after this manner he did baptize every one that went forth to the place of Mormon; and they were in number about 204 souls; yea, and they were baptized in the waters of Mormon, and were filled with the grace of God: and they were called the church of God, or the church of Christ, from that time forward.

“And it came to pass that whosoever was baptized by the power and authority of God, was added to his church.”

Of such stuff is this miserable and profane romance—the Golden Bible, composed, fitted, it may be, to deceive the unjudging, but certainly utterly incapable of commanding the belief of any human being who has the least desire to be guided by proof and truth. We once conversed with the imposter himself. He gave us, on the wharf at Cincinnati, his experience, and when we heard it, we could not refrain from telling him in answer, that there was not an old Methodist lady in the community, who would not if put to the proof, tell a better story. The Book of Mormon, in spirit, matter and form, is, to all intents and purposes, worthy of Joseph Smith, Jr.,— its author and proprietor.

But what we wish our reader to observe by the quotations made from the profane Book of Mormon, is this, that the name of Christ, the peculiar principles and doctrines of the gospel, baptism, and all other matters recorded there as having been taught in America before, long before they had any existence on the other continent, and hundreds of years before Christ came upon earth.