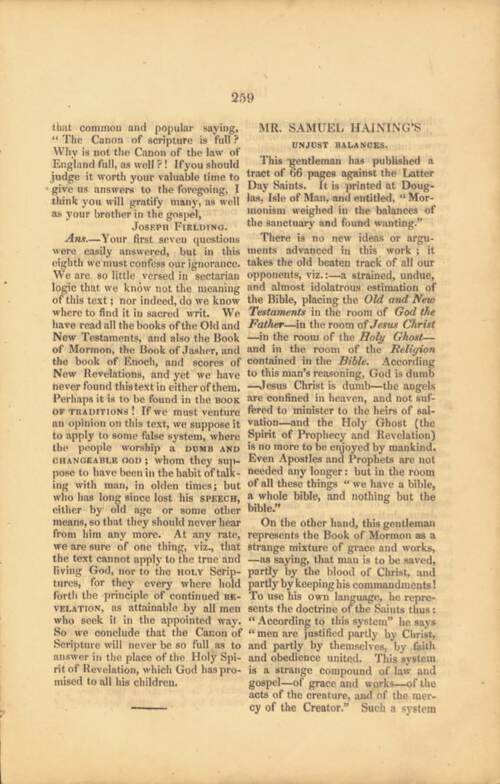 This gentleman has published a tract of 66 pages against the Latter Day Saints. It is printed at Douglas, Isle of Man, and entitled, “Mormonism weighed in the balances of the sanctuary and found wanting.”

There is no new ideas or arguments advanced in this work; it takes the old beaten track of all our opponents, viz.:—a strained, undue, and almost idolatrous estimation of the Bible, placing the Old and New Testaments in the room of God the Father—in the room of Jesus Christ—in the room of the Holy Ghost—and in the room of the Religion contained in the Bible. According to this man’s reasoning, God is dumb—Jesus Christ is dumb—the angels are confined in heaven, and not suffered to minister to the heirs of salvation—and the Holy Ghost (the Spirit of Prophecy and Revelation) is no more to be enjoyed by mankind. Even Apostles and Prophets are not needed any longer: but in the room of all these things “we have a bible, a whole bible, and nothing but the bible.”

On the other hand, this gentleman represents the Book of Mormon as a strange mixture of grace and works,—as saying, that man is to be saved, partly by the blood of Christ, and partly by keeping his commandments! To use his own language, he represents the doctrine of the Saints thus: “According to this system” he says “men are justified partly by Christ, and partly by themselves, by faith and obedience united. This system is a strange compound of law and gospel—of grace and works—of the acts of the creature, and of the mercy of the Creator.” Such a system [259] he thinks “is bad, dangerous, and destructive.” But destructive or not, we intend to teach this generation that they must believe in Jesus, and KEEP HIS COMMANDMENTS, OR THEY CANNOT BE SAVED.

This abominable doctrine of being saved by grace without works is the principle cause, I had like to have said the only cause, of the awful state of things which exists at this present time in Christendom. Men can continue in luxury, idleness, and extravigance; they can oppress the poor, the sick, the afflicted, the widow, and the fatherless. They can see the naked and hungry, starving and perishing around them by millions, and not impart of their substance, or dispense with their extravigance in order to relieve them. And yet they are made to believe that they can belive in Jesus and say, “Lord, Lord,” and be saved by grace without works. This same Jesus whom they thus mock has said, “Go sell that thou hast and give to the poor,” “If any have two coats, let him give to him who has none; and him that has meat, let him do likewise.” He has also said that, “Whosoever shall give a cup of water to a disciple of Jesus, shall not loose his reward.”—He has said, “Depart ye cursed, &c.” “For I was an hungered and ye gave me no meat—I was athirst and ye gave me no drink; naked, and ye clothed me not; sick and in prison, and ye visited me not;” and that, “inasmuch as they had not done it unto one of the least of his brethren, they had not done it unto him.” Again, he has said, that, “NOT EVERY ONE THAT SAYETH ‘LORD, LORD,’ SHALL ENTER INTO THE KINGDOM OF HEAVEN, BUT HE THAT DOETH THE WILL OF MY FATHER WHO IS IN HEAVEN.”

Such then is the doctrine for which the Book of Mormon and the Saints are condemned by the clergy of the present age. But, we count it all joy to be worthy to be persecuted for RIGHTEOUSNESS SAKE. IT IS MR. H’S UNJUST BALANCES, AND NOT THE DOCTRINE OF THE SAINTS THAT IS FOUND WANTING. [260]