Letters About the West 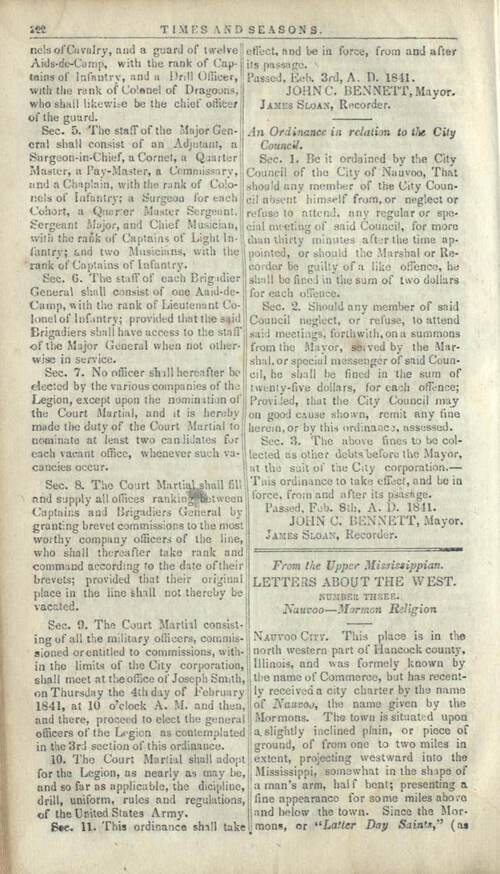 From the Upper Mississippian.

LETTERS ABOUT THE WEST.

NAUVOO CITY. This place is in the north western part of Hancock county, Illinois, and was formerly known by the name of Commerce, but has recently received a city charter by the name of Nauvoo, the name given by the Mormons. The town is situated upon a slightly inclined plain, or piece of ground, of from one to two miles in extent, projecting westward into the Mississippi, somewhat in the shape of a man’s arm, half bent; presenting a fine appearance for some miles above and below the town. Since the Mormons, or “Latter Day Saints,” (as [322] they call themselves) were so wantonly driven from their homes and estates in Missouri, by an armed mob, under the excited authorities of that State, these persecuted people have settled in this town, and the adjacent country upon both sides of the Mississippi—and added from 75 to 100 buildings, mostly neat and painted, spread over a large extent of ground, and covering the plain and the bluffs in the rear.—These numerous new, bright looking buildings, scattered about amongst the trees and shrubbery which abound here, present, in warm weather, a delightful appearance. Under the shade of some beautiful shrubbery near the river’s brink, seats are erected for the accommodation of the society, at their religious meetings. The spot selected is favorable to a calm and serene temper, and a devotional frame of mind.

Nauvoo is said to have a population of about 3000 inhabitants some 300 buildings, several small traders, Tavern keepers, Phisicians, and various kinds of mechanics and laborers: and some water craft, among which is a small steam-boat called Nauvoo. The landing, soil and timber about the town, are favorable to its future growth but being at the head, instead of the foot of the Rapids, its location is not so advantageous for trade as that of Warsaw or Keokuck, mentioned in my last letter. Besides this, there being considerable low lands upon the Islands in its vicinity, their decomposing vegetable matter is supposed to send forth delaterious exhaltations prejudicial to the health of the town. However, Nauvoo has a fine country in its rear, and if to many drones and rogues do not creep in among these generally quiet, industrious and economical people, we may expect to see a very considerable city built up here—particularly as many of this sect in Europe, are now known to be about removing to this country—and indeed some two hundred have already arrived at Nauvoo, and the vicinity. Mr. Smith is reported to have said that it is destined to be the largest city in the world! It is some 18 miles above Warsaw, and 6 or 8 below Fort Madison.

RELIGION OF THE MORMONS. In the course of two land journeis between Stephenson and Quincy, I stopped over night at Nauvoo, rode one day in company with a Mormon preacher, and two days with one of the most respectable private members of the society. I also saw, in Stephenson, the celebrated Joseph Smith, but had no opportunity to converse with him respecting the peculiar tenets of their religion. Mr. Smith (commonly called “Joe. Smith,”) is a stout, muscular, course looking man, of about 32 or 33 years of age, and six feet high—and is said to be a man of good natural talents, but of inferior education—and that, as a scholar and logician, Mr. Rigdon is much his superior. Dr. Bennett, one of their preachers, and with whom I rode as above, appeared to be a man of considerable reading and general intelligence—to possess a christian temper, and pretty correct ideas of personal piety. He was courteous and gentlemanly in his deportment, though somewhat selfish, exclussve and bigoted in notions about other sects and creeds. I, however, derived considerable information, and consequent satisfaction from conversing with him upon the subject of this strange religion. I may not be able in this brief and hasty newspaper sketch, to do full and exact justice to their creed as represented by this and the other gentleman, but I will aim to do so.

I understood from them as follows, vix:—That their society did not recognize Mormon, as a Prophet or Teacher sent from God to the “Latter Day Saints”—that they did not discard the Bible as used by other christian sects—that the book, commonly called “the Mormon Bible,” was considered by them as an additional revelation from heaven, made by God himself, to Joseph Smith, when 17 years of age, and under deep and prayerful concern of mind about his spiritual condition—that it relates principally to the history of the house of Ephraim and their descendants, which these people say was lost, or omitted, in the compliation of the generally accredited christian Bible. That the Almighty spoke orally, and disclosed to Smith, in a vision, where to find the long buried “Brass Plates,” containing some unknown hieroglyphics, the further and hitherto undiscovered history of [323] this branch of the Jewish nation—which history foretells, as they say, the character, condition and duty, of the “Latter Day Saints,” or Mormons— and the persecutions which they have endured in Missouri and elswhare, on account of their religion. They hold that the Lord made a verbal, personal communication to Smith, an uneducated and ignorant youth of 17, and instructed him to emyloy persons to translate the history contained in these few strange characters, engraven upon these brass plates, and that the Almighty stood by, and by a miraculous exercise of infinite power and wisdom, told Smith the meaning of the letters and characters upon the plates, and directed him to communicate it to the ignorant and uninspired translators, to be by them penned down for publication. And also that at a certain stage of the proceeding, the Almighty directed Smith to cease the work of translation, and again to bury the plates until mankind should become more virtuous, and better qualified for the reception of a further and complete revelation of the whole matter, at which time the Lord would again appear upon earth, and direct Smith how to proceed upon this momentous subject!!!

The object and plan of these letters will not admit of pursuing this matter further, or commenting upon the monstrous delusion that could take possession of so many apparently sensible and intelligent people—or upon the success with which an uneducated man, like Smith, has impressed belief in this extraordinary imposition, which fact induces the belief that he is a man of very considerable talents. But I really believe that these people, after all, are generally quite conscientious in this matter—are more to be pitied than despised, and “more sinned against than sinning.”

When putting the preceding article in type we intended to have made some corrections, but time wil not admit in this number; we wil make them in a future No. The writer, no doubt, intended to give a fair statement, and in the main, did; but respecting our faith, (on some points,) the book of Mormon, &c., he is widely from the mark.—ED.