No. 1. Despise Not Prophesyings 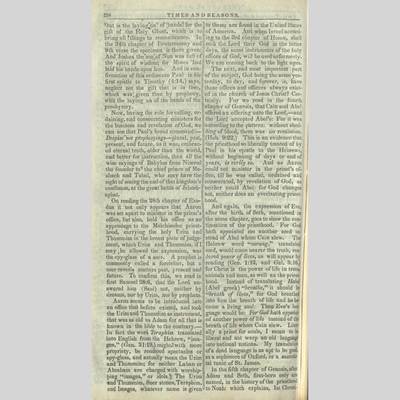 For the Times and Seasons.

. . . On reading the 28th chapter of Exodus it not only appears that Aaron was set apart to minister in the priest’s office, but also, held his office as an appendage to the Melchisedec priesthood, carrying the holy Urim and Thummim in the breast plate of judjement, which Urim and Thummim, if I may be allowed the expression, was the spy-glass of a seer. A prophet is commonly called a foreteller, but a seer reveals matters past, present and future. To confirm this, we read in first Samuel 28:6, that the Lord answered him (Saul) not, neither by dreams, nor by Urim, nor by prophets.

Aaron seems to be introduced into an office that before existed, and took the Urim and Thummim as instrument, that was as old as Adam for all that is known in the bible to the contrary.—In fact the word Teraphim translated into English from the Hebrew, “images,” (Gen. 31:19,) might, with more propriety, be rendered spectacles or spy-glass, and actually mean the Urim and Thummim; for neither Laban or Abraham are charged with worshipping “images,” or idols. The Urim and Thummim, Seer stones, Teraphim, and Images, whatever name is given to them; are found in the United States of America.

And when Israel according to the 3rd chapter of Hosea, shall seek the Lord their God in the latter days, the same instruments of the holy offices of God, will be used as formerly.