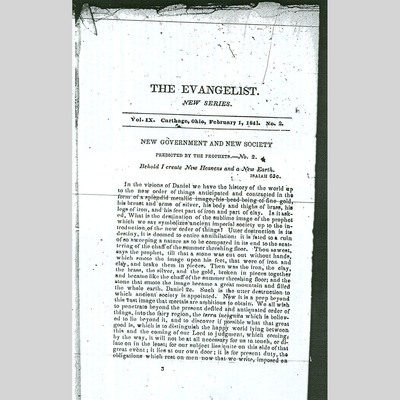 In the prophecies there are some seeming contradictions between predictions and their accomplishment.

“When, both a prediction, and the event foretold in it, are recorded in Scripture, there is, sometimes, an appearance of disagreement and inconsistence between them.

This appearance generally arises from some difficulty in understanding the true meaning of the prediction; it may be occasioned by any of those causes which produce the peculiar difficulties of the prophetical writings: and, it is to be removed by the same means which serve for clearing these difficulties.

In particular, it often proceeds from the figurative style of prophecy.

It may be occasioned by the ordinary manner of the prophets, predicting what relates to the moral and religious state of the world, in metaphors borrowed from parts of the natural world.

It may be occasioned by the prophets expressing what relates to the Christian dispensation and worship, in terms borrowed from the Mosaic religion.

It may be occasioned, by a prediction relating only to one part of a complex character, or event, and, on that account, seeming to be inconsistant with other parts of it; and the appearance will be removed, by taking in such predictions as relate to these other parts, and considering them all in connexion.

It sometimes arises from several of these causes, or from them all together.”

But, reader, although for special purposes the holy scriptures present themselves for our faith with many difficulties, and candidly propound for examination things “hard to be understood,” yet it is not so with the Book of Mormon. All is plain in [42] the Golden Bible.

There is neither type, figure, symbol, nor emblem here; all is as literal in the predictions of fathers Lehi and Nephi as history itself. Take the following as descriptive of the talent of Lehi for prophecy. “Yea, even six hundred years from the time that my father left Jerusalem, a prophet would the Lord God raise up among the Jews, even a Messiah; or, in other words a Savior of the world. And he also spake concerning the prophets, how great a number had testified of these things, concerning this Messiah, of whom he had spoken, or this Redeemer of the world.

Wherefore, all mankind were in a lost and fallen state, and ever would be, save they should rely on this Redeemer.

And he spake also, concerning a prophet, who should come before the Messiah, to prepare the way of the Lord; yea, even he should go forth and cry in the wilderness, prepare ye the way of the Lord, and make his path straight; for there standeth one among you whom ye know not; and he is mightier than I, whose shoe’s latchet I am not worthy to unloose. And much spake my father concerning this thing.

And it came to pass after my father had spoken these words, he spake unto my brethren concerning the gospel which should be preached among the Jews, and also concerning the dwindling of the Jews in unbelief. And after they had slain the Messiah who should come, and after he had been slain, he should rise from the dead, and should make himself manifest by the Holy Ghost, unto the Gentiles.

Yea, even my father spake much concerning the Gentiles, and also concerning the house of Israel, that they should be compared like unto an olive tree, whose branches should be broken off, and should be scattered upon all the face of the earth. Wherefore, he said it must needs be that we should be led with one accord, into the land of promise unto the fulfilling of the word of the Lord, that we should be scattered upon all the face of the earth. And after the house of Israel should be scattered, they should be gathered together again; or, in fine, after the Gentiles had recieved the fullness of the gospel, the natural branches of the olive tree, or the remnants of the house of Israel, should be grafted in or come to the knowledge of the true Messiah, their Lord, and their Redeemer. And after this manner of language did my father prophesy and speak unto my brethren; and also many more things, which I do not write in this book; for I have written as many of them as were expedient for me [43] in mine other book. And all these things of which I have spoken, were done as my father dwelt in a tent, in the valley of Lemuel.”

What a miserable commixture the above citation is, of New Testament scriptures and words and phrases, borrowed from Methodism and other corrupted systems of Protestantism!

Here we have the advent of the Messiah, the entrance of the Harbinger, Baptism, the immersion of the Saviour, the gospel, the death of Christ, his resurrection, Paul’s olive tree, the grafting in of the Gentiles, the dispersion of the Jews; and their final restoration, all told us in a breath; and told us in a breath; and told us too, without figure, trope, type, symbol, or emblem, in the very language of the New Testament and modern divinity! Swedenborgh avered he was in heaven and saw an angel of a size so enormous that it would have required many days to travel over the bridge of his nose; and it is said that his whole system was written as a burlesque, and to test the credulity of his fellow creatures. But many have believed it nevertheless: and we have even among us in the far West, Swedenborghers, or New Jerusalemites, for they like the Mormons, imagine that their master was a deputy under Christ to found the Millennial church. But Swedenborgh was vailed in figures, tropes, and parabols: It: is not so with Joseph Smith: He speaks plainly. He lies openly; and hopes to succeed by inspiring falsehood with the fearlessness of truth. You have heard Lehi. Here comes his dear son Nephi, who speaking of the first coming of the Messiah says, “And he spake unto me again, saying, look! And I looked, and I beheld the Lamb of God going forth among the children of men. And I beheld multitudes of people who were sick, and who were afflicted with all manner of diseases, and with devils, and unclean spirits, and the angel spake, and shewed all these things unto me. And they were healed by the power of the Lamb of God, and the devils and the unclean spirits were cast out.

And it came to pass that the angel spake unto me again, saying, look! And I looked and beheld the Lamb of God, that he was taken by the people; yea, the Son of the everlasting God was judged of the world; and I saw and bear record. And I, Nephi, saw that he was lifted up upon the cross, and slain for the sins of the world. And after he was slain, I saw the multitudes of the earth, that they were gathered together to fight against the apostles of the Lamb; for thus were the twelve called by the angel of the Lord.” As the former part of Lehi’s vision related to the descent of the Messiah upon the old continent, the latter part promises his appearance on the new, namely: America, and as he had made twelve apostles for the one, so he would have as many for the other; accordingly he proceeds.

“And I saw the heavens open, and the Lamb of God descending out of heaven; and he came down and shewed himself [44] unto them. And I also saw and bear record that the Holy Ghost fell upon twelve others, and they were ordained of God, and chosen.

And the angel spake unto me, saying, behold the twelve disciples of the Lamb, who are chosen to minister unto thy seed. And he said unto me, thou remembereth the twelve apostles of the Lamb? Behold they are they who shall judge the twelve tribes of Israel: wherefore, the twelve ministers of thy seed shall be judged of them; for ye are of the house of Israel: and these twelve ministers whom thou beholdest, shall judge thy seed. And behold they are righteous forever: for because of their faith in the Lamb of God, their garments are made white in his blood.”

Perhaps there could not be framed a more daring piece of profanity than the above quotation. It demonstrates that the heart of the wretched being who composed it, was lost to all sense of divine authority. Who, but a person disbelieving wholly in our religion could have dared to treat the Son of the living God, and the sacred things of our religion thus?