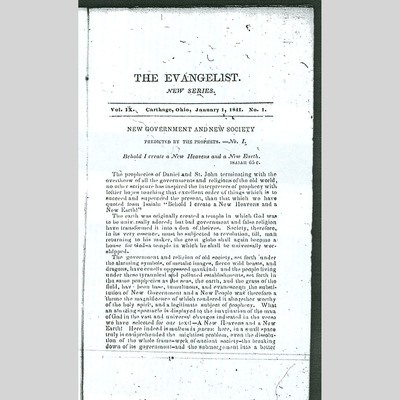 MORMON BIBLE— No. I.

The Mormon Bible, of which the above is the title page, purports to give the history of a certain family which, under the guidance of its imagined father named Lehi, emigrated from Jeru- [17] salem southward to the regions around the red sea about the year of the world 3400, and afterwards from these parts westward to the American continent about six hundred years anterior to the christian era. The family is fancifully described as having kept and preserved records of its affairs for the period of a thousand years, extending from the time of its imagined arrival in the new world to the four hundred and twentieth year after Christ. The plates upon which the ideal history is said to have been engraved were called the plates of Nephi. These descending with other ancestorial lumber from father to son through a long list of governors came finally by the favour of Ammaron into the possession of Mormon son of Mormon a lineal descendent of the original settlers, and a priest and prince among his brethren. Mormon added to them his own record, and at his death consigned the whole to his son Maroni.

To this history is added by Maroni an abridgement of the history of another family styled the family of Jared. Said Jared is affirmed to have been one of those antique personages who were present at the building of the tower of Babel, and who were scattered abroad upon the face of the earth in consequence of the confusion of tongues which obtained at that memorable era.

Finally: this son of Mormon Maroni who had abridged the history of Jared, adds to the whole the things of his day—seals up the vision and concludes the fiction by depositing the ideal plates with their fancied contents under ground, to be brought forth, according to prophecy, in due season, or 1428 years after their interment, by Joseph Smith Jr, author and proprietor, while digging for money amid the hills of Manchester, Ontario Co, N.Y.

These are the outlines of the Book of Mormon, certainly one of the dullest, baldest and most barren of interest in both thought and expression of all the books of fiction it has ever been our fortune to peruse. The prosaic monotony, which pervades it, is scarcely broken upon once, by aught either in the form of poetry or rhetoric. The writer is, I believe on one occasion, either by extraordinary inspiration or by a very natural sympathy led to compare something to an ass; but with the exception of this figure of the ass, the whole performance from Alpha to Omega, from begnning to ending, is a tissue of the most abominable and prosaic ferrago ever published.

Saying nothing of its high-handed profanity or rather blasphemy, for it must have been written by an atheist, we hesitate not to pronounce it both in plot and under plot, in thought, expression and catastrophe the very apocrypha of all apocryphies without matter, without manner, without language, without logic, and infinitely beneath contempt as it is infinitely beneath criticism.

The boldness of this conspiracy against Christ and the apostles appears especially conspicuous in three doctrines viz:

1st. Where the imposter confounds history with prophecy, or substitutes the one for the other, putting in the mouths of his [18] fictious seers the language of the apostles and causing them to utter a thousand things concerning Christ, his apostles, John the Baptist, and the virgin Mary in the style of the New Testament four, five, and even six hundred years before the New Testament was written; and all that time before either John, Jesus, Mary, or the apostles were born into the world!

2d. Where setting up a worship which he styles the law of Moses, he does contrary to that law, transfer the priesthood to the tribe of Ephraim, of which tribe God or Moses spoke nothing as pertaining to the priesthood.

3d. And last but not least, where he projects a new church--the Millennial church--to be founded not on the scriptures alone, but upon the Bible and Book of Mormon united, of which church Joseph Smith Jr. is to be Seer, Apostle, and Fact Totum in order to confer the spirit of Mormonism on all comers, in signs, wonders, and divers miracles, according to his will!

Such are the prominent features of the history and the doctrine of Mormonism, and that the imposture may be more certainly imposed on the listener, he is first of all dazzled and afterwards won by an exhibition of the true gospel of Christ in its utmost simplicity, and in language and expression that can rarely be condemned, immediate obedience to the faith being pled for in matter and manner entirely as it is argued for among ourselves.

In reading the Book of Mormon we perceived readily that Baptism for the remission of sins is not in it, and that this is not a doctrine which is the natural growth of the system itself! It becomes a question therefore, By what accident did the advocates of this imposture graft upon their scheme this doctrine? For the plan of remission laid down by J. Smith and his co-adjutors “remission by fire” not by water: the following are his words as they stand in the Mormon Oracle page 118 Stereotyped Edition 2nd book Nephi.

“For the gate by which ye should enter is repentance and baptism by water; and then cometh the remission of sins by fire and by the holy Ghost.”

But baptism for the remission of sins and the holy spirit together with the other parts of that excellent order which distinguishes the proclamation of the gospel among our brethren, is not the only graft found in this vicious plant Mormonism. Its abettors have inoculated their deadly Upas with our plea for immediate obedience also, and now everywhere demand submission to baptism upon the spot in order to the remission of sins!

The accident by which these imposters were put in possession of our manner of stating and pleading the gospel will be shown in a subsequent No.

We have here given the outlines or most important features of the Book of Mormon considered as a book of history and doctrine. Touching its history it affects to unfold, as we have said, [19] the causes which led to the settlement of the American continent, and account for the presence on it of the aborigines or Indians. This is presumed to be done by the prosaic narative which is given of the two fictious families of Lehi and Jared, the former a Jew from Jerusalem, the latter a Gentile from Babel. Touching its doctrine we have stated that the bold and wicked projectors of this imposture have anticipated in their profane romance, by six hundred years, Christianity in all it peculiarities, and by so doing have made religion like the lame devil in the old French novel, stand upon one foot--namely; Prophecy alone. Yes, the imposters who invented this fable seem to have had so limited an acquaintance with our religion considered as a system depending upon the harmony which subsists between prediction and fact, prophecy and history, or the apostles of Christ and prophets of the Jews, that they have absolutely erected christianity upon one foot namely: prophecy alone! and have, made the woods of Mormon ring with faith and repentance; the holy spirit, the resurrection, the atonement, crucifixion, baptism and all other christian matters 540 years before the birth of the Redeemer. See Book Mosiah pg: 189-215.

There is a difference between foreknowing and foretelling, as there is also a difference between false prophets and true ones. The true prophet foretels, but he does not foreknow; hence the Jewish prophets being used as mere instruments of the holy spirit to foretel without understanding what they foretold, did of their own accord, as Peter informs us, inquire accurately and diligently into the hidden imports of their own predictions touching the suffering of the Messiah, and the glory which was to follow. But their curiosity was repressed by the spirit’s revealing to them that all the things embodied in their predictions were for another people and another dispensation: so that the Jewish prophets died and were buried without knowing the import of their own prophecies: infidels and ignorant people suppose that true prophets foreknow events, and false ones do not. Now the very reverse of this is the truth in the case, the true prophet is ignorant, the false prophet is knowing: the former is an instrumen in the hand of God, and merely foretels; the latter is a knave in the hand of the Devil and foretels only because he foreknows by cunning calculations. Hence even a true prophecy is but one witness at most; and would not be a witness at all unless sustained by history; or the regular occurrence of all those events to which its predictions point. God has, therefore, always raised up men to record history as well as men to record prophecy, and it is only when those two witnesses or two branches of testimony go hand in hand that they form one infallible proof for our faith to rest upon. Hence Christianity, as written in the New Testament, is said to stand upon the foundations of the apostles and prophets: but Christianity as ministered in the ideal [20] family of Lehi in South America, 500 years before there was any Christianity, is made to stand upon prophets alone; and who are they? Forsooth, fathers Lehi, Nephi, Jacob, Omni, Mosiah, Alma, and Mormon, or rawhead and bloodybones, for that is the etymological import of the word Mormon.

But that our readers may see that fathers Lehi, Nephi, and the other imaginary gentry of the Golden Bible, are to be classed with those prophets who foreknow as well as foretel, we will let them hear Rabbi Nephi in his plainess. After observing that Isaiah spoke too dark or hard for his people, he tries his hand himself, and says, “Wherefore I shall prophecy according to the plainness which has been with me since I came out of Jerusalem with my father.” “Again, my soul delighteth in plainness.” Humph! father Nephi. Again: “Behold I proceed with mine own prophecies according to my plainness; in the which I know that no man can err.” Here, then, the point before father Nephi is to outstrip the Jewish prophet in plainness, and to foretel the things of Christ in so striking a manner, that there shall be no need of history in the case, or any error whatever. But let us hear Mr. Rawhead in his plainness:

Now, reader, if you are a prophet, beat this in plainness, if you can. Nephi felt so relieved by unburdening himself of this oracle, that he could not help expressing his high satisfaction thus: “And now brethren, I have spoken plain that ye cannot err.” But hear him again: “As the Lord liveth, there is none other name given under heaven, save it be this Jesus Christ of which I have spoken, whereby man can be saved.” Having not only beat the Jewish prophets in plainness, but rivalled the apostles themselves, and even hit upon their very words, what think you reader, ought to be Nephi’s reward? He tells us that on account of the plain manner in which he spoke, the Lord promised to have his predictions recorded, and “handed down from generation to generation.”—page 104, 2 book Nephi. On the same page he says we are made alive in Christ, “we talk of Christ, we rejoice in Christ, we preach Christ, we prophecy of Christ.” This is plain work verily for the year of the world 3400 or six hundred years before Christ appeared! We could fill the Evangelist with the plain prophecies of father Nephi, but enough for the present.

Mr. Goblin was certainly an Isaiah of a prophet, and must be allowed to have fairly beat him in plainness, and to have well understood what he foretold.