A Letter to Those Who Have Attended Mormonite Preaching 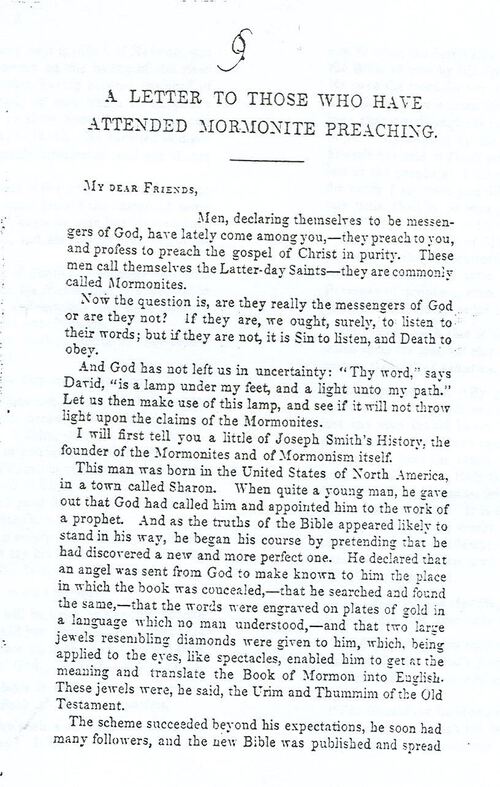 A LETTER TO THOSE WHO HAVE

Men, declaring themselves to be messengers of God, have lately come among you,—they preach to you, and profess to preach the gospel of Christ in purity. These men call themselves the Latter-day Saints—they are commonly called Mormonites.

Now the question is, are they really the messengers of God or are they not? If they are, we ought, surely, to listen to their words; but if they are not, it is Sin to listen, and Death to obey.

And God has not left us in uncertainty: “Thy word,” says David, “is a lamp under my feet, and a light unto my path.” Let us then make use of this lamp, and see if it will not throw light upon the claims of the Mormonites.

I will first tell you a little of Joseph Smith’s History, the founder of the Mormonites and of Mormonism itself.

This man was born in the United States of North America, in a town called Sharon. When quite a young man, he gave out that God had called him and appointed him to the work of a prophet. And as the truths of the Bible appeared likely to stand in his way, he began his course by pretending that he had discovered a new and more perfect one. He declared that an angel was sent from God to make known to him the place in which the book was concealed,—that he searched and found the same,—that the words were engraved on plates of gold in a language which no man understood,—and that two large jewels resembling diamonds were given to him, which, being applied to the eyes, like spectacles, enabled him to get at the meaning and translate the Book of Mormon into English. These jewels were, he said, the Urim and Thummim of the Old Testament.

The scheme succeeded beyond his expectations, he soon had many followers, and the new Bible was published and spread [1] far and wide. The town, or city as it is called, of Nauvoo, was built by Smith and his followers on the banks of the river Mississippi, and the false prophet, having become the head of a numerous party, armed a body of men which he called the Nauvoo Legion, and began to show himself in his true and proper colours. Matt. ch. vii., v. 15, 17. He revelled in dissipation, was frequently and openly intoxicated, and set shame at defiance.

Nauvoo soon became the pest of the neighbourhood, and at length Smith, having drawn upon himself the hatred of some violent man, who, like himself, knew no laws but his own passions, was shot dead in prison, and his brother was murdered at the same time.

It would be well for many if Smith’s falsehoods had died with him, but it was not so: his friends find it a profitable thing to keep up the delusion, and certainly they have hitherto acted with zeal in the cruel and unholy cause.

We will now compare a few leading points of Mormonite doctrine with the word of God.

1st. Mormonite preachers say they are sent by God.

The word of God says “Believe not every spirit, but try the spirits whether they are of God: because many false prophets are gone out into the world.” 1 John, ch. iv, v. 1. “Beware of false prophets which come to you in sheep’s clothing, but inwardly are ravening wolves. Ye shall know them by their fruits. Do men gather grapes of thorns and figs of thistles? Even so every good tree bringeth forth good fruit; but a corrupt tree bringeth forth evil fruit.” Matt. ch. v, v. 17, 18.

We are not to believe a man simply because he says he is sent by God, but we are bound to try his life and his doctrine by the unerring word of God. See Acts, ch. xvii. v. 10, 12.

When we see them do so, it will be quite time enough to take notice of this claim; but I would just observe, in passing, that even a miracle is not to convince us, if the man who works it speaks contrary to the word of God. Matt. ch. xxiv. v. 24, 25.

3rd. They assert that the Bible is much altered, and consequently imperfect, and that the Book of Mormon is perfect.

It is, of course, easy to make such a statement as this, but can they prove what they say?

It has always been Satan’s [2] aim to bring the Scriptures into contempt. But He who gave the Bible to man by His Spirit, has preserved it by His power. He gave the word for our use, for the Apostle says “Whatsoever things were written aforetime were written for our learning; that we, through the comfort of the scriptures might have hope.” He keeps it by his power, for the Lord Jesus Christ himself has said “Think not that I am come to destroy the law or the prophets; I am not come to destroy but to fulfil, for verily I say unto you till heaven and earth pass, one jot or one tittle shall in no wise pass from the law, until all be fulfilled.” Matt. ch. v., v. 17, 18.

As for the “Book of Mormon,” it consists of about 580 pages of trash quite unworthy of notice. The writer endeavours to imitate the style of scripture but fails altogether. Passages of scripture, even whole chapters of Isaiah, are put in here and there in order to catch the eye of the unwary.

4th. They teach that it is not faith alone in the Lord Jesus which saves the soul, but that works and baptism are of equal efficacy in the work of salvation.

The Apostle says, “By grace are ye saved through faith; and that not of yourselves: it is the gift of God: not of works lest any man should boast.” Eph. ch. ii. v, 8, 9. We were poor lost sinners, Jesus came down to die for us, He arose triumphant from the tomb, He is now in heaven at the right hand of God, and the Holy Ghost points to him as the lamb of God whose blood cleanses from all sin. The work of salvation is His and His alone. It is God’s will, surely, that his people should walk in good works, but to walk in them and to be saved by them are different things. God takes all boasting from us, but, “by what law? of works? Nay; but by the law of faith.” Rom. c. iii.

5th. They tell you that the judgments of God are coming upon the earth, and that America is the place of safety.

The first part of this statement is true, the second part is a lie of the devil’s. God’s judgments are indeed coming; but America will be no place of safety in the “great and dreadful Day of the Lord.”

“For Behold the Lord cometh out of his place to punish the inhabitants of the earth for their iniquity.” He shall come in the person of Jesus.—Jesus the incarnate God.—Jesus the [3] rejected king,—rejected and crucified in weakness once, but crowned with everlasting glory now. In flaming fire he shall come. He shall descend with the angels of his power. The might of man and the glory of the world shall crumble into dust and ashes before His face. 2 Thess. ch. i. v. 7—12.

And “then He shall sit upon the throne of His glory; and before him shall be gathered all nations; and he shall separate them one from another as a shepherd divideth his sheep from the goats.” Matt. ch. xxv. v. 31, 32. Who shall stand in that day? Will Joseph Smith’s baptism save his followers then? Will a man’s good works cover his iniquities then? Will America escape judgment in that Day of the Lord?

Some will escape, and who are they? “I beheld,” says John “and lo a great multitude, which no man could number, of all nations and kindreds, and peoples, and tongues, stood before the throne, and before the lamb, clothed with white robes and palms in their hands; And cried with a loud voice, saying, Salvation to our God, which sitteth upon the throne, and unto the Lamb. And all the angels stood about the throne, and about the elders and the four beasts, and fell before the throne on their faces, and worshipped God, saying, Amen: blessing, and glory, and wisdom, and thanksgiving, and honour, and might, be unto our God for ever and ever, Amen: And one of the elders answered, saying unto me, what are these which are arrayed in white robes? and whence came they? And I said unto him, Sir, thou knowest. And he said unto me, these are they which came out of great tribulation, and have washed their robes, and made them white in the BLOOD OF THE LAMB. Therefore are they before the throne of God, and serve him day and night in his temple: and he that sitteth on the throne shall dwell among them. They shall hunger no more, neither thirst any more, neither shall the sun light upon them, nor any heat.

For the Lamb, which is in the midst of the throne, shall feed them, and shall lead them unto living fountains of water: and God shall wipe away all tears from their eyes.” Rev. ch. vii, v. 9 to 17.