A Few Words of Warning from a Minister to his Flock 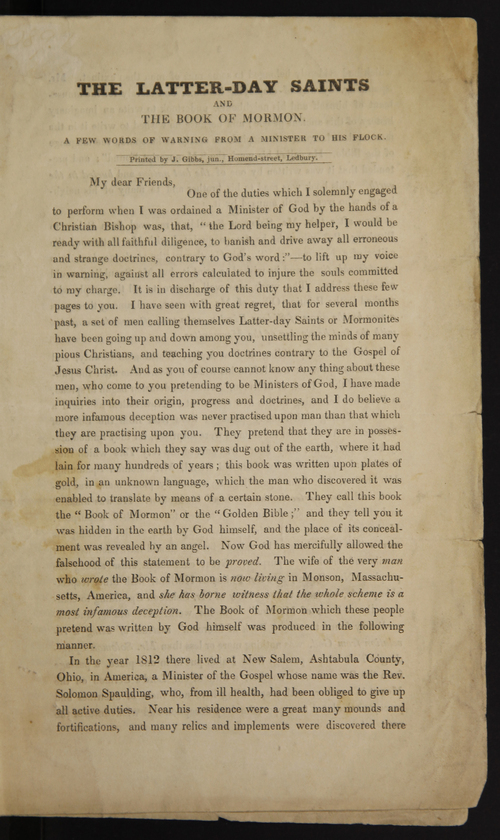 Morrish, W. J. The Latter-day Saints and the Book of Mormon. A Few Words of Warning

AND THE BOOK OF MORMON.

A FEW WORDS OF WARNING FROM A MINISTER TO HIS FLOCK.

One of the duties which I solemnly engaged to perform when I was ordained a Minister of God by the hands of a Christian Bishop was, that, “the Lord being my helper, I would be ready with all faithful diligence, to banish and drive away all erroneous and strange doctrines, contrary to God’s word:”—to lift up my voice in warning, against all errors calculated to injure the souls committed to my charge. It is in discharge of this duty that I address these few pages to you. I have seen with great regret, that for several months past, a set of men calling themselves Latter-day Saints or Mormonites have been going up and down among you, unsettling the minds of many pious Christians, and teaching you doctrines contrary to the Gospel of Jesus Christ. And as you of course cannot know any thing about these men, who come to you pretending to be Ministers of God, I have made inquiries into their origin, progress and doctrines, and I do believe a more infamous deception was never practised upon man than that which they are practising upon you. They pretend that they are in possession of a book which they say was dug out of the earth, where it had lain for many hundreds of years; this book was written upon plates of gold, in an unknown language, which the man who discovered it was enabled to translate by means of a certain stone. They call this book the “Book of Mormon” or the “Golden Bible;” and they tell you it was hidden in the earth by God himself, and the place of its concealment was revealed by an angel. Now God has mercifully allowed the falsehood of this statement to be proved. The wife of the very man who wrote the Book of Mormon is now living in Monson, Massachusetts, America, and she has borne witness that the whole scheme is a most infamous deception. The Book of Mormon which these people pretend was written by God himself was produced in the following manner.

In the year 1812 there lived at New Salem, Ashtabula County, Ohio, in America, a Minister of the Gospel whose name was the Rev. Solomon Spaulding, who, from ill health, had been obliged to give up all active duties. Near his residence were a great many mounds and fortifications, and many relics and implements were discovered there [1] which had evidently belonged to some race of men then extinct. Mr. Spaulding, by way of employing his time, and merely for the amusement of himself and his neighbours, undertook to write an imaginary history of this ancient people; and because he wished to write it in the most ancient language, he copied, as nearly as he could, the language of the Bible. He called his work the “Manuscript Found”; and pretended that it was written by one of the lost nation and buried in the earth. This book was read to his brother and to many of his neighbours, who were much amused by it.

Soon after this, Mr. Solomon Spaulding removed from Salem to Pittsburg, Pa., where he became acquainted with Mr. Patterson, the editor of a Newspaper. To this Gentleman the work was lent for a considerable time, and he wished to print it, but Mr. Spaulding would not allow him. The work was well known to all the people who worked in the Printing-Office of Mr. Patterson, and among these was a man by the name of Sidney Rigdon, who was afterwards connected with the first beginning of the Mormonites.

In 1816, Mr. Spaulding died at Amity, Washington County, and the Manuscript work was left to his widow. Some time after the publication of the “Book of Mormon,” when the delusion began to spread, a Preacher belonging to this new sect went to New Salem and held a meeting, during which many passages were read from the Book of Mormon. All the older inhabitants were surprised, for they immediately knew that what they heard was part of the very Tale which they had heard read so often by their old friend, Mr. Solomon Spaulding. His brother, Mr. John Spaulding, an eminently pious man, was present, and knew perfectly the work of his brother. He was amazed and afflicted that it should have been turned to so wicked a purpose. He burst into tears, and rising at once expressed to the meeting his sorrow that the writing of his sainted brother should have been used for so vile and shocking a purpose. Great excitement arose among the people at New Salem, and Dr. Philastus Hurlbut, with other respectable people, was sent to the widow of Mr. Solomon Spaulding to compare the “Book of Mormon” with his work. He did so, and immediately found that the “Book of Mormon” instead of being a revelation from God, was nothing more or less than Mr. Solomon Spaulding’s Tale with a passage from Isaiah put in in one place, a passage from the Revelations in another, a little of our Lord’s Sermon on the Mount in another, with a sprinkling here and there of doctrines and precepts calculated to support the deep deception and wickedness of the new sect. [2]

Such is the origin of the Book of Mormon as given by the wife of the very man who wrote it. Since his death she has married a second husband named Davidson. She now resides at Monson, Massachusetts, is a woman of irreproachable character and an humble Christian; and A. Ely, D. D., Pastor of the Congregational Church in Monson, and D. R. Austin, Principal of Monson Academy, both men of eminent piety and great learning, have borne witness that her testimony is worthy of full confidence.

Now, my dear Friends, I do beseech you to consider well this plain statement of truth, and thank God who has been pleased to discover such gross deception. If men begin by practising so infamous a cheat; if they come to you pretending to be ministers of God, telling you of dreams and revelations and visions of angels, and bringing with them a Book which they pretend was written by the finger of God and given to them by an Angel, while you are sure, upon good testimony, that the same was written by a poor weak mortal like yourselves, of course you know how little credit is due to them on any other point. What they tell you is founded upon a lie, and therefore cannot be true. Whether or not all those who go about teaching these mad doctrines are aware of the sinful deception, or whether they too are some of them deceived, I cannot pretend to say. I hope they have done these things in ignorance. I hope the knowledge of the fraud practised is confined only to the leaders. But however this may be, your duty is plain, to “come out from these wicked people and be separate.”

I have not said any thing to you about the doctrines taught in their books, because, when we know that the very book from which these doctrines are taken is a deception, we can but expect that the doctrines themselves are contrary to the Gospel. And so they are; though they have been too cunning to commit themselves by teaching a lie without some mixture of the truth as it is in Jesus.

Another strange thing which they teach you, is that you must leave this country and go to America, there to reign with Jesus Christ until this wicked part of the world is destroyed: and I am sorry to hear that many persons have been induced to sell their little property under this idea.

Now why this deception has been attempted I cannot certainly say; but there are reasons that almost lead me to suppose that there is some more worldly scheme than appears outwardly. I find that mention is made of some Land that has been bought on the shores of the Mississippi River in America; and, they tell you, “that “119,000 acres more may be purchased by a united effort of the “Saints. ” They tell you too “that Jesus Christ has declared that [3] “whosoever gives food or clothing or money to the Latter-day Saints, “shall be rewarded; and that he has commanded such money to be “sent to the Bishop in America, that it may be consecrated for the “establishment of Zion. ” Now 119,000 acres cannot be cultivated without hands; and it is more to the advantage of those who possess them to persuade poor people to sell their little all, under a religious delusion, and so pay for their own passage, than to be obliged to give a free passage to labourers from England, that they may go to America to cultivate their otherwise useless acres.

My dear Friends, I trust the plain truths I have put before you may have their due effect. If you know the Gospel you will not be surprised that such warnings should be necessary. St. Peter has declared that “false prophets shall arise who through covetousness with feigned “words shall make merchandise of you; despising government; pre- “sumptuous, self-willed, not afraid to speak evil of dignities; speak- “ing great swelling words of vanity.” And St. Paul warns us to expect those who “desiring to be teachers of the Law, understand neither “what they say or whereof they affirm; speaking lies in hypocrisy; “creeping into houses and leading captive silly women;” he has prophesied, that the time will come when “men will not endure sound “doctrine, but will heap to themselves teachers, having itching ears.” Knowing therefore that these things are but the confirmation of Scripture, go to Scripture for aid and direction. “Seeing ye know these things “before, beware lest ye also, being led away by the error of the wick- “ed, fall from your own steadfastness.” “Believe not every spirit; “but try the spirits, whether they are of God, because many false “Prophets are gone out into the world.” “Be not carried about with “divers and strange doctrines; for it is a good thing that the heart be “established with grace.”

May that God who is the giver of all wisdom grant you grace to “continue in the faith grounded and settled and not to be moved “away” by the gross delusions of religious impostors “from the hope “of the Gospel which ye have heard,”—Is the fervent prayer of

Your affectionate Pastor and Friend,