A Few Remarks by Way of Reply to an Anonymous Scribbler 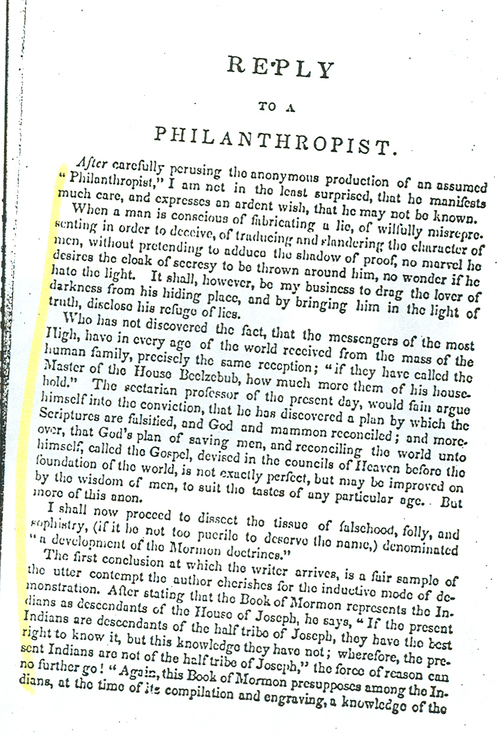 Bennett, S. A Few Remarks by way of reply to an anonymous scribbler, calling himself a philanthropist, disabusing the Church of Jesus Christ of Latter-day Saints of the slanders and falsehoods which he has attempted to fasten upon it, 1–4. Philadelphia, PA: Brown, Bicking & Guilpert, 1840. REPLY TO A PHILANTHROPIST.

After carefully perusing the anonymous production of an assumed “Philanthropist,” I am not in the least surprised, that he manifests much care, and expresses an ardent wish, that he may not be known.

When a man is conscious of fabricating a lie, of willfully misrepresenting in order to deceive, of traducing and slandering the character of men, without pretending to adduce the shadow of proof, no marvel he desires the cloak of secresy to be thrown around him, no wonder if he hate the light. It shall, however, be my business to drag the lover of darkness from his hiding place, and by bringing him in the light of truth, disclose his refuge of lies.

Who has not discovered the fact, that the messengers of the most High, have in every age of the world received from the mass of the human family, precisely the same reception; “if they have called the Master of the House Beelzebub, how much more them of his household.” The sectarian professor of the present day, would fain argue himself into the conviction, that he has discovered a plan by which the Scriptures are falsified, and God and mammon reconciled; and moreover, that God’s plan of saving men, and reconciling the world unto himself, called the Gospel, devised in the councils of Heaven before the foundation of the world, is not exactly perfect, but may be improved on by the wisdom of men, to suit the tastes of any particular age.

But more of this anon.

I shall now proceed to dissect the tissue of falsehood, folly, and sophistry, (if it be not puerile to deserve the name,) denominated “a development of the Mormon doctrines.”

The first conclusion at which the writer arrives, is a fair sample of the utter contempt the author cherishes for the inductive mode of demonstration. After stating that the Book of Mormon represents the Indians as descendants of the House of Joseph, he says, “If the present Indians are descendants of the half tribe of Joseph, they have the best right to know it, but this knowledge they have not; wherefore, the present Indians are not of the half tribe of Joseph,” the force of reason can no further go! “Again, this Book of Mormon presupposes among the Indians, at the time of its compilation and engraving, a knowledge of the [3] arts and sciences in order to sail across the atlantic ocean,—navigation, reading, writing, engraving, goldbeating, &c., but the present race of Indians have no recollection or tradition of reading or writing ever being among them; wherefore, the Book of Mormon, or the golden plates was not made and engraved by the Indians.” How blindly infatuated must that man be, and how willing withal to believe a lie that he might be damned, who can find no better reason for rejecting the Book of Mormon, as a true record, than those above stated. But these objections exist no where but in the writer’s shallow brain. Any one who has the slightest acquaintance with American antiquities, or Indian traditions, will find abundant evidence to establish the fact. (See Priest’s American Antiquities, also a work on the discovery of America, by the Northmen, by A. Davis.)

The authenticity of the Book of Mormon, rests exactly upon the same foundation that the communications of the Almighty to the human family ever have rested, in any age of the world; viz. the testimony of men, whose honesty and veracity have never been falsified, and who have not counted their lives dear unto them, but were ever ready to seal their testimony with their blood. [4] . . .