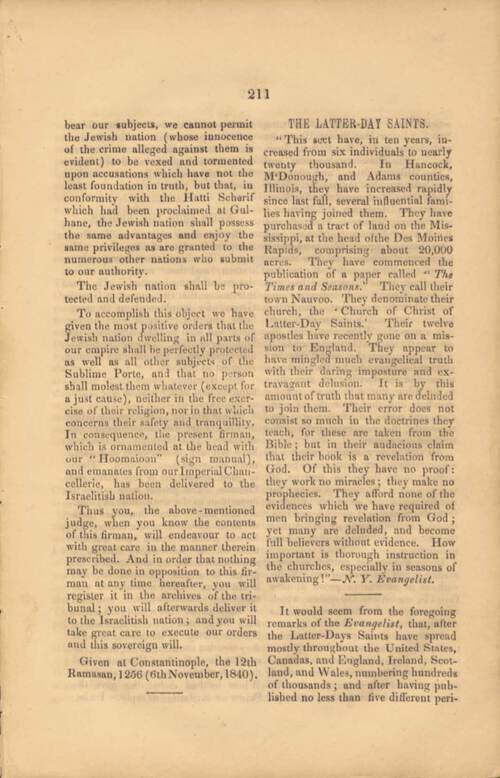 “This sect have, in ten years, increased from six individuals to nearly twenty thousand. In Hancock, McDonough, and Adams counties, Illinois, they have increased rapidly since last fall, several influential families having joined them. They have purchased a tract of land on the Mississippi, at the head ofthe Des Moines Rapids, comprising about 20,000 acres. They have commenced the publication of a paper called “The Times and Seasons.” They call their town Nauvoo. They denominate their church, the ‘Church of Christ of Latter-Day Saints.’ Their twelve apostles have recently gone on a mission to England. They appear to have mingled much evangelical truth with their daring imposture and extravagant delusion. It is by this amount of truth that many are deluded to join them. Their error does not consist so much in the doctrines they teach, for these are taken from the Bible; but in their audacious claim that their book is a revelation from God. Of this they have no proof: they work no miracles; they make no prophecies. They afford none of the evidences which we have required of men bringing revelation from God; yet many are deluded, and become full believers without evidence. How important is thorough instruction in the churches, especially in seasons of awakening!”— N. Y. Evangelist.

It would seem from the foregoing remarks of the Evangelist, that, after the Latter-Days Saints have spread mostly throughout the United States, Canadas, and England, Ireland, Scotland, and Wales, numbering hundreds of thousands; and after having published no less than five different peri- [211] odicals, viz.: “Evening and Morning Star,” “Latter-Day Saints’ Messenger and Advocate,” “The Elders’ Journal,” “The Times and Seasons,” and “The Millennial Star;” and after having built up nine towns, viz.: Kirtland, (Ohio,) Independence, FarWest, Dewitt and Divahman, (of Missouri,) and Nauvoo, Montrose, Nashville,and Keokuk, of Illinois and Ioway, and after having spread their settlements for scores of miles around these towns; I say it would seem after all this, that the editor of the evangelist has just awaked from along lethargy, and found that the sect exists—that it has built a town, and commenced to publish a paper! What wonderful discoveries the learnedEditor has made!!!

Having given the world this important information, he then informs them that our doctries are according to the Bible, but still we are awfully deluded, and that we work no miracles, and make no prophesies,—consequently, that we give no proof of the truth of our system.

All this is very strange indeed: in acknowledging our doctrines to be according to the Bible, he destroys all other modern religious systems; for our doctrines are as widely different from the doctrines of all modern Christendom, as the heavens are higher than the earth, or as noonday differs from midnight.

If the Evangelist cannot believe a system which is according to the Bible, without a miracle to prove it, how then can we believe his system, which is contrary to the bible, and still he works no miracles to prove it?

Surely his words are true, in relation to the importance of thorough instruction. It would take much instruction indeed to cause the human mind to reject a Bible doctrine for want of miracles, and to embrace an unscriptural system like that which the Evangelist supports, while at the same time the Editor and his followers work no miracles and give no evidence either from scripture, or from any other source.