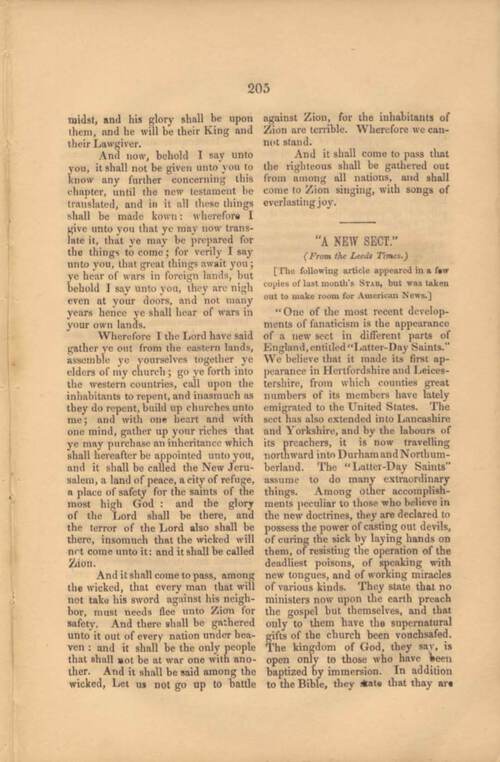 ( From the Leeds Times.)

[The following article appeared in a few copies of last month’s STAR, but was taken out to make room for American News.]

“One of the most recent developments of fanaticism is the appearance of a new sect in different parts of England, entitled “Latter-Day Saints.” We believe that it made its first appearance in Hertfordshire and Leicestershire, from which counties great numbers of its members have lately emigrated to the United States. The sect has also extended into Lancashire and Yorkshire, and by the labours of its preachers, it is now travelling northward into Durham and Northumberland. The “Latter-Day Saints” assume to do many extraordinary things. Among other accomplishments peculiar to those who believe in the new doctrines, they are declared to possess the power of casting out devils, of curing the sick by laying hands on them, of resisting the operation of the deadliest poisons, of speaking with new tongues, and of working miracles of various kinds. They state that no ministers now upon the earth preach the gospel but themselves, and that only to them have the supernatural gifts of the church been vouchsafed. The kingdom of God, they say, is open only to those who have been baptized by immersion. In addition to the Bible, they state that thay are [205] in possession of another work of equal authority, entitled “The Book of Mormon,” the original of which was found engraved in brass plates in teh central land of America. Finally, they consider this is the last generation of mankind, and that they have been sent into the world expressly on purpose to prepare the way for the Son of Man.”

I see nothing of the appearance of fanaticism in the doctrines described in the foregoing article, except that part of it which is not true.

The statement concerning no minister preaching the gospel but the Latter-Day Saints, is incorrect. The Latter-Day Saints judge no man, they simply state what the gospel is, as taught by the apostles, and then declare that those who teach differently from the Apostle do not preach the gospel, and then leave the world to judge for themselves how far to make the application.

Neither do the Saints hold “that this is the last generation of mankind.” So far from this we consider that men will multiply during the Millennium, and after Christ comes.

It is true, the Latter-Day Saints have a mission to prepare the way for the second advent of Messiah, by preaching the baptism of repentance for the remission of sins.