Public Discussion on the Isle of Man 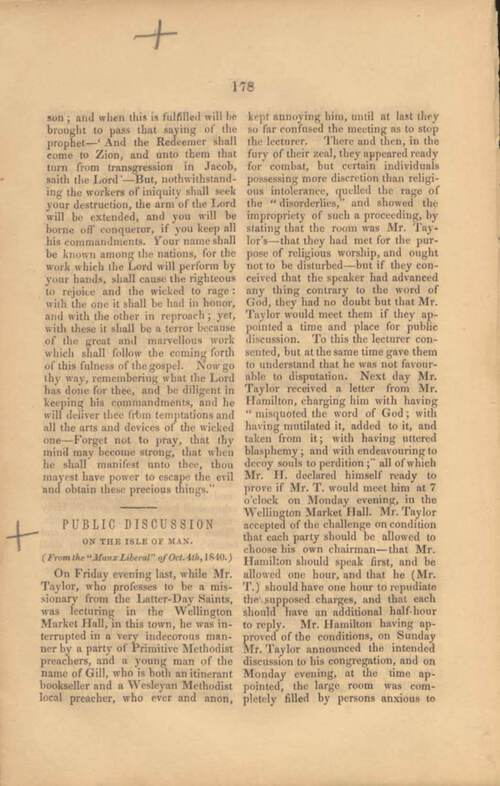 PUBLIC DISCUSSION ON THE ISLE OF MAN.

On Friday evening last, while Mr. Taylor, who professes to be a missionary from the Latter-Day Saints, was lecturing in the Wellington Market Hall, in this town, he was interrupted in a very indecorous manner by a party of Primitive Methodist preachers, and a young man of the name of Gill, who is both an itinerant bookseller and a Wesleyan Methodist local preacher, who ever and anon, kept annoying him, until at last they so far confused the meeting as to stop the lecturer. There and then, in the fury of their zeal, they appeared ready for combat, but certain individuals possessing more discretion than religious intolerance, quelled the rage of the “disorderlies,” and showed the impropriety of such a proceeding, by stating that the room was Mr. Taylor’s—that they had met for the purpose of religious worship, and ought not to be disturbed-but if they conceived that the speaker had advanced any thing contrary to the word of God, they had not doubt but that Mr. Taylor would meet them if they appointed a time and place for public discussion. To this the lecturer consented, but at the same time gave them to understand that he was not favourable to disputation. Next day Mr. Taylor received a letter from Mr. Hamilton, charging him with having “misquoted the word of God; with having mutilated it, added to it, and taken from it; with having uttered blasphemy; and with endeavouring to decoy souls to perdition;” all of which Mr. H. declared himself ready to prove if Mr. T. would meet him at 7 o’clock on Monday evening, in the Wellington Market Hall. Mr. Taylor accepted of the challenge on condition that each party should be allowed to choose his own chairman—that Mr. Hamilton should speak first, and be allowed one hour, and that he (Mr. T.) should have one hour to repudiate the supposed charges, and that each should have an additional half-hour to reply.

Mr. Hamilton having approved of the conditions, on Sunday Mr. Taylor announced the intended discussion to his congregation, and on Monday evening, at the time appointed, the large room was completely filled by persons anxious to [178] witness the coming conflict betwixt the two champions.

All preliminaries being over and chairman chosen, Mr. H. was called to defend his charges. He instantly rose and commenced his harangue by shewing what a clever fellow he had been, what he had done, and by inference, what he was still able to do. He said that he once took part in a similar discussion, and so effectual were the weapons of his oratory that his antagonist died within three days, and that on a subsequent occasion he was equally successful. This, as might be expected, raised some excitement in the meeting, and created some alarm for the safety of his opponent, who seemed domed to fall beneath the fatal influence of his death-striking logic.—But as he proceeded it soon became apparent that he was a mere braggadocia, possessing no qualifications save ignorance and presumption. His countenance void of every trace of intelligence—his common-place expressions abounding with tautology—the stiffness of his attitude—the inaccuracy of his language and the monotony of his tone—all indicated his utter inability to effect his purpose, so that the missionary had nothing to fear from the inoffensive weapons of the harmless Hamilton. However, he managed to occupy his hour in the delivery of one of his favourite sermons on the origin, nature, and design of the gospel, but made not even the most distant allusion in reference to the gross and unfounded charges he had pledged himself to prove.

Mr. T. being called, rose, and expressed his surprise that no proof of the charges laid against him had been attempted; but as he was allowed an hour, he would have to imitate the example of his friend, and preach too. His opponent had said much about the gospel; he too believed it to be the “power of God unto salvation to every one that believeth;” but it was the gospel of Jesus Christ, and not a part but the whole of the gospel. Mention had been made of different sections of the church; he did not believe that the church of Christ was divided into sections. The Holy Spirit did not inspire one party with one opinion and another party with another opinion; God was not the author of confusion; there was one God, one faith, and one baptism. All the different sections of the church, as they were called, originated in the observance of the opinions of men rather than the Word of Eternal Truth. As the gospel was unchangeable, and its Author no respecter of persons, the church at the present day ought to be the same, with regard to its offices, gifts, and privileges, as in the apostolic age. Mr. T. having strenuously defended the above sentiments, then turned to Mr. H. and contended that the section to which he (Mr. H.) belonged was not established on apostolic principles, and that its ministers were not called according to the ordinance of God.

Mr. Hamilton again rose, but utterly failed in his attempt to grapple with the arguments of his opponent.—Although a perfect stranger to the syntax of his mother tongue, he most pedantically boasted of his acquaintance with Greek! He said he had with him a Greek Testament, and that in it he could find a word called BAPTO—that it signified to overwhelm, and that to overwhelm, as every body knew, signified to sprinkle with the hand!! He said that baptism was performed in different ways under different circumstances,—that in countries where there was little water they dipped their fingers in a little cup, [179] and that in countries where there was no water they baptised with oil!!! All this he said he was able to state on account of his great intimacy with history, a knowledge of which, he considered as necessary to a christian as a knowledge of the gospel itself!!!!

Mr. Taylor again rose, not to defend his principles, for they had not been attacked, but, as soon appeared, to inflict deserved chastisement on the arrogant simpleton, who had given the challenge without being able to utter a single sentence against his opponent; and this he did right well, for while poor Mr. Hamilton writhed beneath his heavy flagellation, it was truly heart-rending to witness his (Mr. H.’s) agony. There he sat biting his lips, and shaking his head, and every muscle of his distorted countenance seemed to implore the mercy of the meeting. Mr. T. concluded his speech by affectionately exhorting Mr. H. to repent and be baptised for the remission of sins, and them to enter by the door into the sheep-fold.

The time agreed to for the discussion having expired, the following motion was about to be put to the meeting—“Resolved—That as Mr. Hamilton has neither proved, nor attempted to prove, any of the charges made by him against Mr. Taylor, this meeting believes that they are all utterly false, and consequently indefensible.” This motion, had it been put, would have been carried by an overwhelming majority. But this was not permitted, for at that moment Mr. Gill, the chairman for Mr. H., sprang on his feet, and dancing mad, “half sung, have screamed,” to the following effect:—“As I have been implicated as one of the offenders on Friday evening last, I have a right to vindicate my conduct. We met here to discuss certain topics, but precious little has been said. It was I who wrote the letter charging him with having mutilated the word of God, with having added to it and taken from it, with having uttered blasphemy, and with having laboured to decoy souls to perdition, and I can prove it! and I can prove it! and I can prove it!”

Here his voice was drowned by cries from all parts of the room of “shame, shame”—“put him down”—“put him out,” mingled with hisses and groans. The tumult having subsided, he made an attempt to give out the doxology, when “no! no!” from a hundred voiced assailed his ears. Then Mr. Taylor, who had conducted himself during the meeting both as a gentleman and a christian, gave out the doxology, and concluded with prayer, after which the meeting quietly dispersed.