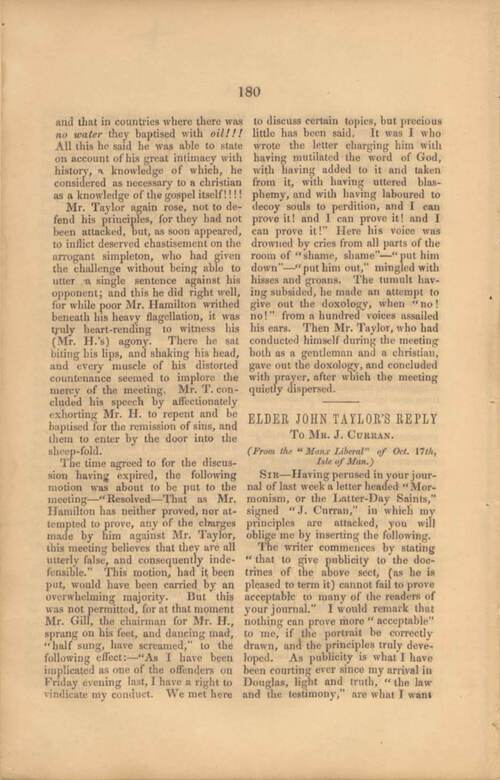 SIR─Having perused in your journal of last week a letter headed “Mormonism, or the Latter-Day Saints,” signed “J. Curran,” in which my principles are attacked, you will oblige me by inserting the following.

The writer commences by stating “that to give publicity to the doctrines of the above sect, (as he is pleased to term it) cannot fail to prove acceptable to many of the readers of your journal.” I would remark that nothing can prove more “acceptable” to me, if the portrait be correctly drawn, and the principles truly developed. As publicity is what I have been courting ever since my arrival in Douglas, light and truth, “the law and the testimony,” are what I want [180] to have my principles tried by, and not by the creeds and opinions of men. If Dr. C. will do this fairly, he will only accelerate the advancement of truth, which is already progressing with rapid strides. The public have been apprised of my anxiety for this, for when the Rev. Robert Heys, Wesleyan Minister of this town, published certain falsehoods, I published a reply in pamphlet form, in which I challenged him to an investigation and of those principles before the public, and stated that the “Book of Mormon” should be the subject of discussion, and that the doctrines contained in it should be tested by the Word of God. This reply, through the favour of the proprietors, will be found in this week’s Liberal.

The prefaratory remarks of my latter antagonist I shall just touch upon. He introduces the Koran as an example of the Book of Mormon, and states that there are in it “the grandest and most sublime truths respecting God and his attributes; and this, he adds, “is exactly the character of the Book of Mormon, which is put forth by the Latter-Day Saints as given by inspiration: it is written apparently in imitation of the Scriptures where the historic is combined with what is strictly doctrinal and didactic.” The great evil then is, that it is like the Scriptures─that it is strictly doctrinal &c. “If they speak not according to this word, it is because there is no light in them.”─Isaiah viii. 20. But he says that they are “mixed up with all sorts of fictions.” Perhaps we shall be favoured with some of them in his next communication. I perceive that the terms “delusion” and “error,” are favourite terms with him, as well as with some of the rev. gentlemen of this town with whom I have had to do. He complains that “never at any period has pure religion been revived, or anything God-like made its appearance upon the earth, but Satan has opposed it.” I would here ask has anything God-like recently made its appearance on the earth? or has pure religion lately been revived? Let the Doctor himself reply; these are his own words─“Now when we consider the unhealthy state of the professed Church, &c.;”─and in a communication to me, he observes in reference to the present state of the Church, that it is “UNHEALTHY, CORRUPT, and IGNORANT.” It appears to me no other inference can be drawn from his reasoning than this─pure religion has been revived, something God-like has made its appearance upon the earth, but this God-like pure religion is corrupt, unhealthy, and ignorant! Is this consistency?─this the reasoning of a man who has come forth as the champion of truth, alias sectarianism? However incorrect the Doctor’s reasoning may appear, I certainly must admit the accuracy of his first statement, “ That never at any period has pure religion been revived, or anything God-like made its appearance on the earth, but Satan has opposed it through the many instruments under his controul,” or “ the god of this world” would not have found so many to assist the Doctor at this time. He refers his readers to 1st Tim. iv. 1. “Now the Spirit speaketh expressly that in the latter times some shall depart from the faith;” but the Doctor has not said what faith. Is it to the faith of the Methodists, the Universalists, the Presbyterians, the Roman Catholics, the Quakers, or to the faith of the Doctor himself, that Paul refers? The Apostle says, “Though we, or an Angel from heaven, preach any other gospel to you than that which we have [181] preached unto you, let him be accursed.”─Gal. i. 8. But the apostle never says anything about Methodism, Presbyterianism, &c. If the Doctor alludes to the faith which Paul preached, I most unequivocally state that I believe the whole of it, and “contend earnestly for the faith that was once delivered to the saints,” and that is the reason why I meet with so much opposition. In looking over his letter, however, I find that it is not to the apostle’s faith he refers, for one great crime among the many that he has to lay to our charge is, that we have got a new apostolate; from which I infer that he does not believe in the order that God left in the Church, viz.,─apostles, prophets, pastors, teachers, all of whom were inspired men. I shall esteem it as a great favour, if he will undertake to show in his next, when the Lord altered the religion of the New Testament, and where it is mentioned in the Word of God that these offices are to be dispensed with.

The Doctor goes on to state that “these men pretended to have received from an angel of God the Book of Mormon.” “These men” never pretended to have received any such thing from an “angel of God.” “These men” had a revelation from an “angel of God,” but never pretended to have received the Book of Mormon from that source. If all communications from heaven are only “pretended” revelations, then Gideon pretended to have had a revelation from an angel of God, Manoah made the same pretension, Moses was guilty of the same thing; as also Abraham, Jacob, Daniel, Zachariah, Mary, Peter, Paul, John, and many others. It is rather surprising the Doctor does not call them all impostors for making such pretensions; but I suppose that if he had been cotemporary with them they would have shared the same fate, for all the prophets and apostles were persecuted─“they wandered about in sheep-skins and goat-skins, being destitute, afflicted, tormented.” And why? Because they were considered impostors. Why was our Saviour crucified? Because the priests and pharisees said he blasphemed and had a devil; and they thought they were performing a very pious act in crucifying him. Why was Stephen stoned and Paul imprisoned and scourged ? Because some thought they were deceivers, testifying to things which were false.

One crooked piece of work he thinks is manifested in the Lord giving a revelation to frustrate the designs of wicked men, who had stolen some of Joseph Smith’s writings, and had it in their hearts to alter the words which were written. I suppose he thinks it was impossible for a man who was a thief to alter the writing, or tell a lie! If he had the thief’s document, he would doubtless think it quite sufficient to refute the other if it did not agree with it. But perhaps he had a pious intention in stealing it, and it might palliate his crime if he turned thief, in order to detect imposture; but if he was a pious thief he might also be a pious liar, and I would at any time rather have to do with a wicked liar than with a pious one. I cannot perceive anything like evil in the circumstance alluded to by the Doctor; if he perceives anything of the kind, it must have originated in his own breast. I would, therefore, remind him of the old motto─“Evil be to him that evil thinks.” That men have wickedly and designedly altered the writings of others I am fully prepared to show;─that Mr. Heys has introduced into his pamphlet words which he cannot substantiate [182] is evident, and perhaps I shall be able to point out other alterations before we get through.