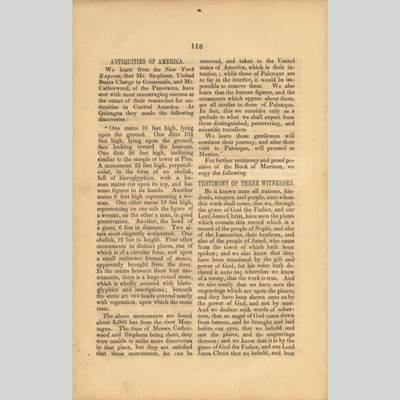 We learn from the New York Express, that Mr. Stephens, United States Charge to Guatemala, and Mr. Catherwood, of the Panorama, have met with most encouraging success at the outset of their researches for antiquities in Central America. At Quiragua they made the following discoveries:

“One statue 10 feet high, lying upon the ground. One ditto 10 ½ feet high, lying upon the ground, face looking toward the heavens. One ditto 26 feet high, inclining similar to the steeple or tower at Pisa. A monument 23 feet high, perpendicular, in the form of an obelisk, full of hieroglyphics, with a human statue cut upon its top, and has some figures in its hands. Another statue 9 feet high representing a woman. One other statue 19 feet high, representing on one side the figure of a woman, on the other a man, in good preservation. Another, the head of a giant, 6 feet in diameter. Two altars most elegantly sculptured. One obelisk, 12 feet in height. Four other monuments in distinct places, one of which is of a circular form, and upon a small eminence formed of stones, apparently brought from the river. In the centre between these four monuments, there is a huge round stone, which is wholly covered with hieroglyphics and inscriptions; beneath the stone are two heads covered nearly with vegetation, upon which the stone rests.

The above monuments are found about 3,000 feet from the river Montagua. The time of Messrs.

Catherwood and Stephens being short, they were unable to make more discoveries in that place, but they are satisfied that these monuments, &c. can be removed, and taken to the United states of America, which is their intention; while those of Palenque are so far in the interior, it would be impossible to remove them. We also learn that the human figures, and the ornaments which appear about them, are all similar to those of Palenque. In fact, this we consider only as a prelude to what we shall expect from these distinguished, persevering, and scientific travellers.

We learn these gentlemen will continue their journey, and after their visit to Palenque, will proceed to Mexico.”

For further testimony and proof positive of the Book of Mormon, we copy the following