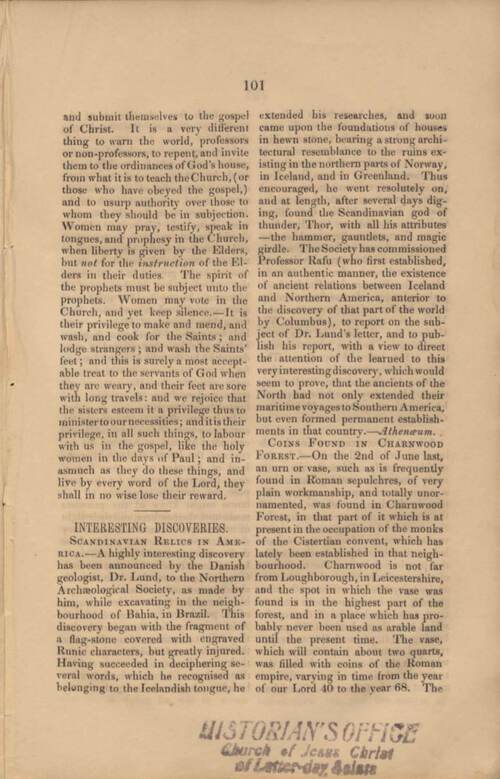 SCANDINAVIAN RELICS IN AMERICA.—A highly interesting discovery has been announced by the Danish geologist, Dr. Lund, to the Northern Archaeological Society, as made by him, while excavating in the neighbourhood of Bahia, in Brazil. This discovery began with the fragment of a flag-stone covered with engraved Runic characters, but greatly injured. Having succeeded in deciphering several words, which he recognised as belonging to the Icelandish tongue, he extended his researches, and soon came upon the foundations of houses in hewn stone, bearing a strong architectural resemblance to the ruins existing in the northern parts of Norway, in Iceland, and in Greenland. Thus encouraged, he went resolutely on, and at length, after several days digging, found the Scandinavian god of thunder, Thor, with all his attributes—the hammer, gauntlets, and magic girdle. The Society has commissioned Professor Rafu (who first established, in an authentic manner, the existence of ancient relations between Iceland and Northern America, anterior to the discovery of that part of the world by Columbus), to report on the subject of Dr. Lund’s letter, and to publish his report, with a view to direct the attention of the learned to this very interesting discovery, which would seem to prove, that the ancients of the North had not only extended their maritime voyages to Southern America, but even formed permanent establishments in that country.— Athenæum.

COINS FOUND IN CHARNWOOD FOREST.—On the 2nd of June last, an urn or vase, such as is frequently found in Roman sepulchres, of very plain workmanship, and totally unornamented, was found in Charnwood Forest, in that part of it which is at present in the occupation of the monks of the Cistertian convent, which has lately been established in that neighbourhood.

Charnwood is not far from Loughborough, in Leicestershire, and the spot in which the vase was found is in the highest part of the forest, and in a place which has probably never been used as arable land until the present time. The vase, which will contain about two quarts, was filled with coins of the Roman empire, varying in time from the year of our Lord 40 to the year 68. The [101] coins that have been taken indiscriminately from the mass in the vase are of a base metal; they are white when cleaned from the incrustation of rust and corrosion, and in good preservation. On the obverse they bear the heads of various emperors and sons of emperors, with the legends, Marius, Probus, Philip, Quintillius, Gallienus, Salonioa, Claudius Gothicus, Victorinus, &c.; and on the reverse are figures of Venus, Fortuna, &c. The vase has probably been in the ground since the year 426, in which the Romans left England, or perhaps longer. It was discovered by a lay brother of the convent, John McDonell, and two labourers, W. Hickey and C. Lott, as they were ploughing. The vase was not more than a foot below the surface. The vase and its contents are now on view at Mr. Abraham’s, No. 8, Burtonstreet, where they have been inspected by several antiquaries.— Manchester Guardian.

All such discoveries are hailed with interest, and readily believed by the world generally, although the testimony thereof be nothing more than a common newspaper report. To none is the discovery of the relics of the ancients more interesting than the Saints of the Last Days, and the remnants of scattered Israel; and we are led to inquire why it is, that while the people can receive the testimony of an anonymous paper alone, that an ancient city has been discovered under ground, and coins have been resuscitated from the bowels of the earth, which have been buried 1400 years, bearing the impress of Roman emperors and statesmen, in perfect form,—why is it that they cannot believe the testimony of living witnesses that an ancient record of the truth of God has come forth from the bowels of the earth to enlighten the inhabitants thereof?

Is it any more wonderful that the golden records which were hid in the earth by Moroni, according to the commandment of God, should be preserved entire, and come forth in the 19th century, than that the base metalic coins of Charnwood Forest should remain in good preservation, and come forth in the same period of time; or that a city should be discovered under ground in South America, which is but another proof of Mormon’s history? We think not; and especially when we reflect that the golden records of Mormon were hid by express Revelation from on high; while the coins referred to, were deposited by the will of man alone, so far as we have any knowledge, or mere accident, and the city, as appears evident from its location, was buried by judgments.

Is it any thing more wonderful, curious. or incredible, that God should command Moroni to hide up the records of the house of Joseph, in the land of America, in a stone box or cave, prepared expressly for that purpose, so that the remnants of that house might know of the promises made unto their fathers, and their right of inheritance in that land, when they should repent and turn again from their captivity, from being trod down by little and little by the feet of their Gentile oppressors, than it is that He should command Jeremiah to put or hide the sealed and unsealed evidence of the purchase of a piece of land in Asia “into an earthen vessel, that they might continue many days,” so that the house of Judah might know their own lands, even those which they had received of their fathers or bought with their money, when they [102] should return from their captivity at Babylon, whither they had been driven for their wickedness, (see Jer. xxxii. chap, &c.) just as the descendants of Joseph have been driven and trodden down for their iniquities in the land of America? No, it is not: and, as the God of Abraham, and of Isaac, and of Jacob, was a God of Revelation to Judah, so he was a God of Revelation to Joseph, and to the whole house of Israel, for he is no respecter of persons to his covenant people ; and when Judah shall return to his pleasant pastures, to his inheritance in Palestine, Joseph also shall return to his land, which was promised him by his father Jacob, (Gen. xlix. 22─26,) and dwell in peace, sitting under his own vine, and eating his own precious fruits promised him by Moses, (Deut. xxxiii. 13─17,) and which was confirmed by the mouth of the Lord unto Lehi, (1st chap.); and we testify unto the world that the Book of Mormon is true, and the Bible also, although few believe and less practice it.