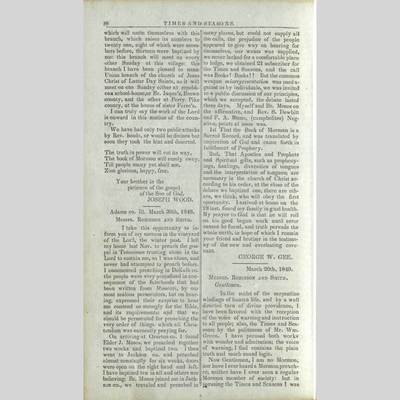 I take this opportunity to inform you of my success in the vineyard of the Lord, the winter past. I left my home last Nov. to preach the gospel in Tennessee trusting alone in the Lord to sustain me, as I was alone, and never had attempted to preach before. I commenced preaching in DeKalb co. the people were very prejudiced in consequence of the falsehoods that had been written from Missouri, by our most zealous persecutors, but on hearing, expressed their surprise to hear me contend so strongly for the Bible, and its requirements; and that we should be persecuted for preaching the very order of things which all Christendom was earnestly praying for.

On arriving at Overton co. I found Elder J. Moses, we preached together for two weeks and baptized two. I then went to Jackson co. and preached almost constantly for six weeks, doors were open on the right hand and left. I have baptized ten in all and others are believing; Br. Moses joined me in Jackson co., we traveled and preached in many places, but could not supply all the calls, the prejudice of the people appeared to give way on hearing for themselves, our wants was supplied, we never lacked for a comfortable place to lodge, we obtained 21 subscriber for the Times and Seasons, and the call was Books! Books!! But the common weapon misrepresentation was used against us by individuals, we was invited to a public discussion of our principles, which we accepted, the debate lasted three days. Myself and Br. Moses on the affirmative, and Rev. S. Dewhitt and F. A. Stone, (campbelites) Negative, points at issue was.

1st That the Book of Morman is a Sacred Record, and was translated by inspiration of God and came forth in fulfillment of Prophecy.

2nd, That Apostles and Prophets and Spiritual gifts, such as prophecyings, healings, diversities of tongues and the interpretation of tongues; are necessary in the church of Christ according to his order, at the close of the debate we baptized one, there are others, we think, who will obey the first opportunity. I arrived at home on the 28 inst. found my family in health. My prayer to God is that he will roll on his good begun work until error cannot be found, and the truth pervade the whole earth, in hope of which I remain your friend and brother in the testimony of the new and everlasting covenant.