To the Citizens of Washington 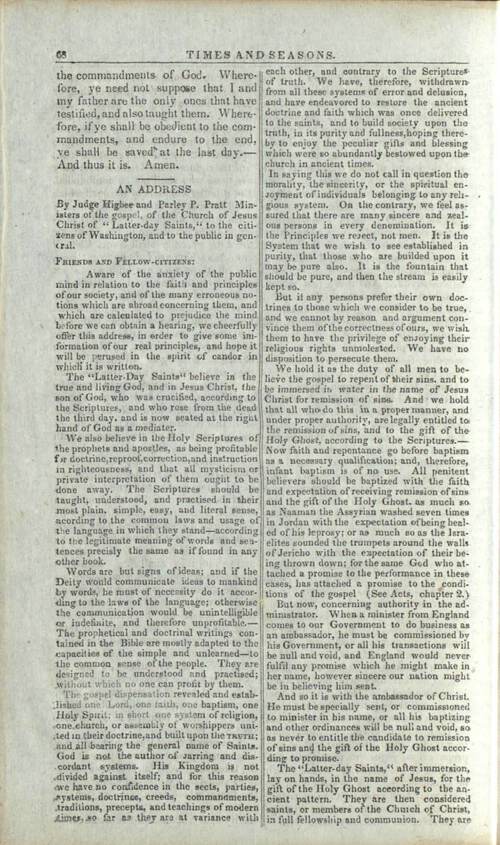 “An Address: by Judge Higbee and Parley P. Pratt Ministers of the Gospel, of the Churchof Jesus Christ of ‘Latter-day Saints,’ to the Citizens of Washington, and to the Public inGeneral.” Times and Seasons (Commerce, Illinois) 1, no. 5 (March 1840): 69.

. . . Having given this brief sketch of our faith and principles thus far, the inquiry may arise whether we believe in any other writings or books besides the Bible? To which we reply in the affirmative; for, like all other Christians, we believe in every true book within our knowledge, whether on science, history, or religion. We have implicit confidence in the “Book of Mormon,” not, however, as a new Bible to exclude the old, as some have falsely represented. We consider the “Book of Mormon” as a historical and religious record, written in ancient times by a branch of the house of Israel, who peopled America, and from whom the Indians are descended.

The Book of Mormon corroborates and confirms the truth of the Scriptures, by showing that the same principles were revealed and enjoyed in a country and among a people far remote from the scenes where the Jewish bible was written.

Suppose a traveller should find in China, in the East Indies, or in America, or New Holland, an historical record, handed down for thousands of years, or deposited in their sacred archives, or among their sepulchral ruins, or their monuments of antiquity—and in this record should be found the principles of eternal truth, revealed to that nation, and agreeing with the revelation and principles contained in the Jewish records. Or suppose, for instance, when the ten tribes of Israel are discovered, preparatory to their return to Palestine, a record should be found among them, giving their history from the time they were carried captive by Salmanezer, King of Assyria, and this record should be interspersed with prophecies and doctrine, as revealed among them since their captivity. Would [3] it be any thing incredible or injurious in its nature, or any thing against the truths revealed in the Jewish records? Certainly not. So far from this, it would be hailed by every lover of truth as a most interesting and important discovery. Its light would be hailed as a new era in the history of the great events of modern times.

And similar in its nature is the Book of Mormon. It opens the events of ancient America.

It pours a flood of light upon the world on subjects before concealed—upon the history of a nation whose remnants have long since dwindled to insignificance in midnight darkness, and whose former greatness was lost in oblivion, or only known by the remains of cities, palaces, temples, aqueducts, monuments, towers, fortifications, unintelligible inscriptions, sepulchers, and bones. The slumber of ages has now been broken. The dark curtain of the past has been rolled up. The veil of obscurity has been removed as it regards the world called new. The ancient events of America now stand revealed in the broad light of history, as far back, at least, as the first peopling of the continent after the flood. This discovery will yet be hailed among all nations as among the most glorious events of the latter times, and as one of the principal means of overwhelming the earth with knowledge. But why, then, is it so much opposed and neglected at the present time? Why do prisoners groan in chains and martyrs bleed in its promulgation to the world?

Answer. Upon the same principle that a Messiah was crucified, a Stephen stoned, a James slain, a Paul beheaded, a Peter crucified, a John banished, a Rogers burned, a Columbus neglected, ridiculed, and envied, a Newton counted mad, and a Fulton laughed to scorn. In short, it is because THEY KNOW NOT WHAT IT IS. . . .