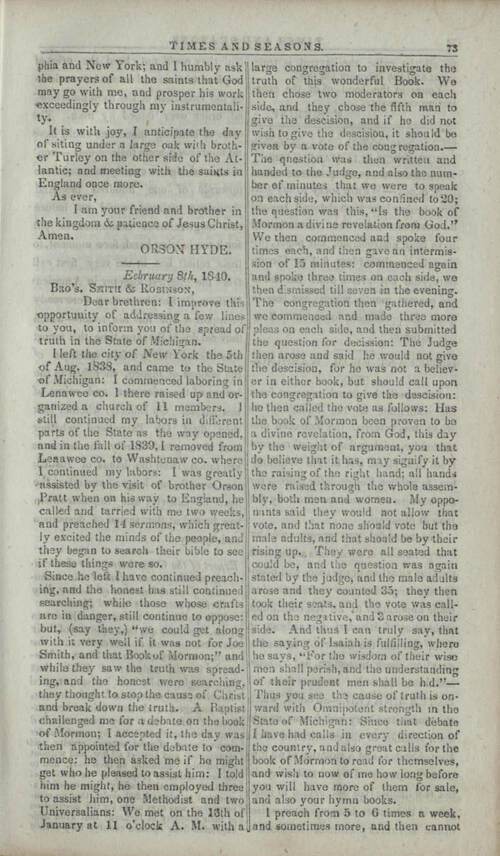 Dear brethren: I improve this opportunity of addressing a few lines to you, to inform you of the spread of truth in the State of Michigan.

I left the city of New York the 5th of Aug. 1838, and came to the State of Michigan: I commenced laboring in Lenawee co. I there raised up and organized a church of 11 members. I still continued my labors in different parts of the State as the way opened, and in the fall of 1839, I removed from Lenawee co. to Washtenaw co. where I continued my labors: I was greatly assisted by the visit of brother Orson Pratt when on his way to England, he called and tarried with me two weeks, and preached 14 sermons, which greatly excited the minds of the people, and they began to search their bible to see if these things were so.

Since he left I have continued preaching, and the honest has still continued searching; while those whose crafts are in danger, still continue to oppose: but, (say they,) “we could get along with it very well if it was not for Joe Smith, and that Book of Mormon” and while they saw the truth was spreading, and the honest were searching, they thought to stop the cause of Christ and break down the truth. A Baptist challenged me for a debate on the book of Mormon; I accepted it, the day was then appointed for the debate to commence: he then asked me if he might get who he pleased to assist him: I told him he might, he then employed three to assist him, one Methodist and two Universalians: We met on the 16th of January at 11 o’clock A. M. with a large congregation to investigate the truth of this wonderful Book. We then chose two moderators on each side, and they chose the fifth man to give the decision, and if he did not wish to give the decision, it should be given by a vote of the congregation.—The question was then written and handed to the Judge, and also the number of minutes that we were to speak on each side, which was confined to 20; the question was this, “Is the book of Mormon a divine revelation from God.” We then commenced and spoke four times each, and then gave an intermission of 15 minutes: commenced again and spoke three times on each side, we then dismissed till seven in the evening. The congregation then gathered, and we commenced and made three more pleas on each side, and then submitted the question for decision: The Judge then arose and said he would not give the decision, for he was not a believer in either book, but should call upon the congregation to give the decision: he then called the vote as follows: Has the book of Mormon been proven to be a divine revelation, from God, this day by the weight of argument, you that do believe that it has, may signify it by the raising of the right hand; all hands were raised through the whole assembly, both men and women. My opponents said they would not allow that vote. and that none should vote but the male adults, and that should be by their rising up. They were all seated that could be, and the question was again stated by the judge, and the male adults arose and they counted 35; they then took their seats, and the vote was called on the negative, and 3 arose on their side. And thus I can truly say, that the saying of Isaiah is fulfilling, where he says, “For the wisdom of their wise men shall perish, and the understanding of their prudent men shall be hid.”—Thus you see the cause of truth is onward with Omnipotent strength in the State of Michigan: Since that debate I have had calls in every direction of the country, and also great calls for the book of Mormon to read for themselves, and wish to now of me how long before you will have more of them for sale, and also your hymn books.

I preach from 5 to 6 times a week, and sometimes more, and then cannot [73] fill all the calls; the harvest is truly great and the laborers but few.

Yours in the bond of of the everlasting covenant.