The Mobbing Spirit of Missouri Rekindling in Illinois 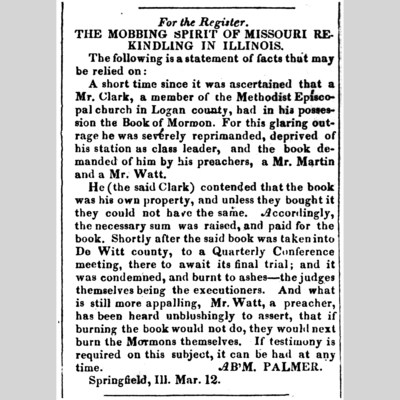 THE MOBBING SPIRIT OF MISSOURI RE-

The following is a statement of facts that may be relied on: A short time since it was ascertained that a Mr. Clark, a member of the Methodist Episcopal church in Logan county, had in his possession the Book of Mormon. For this glaring outrage he was severely reprimanded, deprived of his station as class leader, and the book demanded of him by his preachers, a Mr. Martin and a Mr. Watt.

He (the said Clark) contended that the book was his own property, and unless they bought it, they could not have the same. A ccordingly, the necessary sum was raised, and paid for the book. Shortly after the said book was taken into De Witt county, to a Quarterly Conference meeting, there to await its final trial; and it was condemned, and burnt to ashes—the judges themselves being the executioners. And what is still more appalling, Mr. Watt, a preacher, has been heard unblushingly to assert, that if burning the book would not do, they would next burn the Mormons themselves. If testimony is required on this subject, it can be had at any time.