For the Christian Advocate and Journal 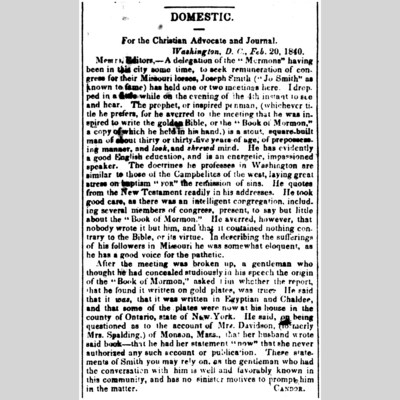 Messrs. Editors,—A delegation of the “Mormons” having been in this city some time, to seek remuneration of congress for their Missouri losses, Joseph Smith (“Jo Smith” as known to fame) has held one or two meetings here. I dropped in a little while on the evening of the 4th instant to see and hear. The prophet, or inspired penman, (whichever title he prefers, for he averred to the meeting that he was inspired to write the golden Bible, or the “Book of Mormon,” a copy of which he held in his hand,) is a stout, square-built man of about thirty or thirty-five years of age, of prepossessing manner, and look, and shrewd mind. He was evidently a good English education, and is an energetic, impassioned speaker. The doctrines he professes in Washington are similar to those of the Campbelites of the west, laying great stress on baptism “FOR” the remission of sins. He quotes from the New Testament readily in his addresses. He took good care, as there was an intelligent congregation, including several members of congress, present, to say but little about the “Book of Mormon.” He averred, however, that nobody wrote it but him, and that it contained nothing contrary to the Bible, or its virtue. In describing the sufferings of his followers in Missouri he was somewhat eloquent, as has a good voice for the pathetic.

After the meeting was broken up, a gentleman who thought he had concealed studiously in his speech the origin of the “Book of Mormon,” asked him whether the report, that he found it written on gold plates, was true. He said that it was, that it was written in Egyptian and Chaldee, and that some of the plates were now at his house in the county of Ontario, state of New York.

He said, on being questioned as to the account of Mrs. Davidson, (formerly Mrs. Spalding,) of Monson, Mass., that her husband wrote said book—that he had her statement “now” that she never authorized any such account or publication. These statements of Smith you may rely on, as the gentleman who had the conversation with him is well and favorably known in this community, and has no sinister motives to prompt him in the matter.