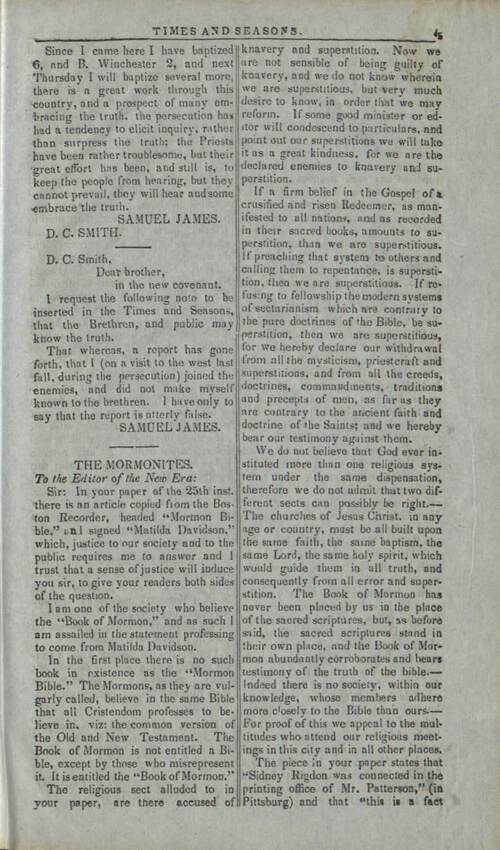 To the Editor of the New Era:

Sir: In your paper of the 25th inst. there is an article copied from the Boston Recorder, headed “Mormon Bible,” and signed “Matilda Davidson,” which, justice to our society and to the public requires me to answer and I trust that a sense of justice will induce you sir, to give your readers both sides of the question.

I am one of the society who believe the “Book of Mormon,” and as such I am assailed in the statement professing to come from Matilda Davidson.

In the first place there is no such book in existence as the “Mormon Bible.” The Mormons, as they are vulgarly called, believe in the same Bible that all Cristendom professes to believe in, viz: the common version of the Old and New Testament. The Book of Mormon is not entitled a Bible, except by those who misrepresent it. It is entitled the “Book of Mormon.”

The religious sect alluded to in your paper, are there accused of knavery and superstition. Now we are not sensible of being guilty of knavery, and we do not know wherein we are superstitious, but very much desire to know, in order that we may reform.

If some good minister or editor will condescend to particulars, and point out our superstitions we will take it as a great kindness, for we are the declared enemies to knavery and superstition.

We do not believe that God ever instituted more than one religious system under the same dispensation, therefore we do not admit that two different sects can possibly be right.—The churches of Jesus Christ, in any age or country, must be all built upon the same faith, the same baptism, the same Lord, the same holy spirit, which would guide them in all truth, and consequently from all error and superstition. The Book of Mormon has never been placed by us in the place of the sacred scriptures, but, as before said, the sacred scriptures stand in their own place, and the Book of Mormon abundantly corroborates and bears testimony of the truth of the bible.—Indeed there is no society, within our knowledge, whose members adhere more closely to the Bible than ours.—For proof of this we appeal to the multitudes who attend our religious meetings in this city and in all other places.

The piece in your paper states that “Sidney Rigdon was connected in the printing office of Mr. Patterson,” (in Pittsburgh) and that “this is a fact [45] well known in that region,” and as Rigdon himself has frequently stated. Here he had ample opportunity to become acquainted with Mr. Spaulding’s manuscript (Romance) and to copy it if he chose.” This statement is utterly and entirely false. Mr. Rigdon was never connected with the said printing establishment, either directly, or indirectly, and we defy the world to bring proof of any such connection. Now the person or persons who fabricated that falsehood would do well to repent, and become persons of truth and veracity before they express such acute sensibility concerning the religious pretensions of others. The statement that Mr. Rigdon is one of the founders of the said religious sect is also incorrect.

The sect was founded in the State of New York, while Mr. Rigdon resided in Ohio, several hundred miles distant. Mr. Rigdon embraced the doctrine through my instrumentality. I first presented the Book of Mormon to him. I stood upon the bank of the stream while he was baptized, and assisted to officiate in his ordination, and I myself was unacquainted with the system until some months after its organization, which was on the sixth of April, 1830, and I embraced it in September following.

The piece further states that “a woman preacher appointed a meeting at New Salem, Ohio, and in the meeting read and repeated copious extracts from the Book of Mormon. Now it is a fact well known, that we have not had a female preacher in our connection, for we do not believe in a female priesthood. It further says that the excitement in New Salem became so great that the inhabitants had a meeting and deputed Doctor Philastus Hurlburt, one of their members, to repair to Spaulding’s widow, and obtain from her the original manuscript of the romance, &c. But the statement does not say whether he obtained the manuscript, but still leaves the impression that he did, and that it was compared with the Book of Mormon. Now whoever will read the work got up by said Hurlburt entitled “Mormonism Unveiled,” will find that he there states that the said manuscript of Spaulding’s romance was lost and could no where be found But the widow is here made to say that it is carefully preserved. Here seems to be some knavery or crooked work; and no wonder, for this said Hurlburt is one of the most notorious rascals in the western country. He was first cut off from our society for an attempt at seduction and crime, and secondly he was laid under bonds in Geauga county, Ohio, for threatening to murder Joseph Smith, Jr., after which he laid the deep design of the Spaulding romance imposition, in which he has been backed by evil and designing men in different parts of the country, and sometimes by those who do not wish to do wrong, but who are ignorant on the subject. Now what but falsehood could be expected from such a person?—Now if there is such a manuscript in exisence, let it come forward at once, and not be kept in the dark. Again, if the public will be patient, they will doubtless find that the piece signed “Matilda Davidson” (Spaulding’s widow) is a base fabrication by Priest Storrs, of Holliston, Mass., in order to save his craft, after losing the deacon of his church, and several of its most pious and intelligent members, who left his society to embrace what they considered to be truth. At any rate, a judge of literary productions, who can swallow that piece of writing as the production of a woman in private life, can be made to believe that the Book of Mormon is a romance. For the one is as much like a romance as the other is like a woman’s composition.

I now leave the subject with a candid public, with a sincere desire, that those who have been deluded with such vain and foolish lies, may be undeceived.