Opposition to the Book of Mormon 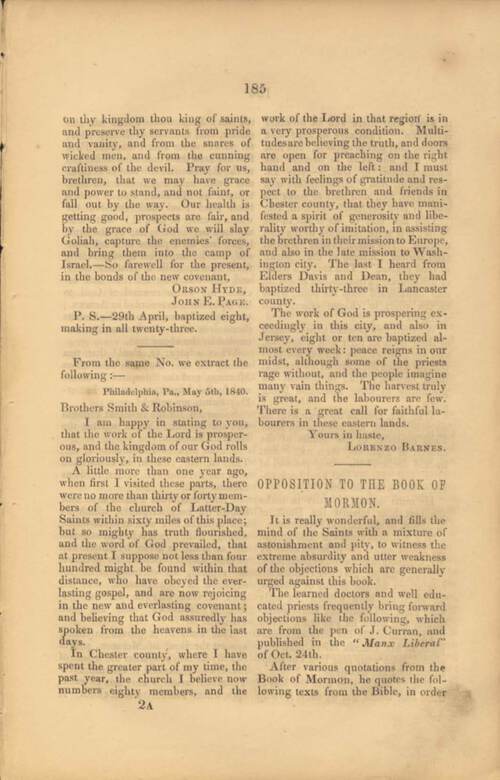 OPPOSITION TO THE BOOK OF MORMON.

It is really wonderful, and fills the mind of the Saints with a mixture of astonishment and pity, to witness the extreme absurdity and utter weakness of the objections which are generally urged against this book.

The learned doctors and well educated priests frequently bring forward objections like the following, which are from the pen of J. Curran, and published in the “Manx Liberal” of Oct. 24th.

After various quotations from the Book of Mormon, he quotes the following texts from the Bible, in order [185] to prove that there can be no other revelation: “Paul says he kept back nothing that was profitable,” and that he “did not shun to declare the whole counsel of God.”—

Acts xx. And again, that “All scripture was profitable, &c., and able to make the word of God perfect.”—Tim. iii. 16.

This last text of his is not in the Bible; it is some scripture of his own making. The passage reads “MAN of God perfect,” instead of the “WORD of God perfect.” This makes a world of difference. Thus he has added to, and diminished from the book, while in the effort to charge others with doing so.

We shall now proceed to notice each of these texts in their proper bearing, and see whether they answer the purpose for which Mr. Curran has brought them forward; viz., to prevent the possibility of more revelation being given.

Will Mr. Curran do away with all scripture which has been given since Paul declared to the elders of the church of Ephesus, Acts xx., “that he had declared the whole counsel of God, and that he had kept back nothing that was profitable?” ! ! !

He must do so, in order to make the text bear against the Book of Mormon, or any further revelation.

We will here record a catalogue of the books which are to be set aside by Mr. Curran’s application of these texts.

John’s gospel, his three epistles, his revelations on the island of Patmos, for all these were written not only after Paul had made the above declaration, but after he was dead. Now if Paul had made the scriptures complete, as Mr. Curran infers, then why should John write four books of scripsure after Paul was dead? ! ! !

What a pity, O, Paul! That you should fall into the same delusion as Mormon, and the “despised deceivers and foolish impostors,” as the Latter-Day Saints are called!

So much for the first text brought forward by Mr. Curran against the Book of Mormon.

I now proceed to his second, viz., Tim. iii. 16.; which, in connection with the xv. and xvii. verses, reads as follows:—

“And that from a child thou hast known the holy scriptures, which are able to make thee wise unto salvation, through faith which is in Christ Jesus. All scripture is given by inspiration of God, and is profitable for doctrine, for reproof, for correction, for instruction in righteousness, that the MAN of God may be perfect, thoroughly furnished unto all good works.”

Mormon had just as good a right to write that which God revealed to him, as Paul had; and the Latter-Day Saints have as good a privilege as either of them—one has as good testimony as the other.

Another text is made use of by Mr. Curran, and by most of our opposers, viz., Rev. xxii.

18: “For I testify unto every man that heareth the words of the prophecy of this book, if any man shall add unto these things, God shall add unto him the plagues that are written in this book.”

This text is brought forward by many, to prove that God will never reveal any more, and that man must never record any more of his word. It is really pitiable, and a source of sorrow and mourning to those who do understand the Word of God, to see even learned men so utterly devoid of all reason and intelligence on these subjects. John had not the whole of the Bible before him, compiled as it now is, and then put his Revelation in the back end for a finish, and then seal up the heavens and the mouth of God from ever revealing more. The book mentioned in the text, refers to his revelation on the Isle of Patmos, which he was then in the act of finishing.

See Rev. i. 11. “What thou seest, write in a book.” Now if any man were to add words or sentences to the revelation of John, so that it would read different from that which he wrote, then they incur the penalty there spoken of. Now we simply ask whether the Book of Mormon is published by us as part of the words of the book which John wrote or received on the Island of Patmos? If so, then that text applies to it; but if not, then that text has not the most distant allusion to it whatever. Neither does that text at all prohibit God from revealing what he pleases, to whom he pleases, and commanding them to write it.