America, and the American Church 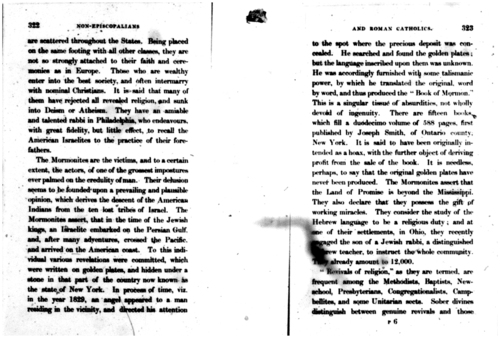 The Mormonites are the victims, and to a certain extent, the actors, of one of the grossest impostures ever palmed on the credulity of man. Their delusion seems to be founded upon a prevailing and plausible opinion, which derives the descent of the American Indians from the ten lost tribes of Israel. The Mormonites assert, that in the time of the Jewish kings, an Israelite embarked on the Persian Gulf, and, after many adventures, crossed the Pacific, and arrived on the American coast. To this individual various revelations were committed, which were written on golden plates, and hidden under a stone in that part of the country now known as the state of New York. In process of time, viz. in the year 1829, an angel appeared to a man residing in the vicinity, and directed his attention [322] to the spot where the precious deposit was concealed.

He searched and found the golden plates; but the language inscribed upon them was unknown.

He was accordingly furnished with some talismanic power, by which he translated the original, word by word, and thus produced the “Book of Mormon.” This is a singular tissue of absurdities, not wholly devoid of ingenuity. There are fifteen books, which fill a duodecimo volume of 588 pages, first published by Joseph Smith, of Ontario county, New York. It is said to have been originally intended as a hoax, with the further object of deriving profit from the sale of the book.

It is needless, perhaps, to say that the original golden plates have never been produced. The Mormonites assert that the Land of Promise is beyond the Mississippi. They also declare that they possess the gift of working miracles. They consider the study of the Hebrew language to be a religious duty; and at one of their settlements, in Ohio, they recently engaged the son of a Jewish rabbi, a distinguished Hebrew teacher, to instruct the whole community. They already amount to 12,000.