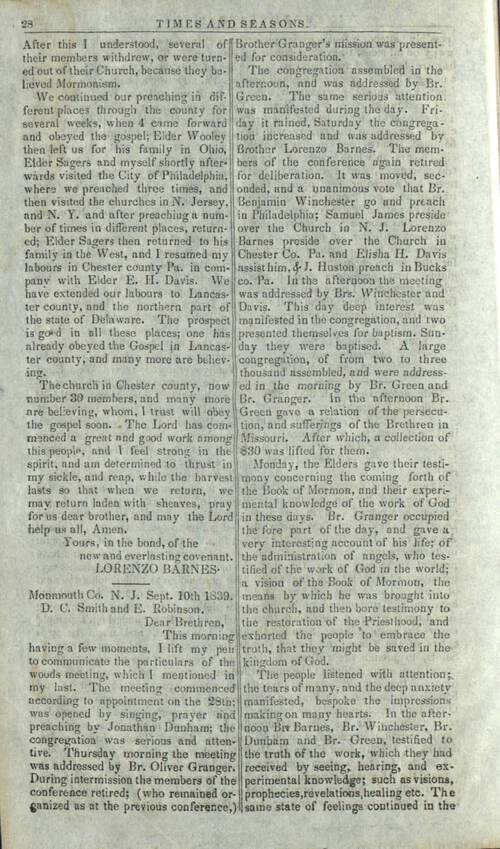 This morning having a few moments, I lift my pen to communicate the particulars of the woods meeting, which I mentioned in my last. The meeting commenced according to appointment of the 28th; was opened by singing, prayer and preaching by Jonathan Dunham; the congregation was serious and attentive.

Thursday morning the meeting was addressed by Br. Oliver Granger. During intermission the members of the conference retired; (who remained organized as at the previous conference,) Brother Granger’s mission was presented for consideration.

The congregation assembled in the afternoon, and was addressed by Br. Green.

The same serious attention was manifested during the day. Friday it rained, Saturday the congregation increased and was addressed by Brother Lorenzo Barnes. The members of the conference again retired for deliberation. It was moved, seconded, and a unanimous vote that Br. Benjamin Winchester go and preach in Philadelphia; Samuel James preside over the Church in N. J. Lorenzo Barnes preside over the Church in Chester Co. Pa. and Elisha H. Davis assist him, & J. Huston preach in Bucks co. Pa. In the afternoon the meeting was addressed by Brs. Winchester and Davis. This day deep interest was manifested in the congregation, and two presented themselves for baptism. Sunday they were baptised. A large congregation, of from two to three thousand assembled, and were addressed in the morning by Br. Green and Br. Granger. In the afternoon Br. Green gave a relation of the persecution, and sufferings of the Brethren in Missouri. After which, a collection of $30 was lifted for them.

Monday, the Elders gave their testimony concerning the coming forth of the Book of Mormon, and their experimental knowledge of the work of God in these days. Br. Granger occupied the fore part of the day, and gave a very interesting account of his life; of the administration of angels, who testified of the work of God in the world; a vision of the Book of Mormon, the means by which he was brought into the church, and then bore testimony to the restoration of the Priesthood, and exhorted the people to embrace the truth, that they might be saved in the kingdom of God.

The people listened with attention; the tears of many, and the deep anxiety manifested, bespoke the impressions making on many hearts. In the afternoon Br. Barnes, Br. Winchester, Br. Dunham and Br. Green, testified to the truth of the work, which they had received by seeing, hearing, and experimental knowledge; such as visions, prophecies, revelations, healing etc. The same state of feelings continued in the [28] congregation, while the spirit of God rested down upon some with mighty power. Truly it was a solemn and interesting time. Tuesday a large congregation assembled, Samuel James addressed them. In the afternoon he gave the testimony he had received of the truth of the work, exhorted the people, gave an invitation for baptism, assembled at the water and baptized eight; made several appointments, at some of which there are others to be baptized; these appointments have been fulfilled and six more were baptized; and last Sunday fourteen were confirmed, while solemnity, and seriousness pervaded the congregation. Thus truth prevails; the power of the spirit attends the preaching the word; conviction takes possession of the heart and leads its subjects to the door, and entering in, they are made to rejoice in the Holy One of Israel. May the Lord carry on his work, until the nations have heard, the saints gathered home, the earth claensed, and the kingdom established for ever. Brethren, let us be up and doing, the time is short, and the kingdom is at hand.