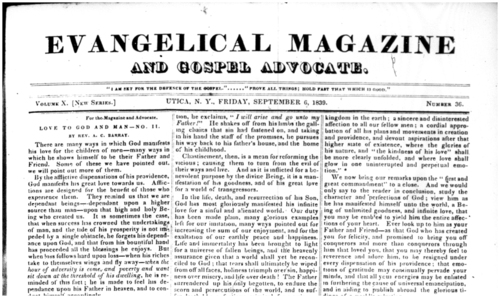 For the Magazine and Advocate.

Br. GROSH—As some of your readers desire to know what are the religious opinions of the “latter day Saints,” I will attempt to give you a part of the information, derived from an attentive perusal of some of their publications; and more especially from a several days’ protracted and very friendly conversation with one of their Elders, (Hiram J. Brown,) who, though not a literary man, seems to be very well acquainted with our Bible, and with latter day Saints literature in general.

They attempt to prove their doctrine by the Old and New Testament, upon which we build our faith, which they interpret in the most literal manner. And though I have been a diligent student of the Bible for years, and expected to have involved my friend in a labyrinth of inextricable difficulties and contradictions, I assure you that my expectations were utterly disappointed.

The answer to Br. J. Shrigley’s interrogatory (Magazine and Advocate, June 7) is, that though the punishment, or rather the places of it, (hell and lake of fire,) will exist as long as God, yet none of his creatures will remain in it beyond a certain time, longer or shorter according to their several demerits. They say that after the “first” resurrection, when death and hell shall be cast into the lake of fire, (Rev. xx: 14,) all sinners will be liberated from hell, cleansed from all evil propensities, except the false prophets, whose character, they say, is described in Heb. vi: 4, 5, 6, and Matt. xii: 31; and even these, who had received the priesthood, of which they can never be deprived, and by virtue of which they are enabled to work miracles, etc., (Rev. xix: 20,) are to be restored to the celestial kingdom so soon as they make a public and sincere acknowledgement of their error. Thus you see that the latter day Saints are restorationists to the fullest extent.—

They argue that all punishment not intended to, or which in its nature can not, reform, attributed to God, accuses him of tyranny; and that there is no escape from deserved punishment, and no substitute can suffer it instead of the guilty.

They believe there are three heavens; the Telestial, the Terrestrial, and the Celestial; in the last of which God and Christ reside, and where alone, absolute perfection can be attained by the Saints, and which will be located on our earth after the second resurrection with the New Jerusalem, fifteen hundred miles square and of the same height. Rev. xxi: 2, 3, 16, etc. The other two kingdoms (heavens) are in other spheres, and will be freely opened to all mankind after the second resurrection, where they will enjoy a degree of glory far transcending any thing that has ever entered the mind of mortal, even in the Telestial, which is the least glorious kingdom. Their joy does not consist in any kingdom in “the rapturous gaze,” as some poets have it, but in activity in all, and progression in wisdom and knowledge in the Celestial and Terrestrial without end or limit; though these can never arrive at perfection, nor ever be introduced into the Celestial kingdom, to enjoy the immediate presence of God and Christ, and enter on the work of creating, in which all its inhabitants are engaged. And here they appeal to the changes going on in the universe, as revealed by the science of Astronomy. Nor are they alone in this hypothesis:—

Professor Dick, from whom they frequently quote, has treated it largely in his Christian Philosopher, Philosophy of religion, and of a future state.

They say, God does nothing in vain; nor does he act like a child building up and destroying its own works; but argue that he goes on creating, renovating and purifying his works in endless succession—that whilst the inhabitants of one planet attain such a state of purity as to be introduced through the resurrection into a higher state of glorious existence, those of another are progressing towards the same, and those of a third may be in the infancy of their existence— hence the necessity of a continued existence of a prison to reward every inhabitant of those other planets and other systems according to their several deserts.

They believe no person can enter the Celestial kingdom without baptism by immersion, administered by one who has received the priesthood in regular order from God, an angel of celestial order, or another priest of the order of Melchisedec, (Christ,) and who has received the Holy Ghost by the laying on of hands, who confers the power of prophecing, working miracles, etc., etc. The only exception (Acts x: 44) was absolutely necessary to convince Peter that the Gospel blessings were intended for Gentiles as well as Jews.

The great whore, (Rev. xvii: 1, etc.,) they say, signifies the church of Rome; and the harlots, the Protestant denominations; and taken together they compose the great city Babylon, the mother of harlots, etc., Rev. xvii: 5, composed of fifteen kings, (verses 10, 12,) nations, peoples, multitudes and tongues, (15;) she sitteth upon seven mountains, (9,) and upon many waters, (1.) For, say they, Babylon signifies confusion, and who will deny that confusion reigns among them all?

They say certain signs, which are enumerated by Christ. Mark xxvi: 17, 18. And by Paul, I Cor. xii: 8, 9, 10, should follow those who believed the apostles’ testimony, which are not only not found among the sects in our day, but all denominations, except the latter day Saints and the Irvinites of England, deny that any such signs do, or ever will follow believers again; though they did follow the apostles, those who believed the preaching of the apostles, (Acts x: 46, and xix: 1, 2, 3, 4, 5, 6,) and the seventy, (Luke x: 17,) and the gift has never been recalled by the Giver. These signs following believers, say they, is the testimony of Jesus, (Rev. xix: 10,) and constitutes the power of godliness; and all who deny it have nothing left but the form, (2 Tim. iii: 5,) which has no better foundation than tradition, which can never constitute knowledge, whatever may be the evidence upon which it rests. This power, they say, was lost soon after the apostle’s time, when the Gospel began to be adulterated with heathen traditions; but is now measurably restored to the latter day Saints, and will be exercised in its pristine splendor so soon as they attain a greater degree of faith and holiness. They are already able to heal their sick, and are in constant intercourse with the celestial world, having the spirit of prophecy, of visions, of discerning spirits, of speaking with tongues, and of interpretation, etc.

With regard to our planet, they believe there will be millennium of a thousand years duration, (Rev. xx: 4, 5.) which will commence in 1847, by the rebuilding of Jerusalem, etc. At the commencement, the devil (they believe in a personal devil) will be cast into the bottomless pit, (verses 2, 3,) and during its continuance those high wrought descriptions of Isaiah (xi, and xii,) will be literally and exactly fulfilled. But before the ushering in of this long looked for period, nation will rise against nation, and kingdom against kingdom; and, aided by the plagues described in the Apocalypse, will destroy one another till only one third (Zech. Xii: 8) of all the inhabitants of the earth remain. Then will this remnant make war against the latter day Saints, who have remained spectators, and they (the Saints) will arise, aided by the Israelites, consisting of the descendants of Ephraim and Manasseh, (who were the sons of Joseph,) namely, our Indians, and the ten tribes inhabiting the north polar region, who will all have been converted by the Gospel; and one of this army shall chase a thousand, and two put ten thousand to flight, (Josh. xxiii: 10; Deut. xxxii: 30,) before their commander Christ Jesus riding the white horse, (Rev. xix: 11); and the prophecies (Rev. xiv: 20; xix: 21; Isa. xiv, 2) and a great number of others, which never have been, shall then be literally fulfilled. From these dreadful calamities the latter day Saints are desirous of saving us. This last paragraph I have inferred from hints dropped in conversation, and from my friend’s quotations; it may therefore not be exactly stated as he believes it, as he declined stating minutely.

Their prophecies prohibit the latter day Saints from making war, but if assailed they are commanded to offer peace to their enemies three times; and if still persecuted, they must consult God before they defend themselves. Their revelations enjoin a peaceable and quiet conduct, good morals, and kindness towards all men. They are very strenuous advocates for the pursuit of knowledge. And instead of being persecuted and put to death, as some infamous fanatics have done, they should be treated as friends belonging to the great human family.

They are guided in all their important pursuits by direct revelations, (as they believe,) have visions, see signs in the heavens, such as armies on horseback, the appearance of blood, etc., etc., in which they place implicit confidence, and are surprised at our not seeing the same. In all of which I believe they are sincere. Those who are best acquainted with the history of the human mind, know best how greatly a person, whose mind has been long occupied with such contemplations, may be deceived. Volumes might be filled with such instances. The history of Baron Van Swedenborg alone, is sufficient to convince any one of the fact. Nor do I doubt that they have often succeeded in curing certain forms of sickness among their adherents. The body is very much under the influence of the mind, and every well informed physician knows of what importance it is to secure even a share of his patient’s confidence. How much greater, then, the effect where faith is stronger than death? The metallic tractors of by gone years, and the infinitesmal doses of Haneman’s medicine have cured thousands on this principle. But when the dead are raised, where faith can have no influence, we are bound to acknowledge the interposition of Almighty Power.

P. S. Mr. Hiram J. Brown has been separated from his brethren without knowing where to address any of them; if this should meet their eye, they will confer a favor by addressing—