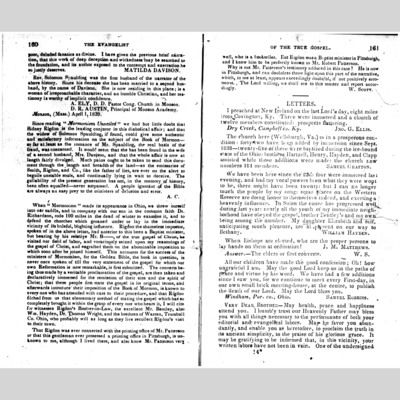 When “Mormonism” made its appearance in Ohio, we threw ourself into our saddle, and in company with our son in the common faith Dr. Richardson, rode 100 miles in the dead of winter to examine it, and to defend the churches which groaned under or lay in the immediate vicinity of its baleful, blighting influence. Rigdon the shameless impostor, spoken of in the above letter, had anterior to this been a Baptist minister, but hearing by his relative Mr. B——, of the true gospel of Christ, he visited our field of labor, and voraciously seized upon my reasonings of the gospel of Christ, and engrafted them on the abominable imposition to which soon after he joined himself. This accounts for the success of the ministers of Mormonism, for the Golden Bible, the book in question, is never one spoken of till the very statement of the gospel for which our own Reformation is now remarkable, is first submitted. The converts being thus made by a veritable proclamation of the gospel, are then taken and declaratively immersed for the remission of their sins and the spirit of Christ; that these people first state the gospel in its original terms, and afterwards introduce their imposition of the Book of Mormon, is known to every one who has attended with care to their procedure, and that Rigdon filched from us that elementary method of stating the gospel which has so completely brought it within the grasp of every one who hears it, I will cite for witnesses Rigdon’s Brother-in-Law, the excellent Mr. Bentley, also Wm. Hayden, Dr. Thomas Wright, and the brethren of Warren, Trumbull Co. Ohio, who probably will as long as they live recollect Rigdon’s visit to their town.

Why is not Mr. Patterson’s testimony adduced in this case? He is now in Pittsburgh, and can doubtless throw light upon this part of the narrative, which, to me at least, appears exceedingly doubtful, if not positively erroneous. The Lord willing, we shall see to this matter and report accordingly.