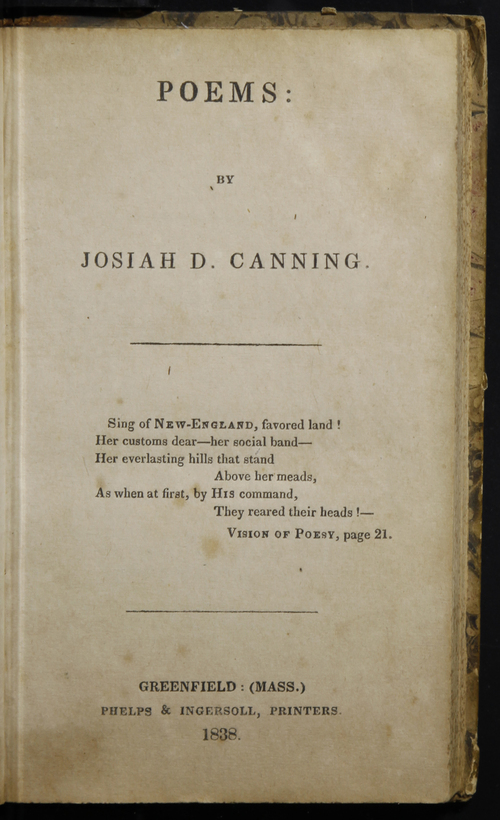 Now Mormon, with his golden plates,∗

Says he has opened heaven’s gates, And hangs out many tempting baits To prove the fact;

And old Joe Smith, his agent, prates With school-boy tact.

His flock have gone far to the west To seek some promised land of rest, Where other sects can ne’er molest, Nor day, nor night.

They’ll never cease on earth their quest, If rumor’s right.

Here in our own, our goodly land, Some zealot has enrolled a band, Whose object is to take command From heaven, I think!

The last accounts they seemed to stand Upon the brink.

They hold that while a thing of earth, A soul that’s had the “second birth”

Possesses all exalted worth That angels have;

And truly it excites to mirth To hear them rave.

They think the great and high Supreme A being worthy of esteem! [107]

And then their worthless selves they deem As angels holy,

Alike unknown to guilty shame, To sin or folly!

That heathenism should be done

∗ Every one, it is presumed, is familiar with the history of this singular sect; and with their formation from the pretended discovery of some golden plates, revealing the book of Mormon.

Headed by their principal leader, Joe Smith, they journied to the far west to seek the “New Jerusalem,” as they termed it. Instead thereof, however, they found fighting and bloodshed.

’S a crying shame—a grievous one; And into jail The imps should tarred and feathered run, Or ride a rail.