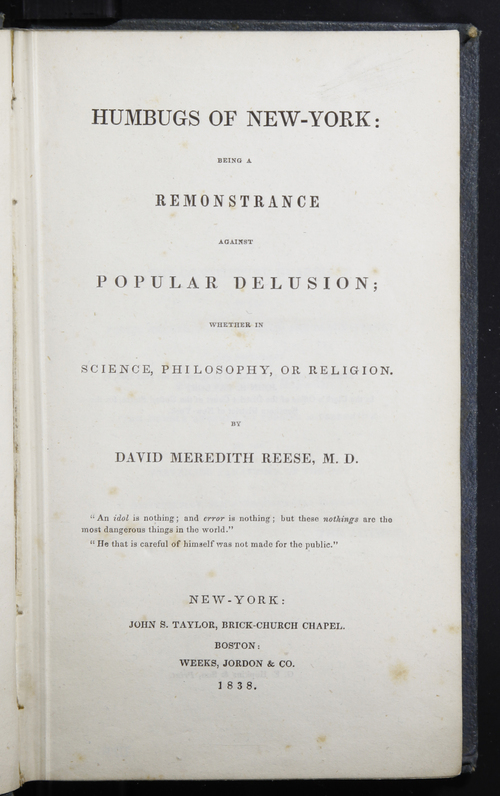 HUMBUGS OF NEW-YORK BEING A REMONSTRANCE AGAINST POPULAR DELUSION;

WHETHER IN SCIENCE, PHILOSOPHY, OR RELIGION.

“An idol is nothing; and error is nothing; but these nothings are the most dangerous things in the world.”

“He that is careful of himself was not made for the public.”

Since this work has been in the press, although but a few weeks have elapsed, another has been added to the religious humbugs which already abound in this great city. It is scarcely credible, and yet it is a lamentably true, that the horrid profanities and unblushing blasphemies of MORMONISM! have been belched forth to crowds of gaping fools in the city of New-York. The agent in this new monstrosity, calling himself an ELDER, has found a professed minister and Christian congregation, so called, in our midst, who have allowed the Sabbath to be outraged and their temple of religion desecra- [264] ted by the public propagation of the mysteries of Mormonism! The effect has been precisely as with any and every other imposture however foul and revolting to truth and decency. Multitudes who believe in “Animal Magnetism,” subscribe to “Phrenology,” are the willing victims of every form of “Quackery,” and have adopted the creed and practice of “ultraism;”—multitudes of such, have gathered around this Mormon oracle, and drank in wisdom from his “golden bible!” The entire community of infidels at Tammany Hall, hailed his arrival as auxiliary to their case, and welcomed him to their Temple of Reason, substituting his ministrations for their own Atheistical exhibitions on the Sabbath day. And the “half has not yet been told,” for already scores of disciples have been rallied around the standard of Mormonism, from among the members of Christian churches! many of whom have been re-baptised by this ELDER, into the new religion! and thus this most shocking humbug has been domiciliated among us. Nor will it cease to spread, until like the kindred enormities of Matthias, some high-handed and out-breaking iniquity shall wind up its history in pollution, infamy and blood.