Supplement to the Connecticut Courant 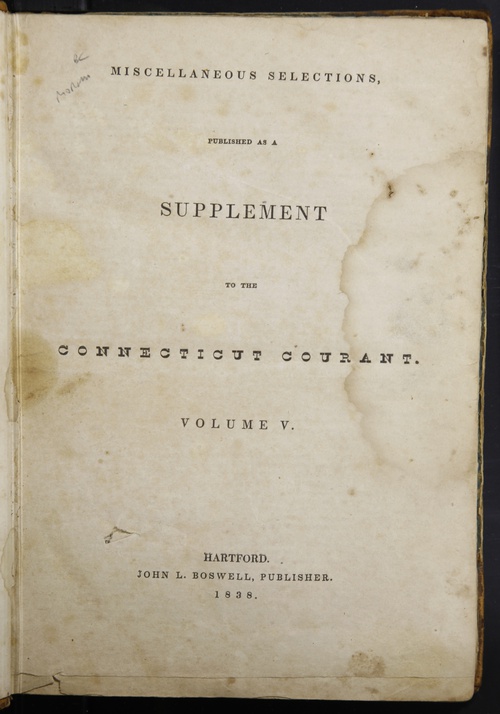 We copy the following notice of this new religion.

In the village of Palmyra, in the western part of the State of New York, an idiot, said to have been dumb from his birth, suddenly gave out, a few years ago, that ‘one night’ he had a visit from an angel, who told him to rise from his bed and follow him.—He did so; and was conducted by his visitor to a remote and retired spot, where lay a large flat stone, having a ring in the middle of it. This stone was about five feet long, three broad, and eight or nine inches thick.

On arriving at the place in question, the angel commanded the idiot, whose name was Joe Smith, to take up the stone by the ring. Smith, as well he might, hesitated to comply with such an order, when his companion told him to take it up boldly, for, if he only had ‘faith,’ God would instantly give him strength to perform the herculean task. Having prayed inwardly for some minutes, Joe took off his coat, and was making preparations for the performance; but the angel reproved him for his want of faith, made him replace his coat upon his shoulders, and that even “if the stone weighed ten thousand tons, divine assistance, through saving faith, would enable him to lift it.”

Joe became passive in the hands of the angel, grasped the ring, and found, to his astonishment, that the stone weighed as nothing in his hands! On removing it, the idiot discovered that it had served as a covering to a box or chest of the same material, under which were deposited ‘twelve golden plates or tables,” engraven all over with mystical characters. Upon the upper plate lay a ‘pair of spectacles’ made of freestone, (save the mark,) which the angel commanded Smith to place astride of his nose. On doing so, Joe’s ‘tongue was loosened,’ as he himself states, and his intellect instantly became like those of other men. He saw through the freestone and the engraving on the golden plates became perfectly intelligible to him. The angel then commanded him to associate with himself ‘twelve other men,’ whom he named as ‘Scribes,’ and to interpret to them the writing on the plates. When the work was completely written out, they took it to a printer who demanded $500 in advance for his share in the business. Hereupon the conclave, by dint of pawning, borrowing, selling and ‘finding,’ raised the stipulated sum. The book was left with the printer, and the authors were desired to call at the end of a month, when the work would be completed. They now went and voluntarily made oath before a justice of the peace that they had written for the dictation of Smith, who, until the time of the angel’s visit, had been dumb and an idiot from his birth, and that they had seen the twelve golden tables and the stone spectacles; adding, that no one except Smith could see through them.’ At the expiration of the month they returned to the man of types and demanded their books. The disciple of Caxton met them with a long face, and told them that the whole of the first sheet (16 pages) had been thrown down; and that the manuscripts not having been preserved, he had not been able to fulfil his agreements by the stipulated time; but that, if they would write it over again, he would, of course, print it at his own expense. The Prophets were astounded at this intelligence, and as they had kept no copy of their work, despaired of replacing the inspired writings—thereupon the printer, by way of removing the difficulty, advised them to ‘take another look at the golden plates.’

The despairing Mormonites took the hint, and returned with sixteen pages of fresh matter, which the printer immediately composed.

On the publication of the book, the printer worked off and published the 16 original pages, which he pretend to have lost, and which were altogether different from those they had brought him the second time. This created a terrible sensation among the scribes, who were now called upon by the perfidious printer to produce the plates.

Twelve golden tablets, each of the size of a large tea tray, are not very easy to be procured—but the angel was good enough to step in once more to their aid. The conclave made oath that the angel had taken the tables to heaven on the completion of the work:—the stone spectacles, however, and the stone chest, were produced in evidence, and multitudes of persons were found to be noodles enough to believe the absurd story.

The writer of this, travelling in 1830 through the State of New York, fell into company with a drover whose uncle had been choused out of $8,000 by these fellows. Multitudes had joined them, selling all their property, and throwing the proceeds into the common stock, and they have several establishments, one of which is in the State of Ohio, where they herd together after a most edifying fashion. Of course chastity is not among the number of their cardinal virtues. They profess a hearty contempt for all unbelievers, and are noted for the promptitude with which they consign to ‘everlasting fire and brimstone’ all not of their own persuasion.

The doctrinal book of the Mormonites, by them called “The Bible,” has with them entirely superseded the Old and New Testaments. A copy of this book arrived lately in London, and is now in possession of a gentleman residing at Brompton.—It is a tolerably thick and closely printed octavo volume, and is divided into a number of books, called after the names of their supposed authors;-of these the first is the BOOK OF MORMON, which has given its name to the whole volume. It is a singular fact that, in the Greek language, the word Mormon signifies a mischievous fool or idiot. The style and language of this new Bible are an awkward imitation of those of the Old Testament. The book abounds in grammatical blunders and Yankey-isms, and is by no means sparing in marvellous relations of cruelty, murder, and rapine. There is hardly a glimpse of meaning in many passages of it, and the whole is put together, in a rambling unconnected manner, which plainly evinces it to be the work of a person, or persons, wholly unaccustomed to literary composition. It is too absurd for criti- [175] cism, and too brutishly depraved and ignorant to allow of its giving amusement to the reader by this folly.— London Paper.