Review of Parley P. Pratt, A Voice of Warning

A Voice of Warning 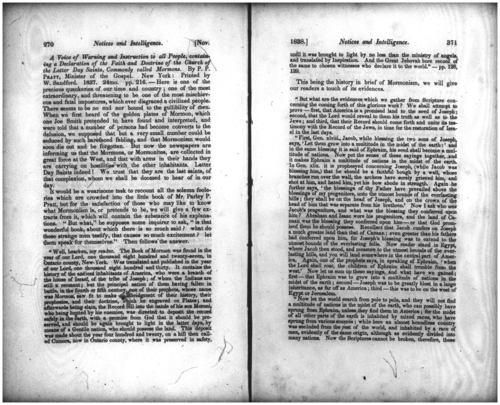 A Voice of Warning and Instruction to all People, containing a Declaration of the Faith and Doctrine of the Church of the Latter Day Saints, Commonly called Mormons. By P. P.

PRATT, Minister of the Gospel. New York: Printed by W. Sanford. 1837. 24mo. pp. 216.—Here is one of the precious quackeries of our time and country; one of the most extraordinary, and threatening to be one of the most mischievous and fatal impostures, which ever disgraced a civilized people. There seems to be no end or bound to the gullibility of men. When we first heard of the golden plates of Mormon, which on Joe Smith pretended to have found and interpreted, and were told that a number of persons had become converts to the delusion, we supposed that but a very small number could be seduced by such barefaced fabling, and that Mormonism would soon die out and be forgotten. But now the newspapers are informing us that the Mormons, or Mormonites, are collected in great force at the West, and that with arms in their hands they are carrrying on hostilities with the other inhabitants. Latter Day Saints indeed! We trust that they are the last saints, of that complexion, whom we shall be doomed to hear of in our day.

It would be a wearisome task to recount all the solemn fooleries which are crowded into the little book of Mr. Parley P. Pratt, but for the satisfaction of those who may like to know what Mormonism is, or pretends to be, we will give a few extracts from it, which will contain the substance of his explanations. “But what,” he supposes some inquirer to ask, “is that wonderful book, about which there is so much said? what do these strange men testify, that causes so much excitement? let them speak for themselves.” Then follows the answer.

“Well, hearken, my reader. The Book of Mormon was found in the year of our Lord, one thousand eight hundred and twenty-seven, in Ontario county, New-York. Was translated and published in the year of our Lord, one thousand eight hundred and thirty. It contains the history of the ancient inhabitants of America, who were a branch of the house of Israel, of the tribe of Joseph; of whom the Indians are still a remnant; but the principal nation of them having fallen in battle, in the fourth or fifth century, one of their prophets, whose name was Mormon, saw fit to make an abridgment of their history, their prophesies, and their doctrine, which he engraved on Plates; and afterwards being slain, the Record fell into the hands of his son Moroni, who being hunted by his enemies, was directed to deposit the record safely in the earth, with a promise from God that it should be preserved, and should be again brought to light in the latter days, by means of a Gentile nation, who should possess the land. This deposit was made about the year four hundred and twenty, on a hill then called Cumora, now in Ontario county, where it was preserved in safety, [270] until it was brought to light by no less than the ministry of angels, and translated by Inspiration. And the Great Jehovah bore record of the same to chosen witnesses who declare it to the world.” —pp. 128, 129.

This being the history in brief of Mormonism, we will give our readers a touch of its evidences.

“But what are the evidences which we gather from Scripture concerning the coming forth of this glorious work? We shall attempt to prove—first, that America is a promised land to the seed of Joseph; second, that the Lord would reveal to them his truth as well as to the Jews; and third, that their Record should come forth and unite its testimony with the Record of the Jews, in time for the restoration of Israel in the last days.

“First, Gen. xlviii., Jacob, while blessing the two sons of Joseph, says, ‘Let them grow into a multitude in the midst of the earth:’ and in the same blessing it is said of Ephraim, his seed shall become a multitude of nations. Now put the sense of these sayings together, and it makes Ephraim a multitude of nations in the midst of the earth. In Gen. xlix. it is prophesyed concerning Joseph, (while Jacob was blessing him,) that he should be a faithful bough by a well, whose branches run over the wall, the archers have sorely grieved him, and shot at him, and hated him, yet his bow abode in strength. Again he further says, ‘the blessings of thy Father have prevailed above the blessings of my progenitors, unto the utmost bounds of the everlasting hills; they shall be on the head of Joseph, and on the crown of the head of him that was separate from his brethren.’ Now I ask who was Jacob’s progenitors, and what was the blessing they conferred upon him? Abraham and Isaac were his progenitors, and the land of Canaan was the blessing they conferred upon him—or that God promised them he should possess. Recollect that Jacob confers on Joseph a much greater land than that of Canaan; even greater than his fathers had conferred upon him, for Joseph’s blessing was to extend to the utmost bounds of the everlasting hills. Now reader stand in Egypt, where Jacob then stood, and measure to the utmost bounds of the everlasting hills, and you will land somewhere in the central part of America. Again, one of the prophets says, in speaking of Ephraim, ‘when the Lord shall roar, the children of Ephraim shall tremble from the west.’ Now let us sum up these sayings, and what have we gained; first— that Ephraim was to grow into a multitude of nations in the midst of the earth; second—Joseph was to be greatly blest in a large inheritance, as far off as America; third—this was to be on the west of Egypt or Jerusalem.

“Now let the world search from pole to pole, and they will not find a multitude of nations in the midst of the earth, who can possibly have sprung from Ephraim, unless they find them in America; for the midst of all other parts of the earth is inhabited by mixed races, who have sprung from various sources; while here an almost boundless country was secluded from the rest of the world, and inhabited by a race of men, evidently of the same origin, although as evidently divided into many nations. Now the Scriptures cannot be broken, therefore, these [271]

Scriptures must apply to America, for the plainest of reasons—because they can apply no where else.” — pp. 131−133.

Very plain, indeed; and as the second and third positions are established in an equally convincing manner, we will omit the arguments in proof of them, and pass over to the practical part of the subject.

“So much then we have produced from the Scriptures, in proof of a work like the book of Mormon, making its appearance in these days; to say nothing of Isaiah xxix., which we have already noticed in a former part of his work.—But says one, what use is the book of Mormon, even if it be true?—I answer, first it brings to light an important history before unknown to man.

Second, it reveals the origin of the American Indians, which was before a mystery. Third, it contains important prophesies, yet to be fulfilled, which immediately concerns the present generation, and their very existence depends on an immediate understanding of them. Fourth, it contains much plainness in regard to points of doctrine, insomuch that all may understand, and see eye to eye, if they take pains to read it.”—pp. 135, 136.

In the midst of all these high and cloudy pretensions of the Mormons there seems to be a political end in view, which it may not be amiss for us to keep in mind, as the events of our Western history are transpiring. This end is expressed in the following, among other passages of Mr. Parley P. Pratt’s Voice of Warning.

“And here is the end of the matter; and I would only add, that the government of the United States has been engaged for upwards of seven years, in gathering the remnant of Joseph, (the Indians,) to the very place where they will finally build a New Jerusalem; a city of Zion; with the assistance of the believing Gentiles, who will gather with them from all the nations of the earth; and this gathering is clearly predicted in the Book of Mormon, and other revelations, and the place before appointed, and the time set for its fulfilment; and except the Gentiles repent of all their abominations, and embrace the same covenant, and come into the same place of gathering, they will soon be utterly destroyed from off the face of this land: as it is written by Isaiah, the nation and kingdom that will not serve thee, shall perish.” [272]