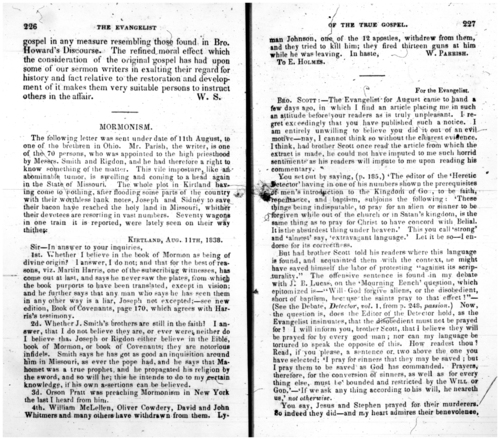 The following letter was sent under date of 11th August, to one of the brethren in Ohio. Mr. Parish, the writer, is one of the 70 persons, who was appointed to the high priesthood by Messrs. Smith and Rigdon, and he had therefore a right to know something of the matter. This vile imposture, like an abominable tumor, is swelling and coming to a head again in the State of Missouri. The whole plot in Kirtland having come to nothing, after flooding some parts of the country with their worthless bank notes, Joseph and Sidney to save their bacon have reached the holy land in Missouri, whither their devotees are resorting in vast numbers. Seventy wagons in one train it is reported, were lately seen on their way thither:

Sir—In answer to your inquiries,

1st. Whether I believe in the book of Mormon as being of divine origin? I answer, I do not; and that for the best of reasons, viz. Martin Harris, one of the subscribing witnesses, has come out at last, and says he never saw the plates, from which the book purports to have been translated, except in vision; and he further says that any man who says he has seen them in any other way is a liar, Joseph not excepted; —see new edition, Book of Covenants, page 170, which agrees with Harris’s testimony.

2d. Whether J. Smith’s brothers are still in the faith? I answer, that I do not believer they are, or ever were; neither do I believe that Joseph or Rigdon either believe in the Bible, book of Mormon, or book of Covenants; they are notorious infidels. Smith says he has got as good an inquisition around him in Missouri, as ever the pope had, and he says that Mahomet was a true prophet and he propagated his religion by the sword, and so will he; this he intends to do to my certain knowledge, if his own assertions can be believed.

3d. Orson Pratt was preaching Mormonism in New York the last I heard from him.

4th. William McLellen, Oliver Cowdery, David and John Whitmers and many others have withdrawn from them. Ly- [226] man Johnson, one of the 12 apostles, withdrew from them, and they tried to kill him; they fired thirteen guns at him while he was leaving. In haste, W. PARRISH.