Argument to argument where to find it 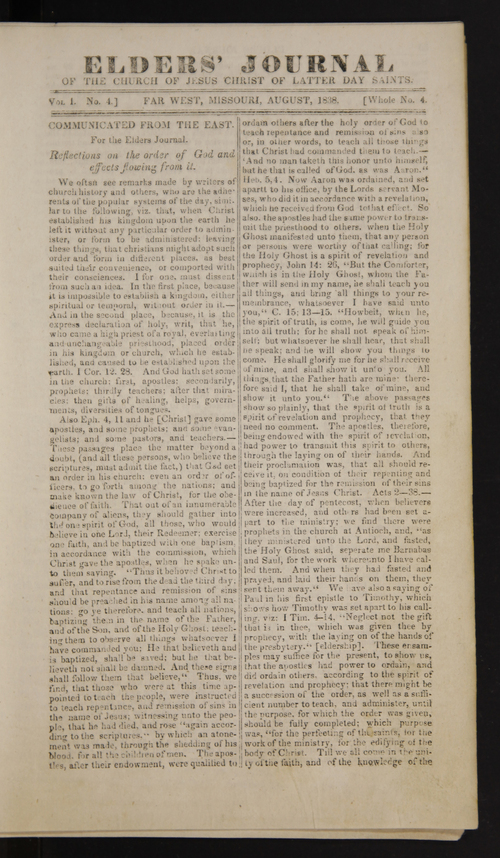 “Argument to argument where to find it; Ridicule to ridicule, and scorn to scorn.” Elders’ Journal of the Church of Jesus Christ of Latter Day Saints (Far West, Missouri) 1, no. 4 (August 1838): 59–60.

. . . Is it any wonder then, that we say of the priests of modern days, that they are of satan’s own making, and are of their father the devil. Nay verily nay: for no being but a scandalous sycophant, and base hypocrite, would say other ways. As it was with Doctor Philastes Hurlburt, so it is with these creatures. While Hurlburt was held in bounds by the church, and made to behave himself, he was denounced by the priests as one of the worst of men, but no sooner was he excluded from the church for adultery, than instantly he became one of the finest men in the world, old deacon Clapp of Mentor ran and took him and his family into the house with himself, and so exceedingly was he pleased with him, that purely out of respect to him, he went to bed to his wife. This great kindness and respect, Hurlburt did not feel just so well about but the pious and deacon gave him a hundred dollars and a yoke of oxen, and all was well again.

This is the Hurlburt, that was author of a book which bears the name of E. D. Howe, but it was this said Hurlburt that was the author of it; but after the affair of Hurlburt’s wife and the pious old deacon, the persecutors thought it better to put some other name [59] as author to their book than Hurlburt, so E. D. Howe substituted his name. The change however was not much better. Asahel Howe one of E. D’s. brothers who was said to be the likeliest of the family, served a prenticeship in the work house in Ohio, for robbing the post office. And yet notwithstanding all this, all the pious priests of all denominations, were found following in the wake of these mortals.

Hurlburt and the Howe’s, are among the basest of mankind, and known to be such; and yet the priests and their coadjutors hail them as their best friends, and publish their lies, speaking of them in the highest terms. And after all this, they want us to say, that they are pious souls and good saints. Can we believe it? surely men of common sense will not ask us to do it.

Good men loves to associate with good men; and bad men with bad ones; and when we see men making friends with drunkards, thieves, liars, and swindlers, shall we call them saints?

If we were to do it, we might be justly charged with “partaking of their evil deeds.”

Therefore until we have more evidence than we have now, we shall always think when we see men associating with scoundrels, that they themselves are scoundrels. And there we shall leave them for the present, firmly believing, that when the day of decision has come, that we shall see all the priests who adhere to the sectarian religions of the day, with all their followers, without one exception, receive their portion with the devil and his angels.